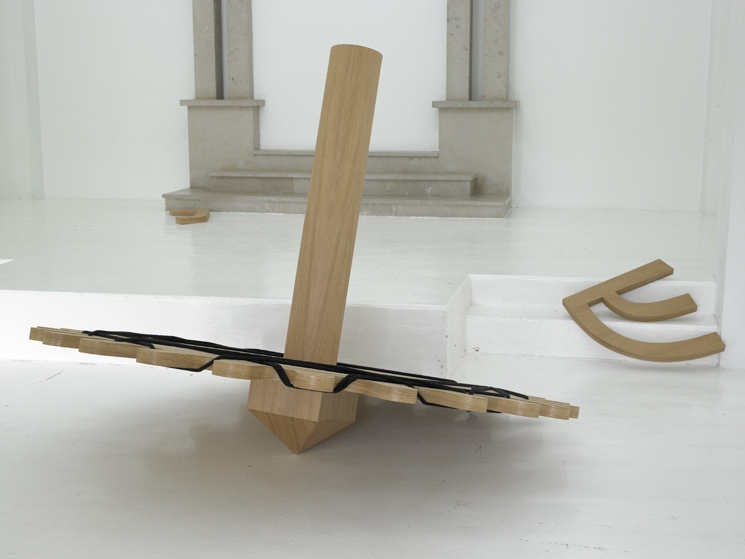 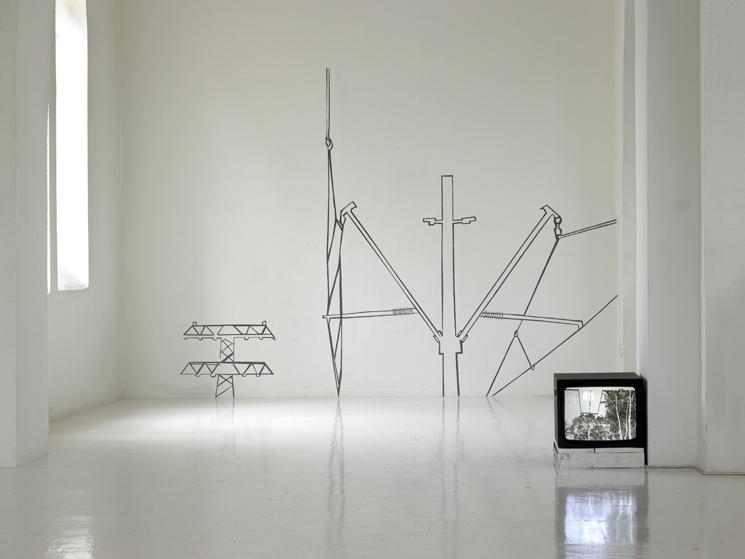 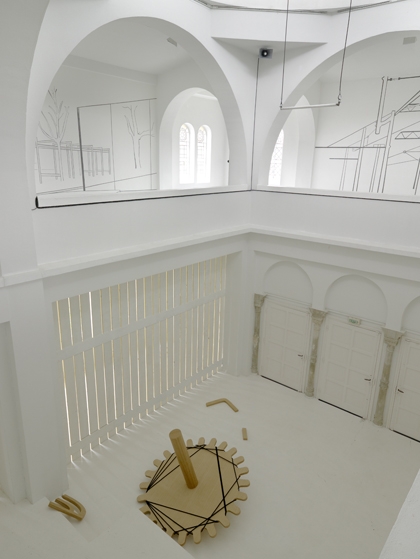 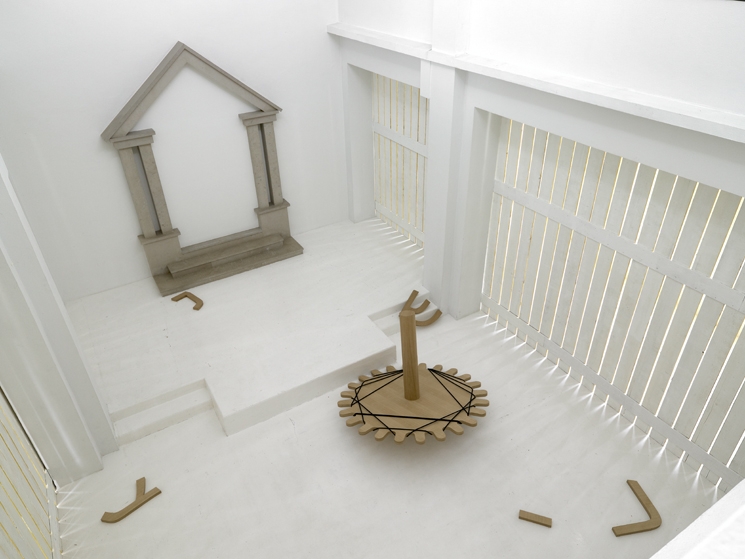 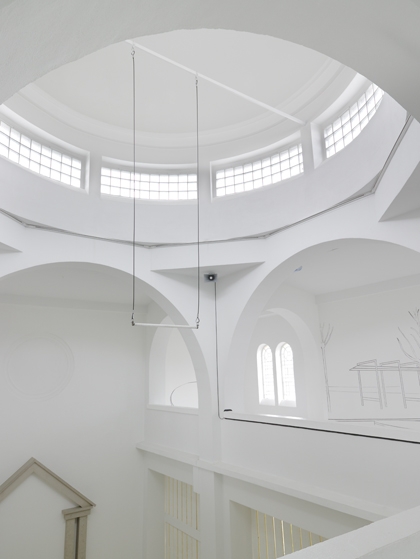 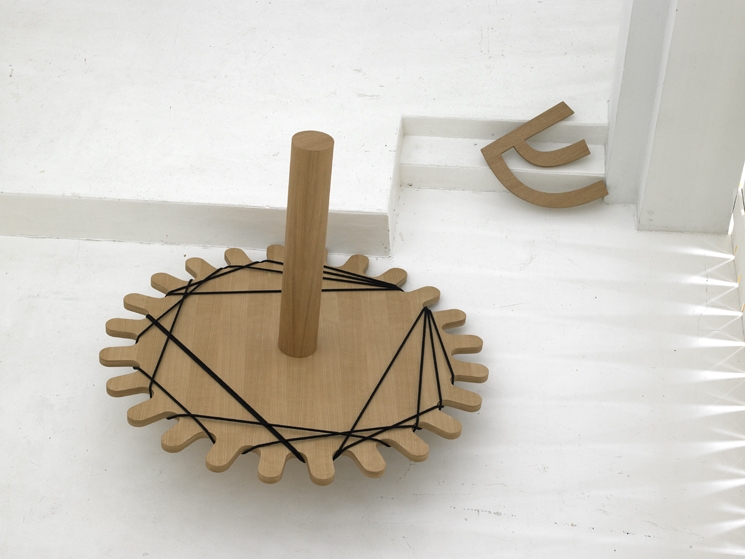 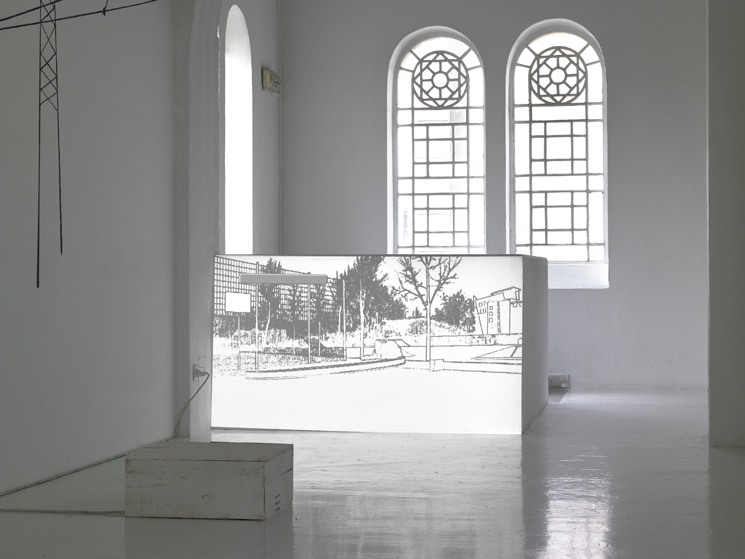 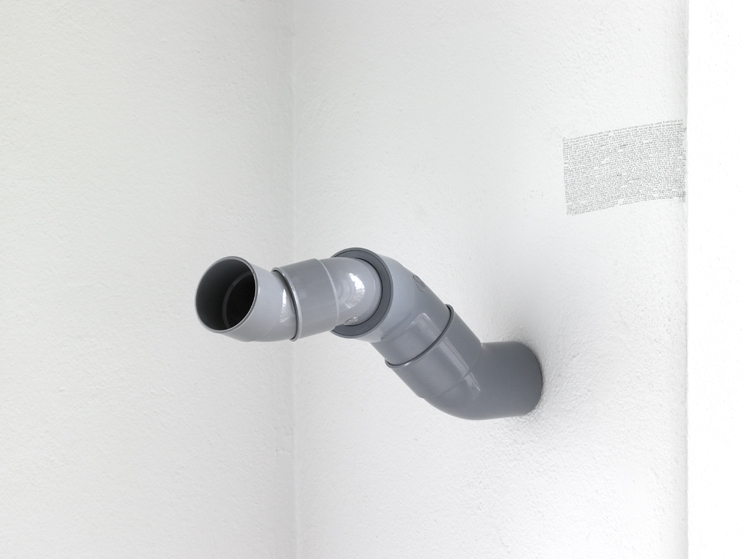 Almost every word I write jars against the next, I hear the consonants rub leadenly against each other and the vowels sing an accompaniment like Negroes in a minstrel show. My doubts stand in a circle around every word, I see them before I see the word, but what then! I do not see the word at all, I invent it.

For some years now Elise Florenty has been stubbornly exploring the mechanics of language. At the Synagogue de Delme she is presenting a densely woven installation in which the literature and the life of Franz Kafka, the art of recollection and the Cabbalistic tradition echo each other in an imaginative whirling around a central spinning top. The viewer is quick to realise that in more ways than one this latter is the pivot for an ensemble of which Kafka is the tutelary angel.

The opening master-stroke, however, is architectural: the ground floor of the synagogue - a male domain, men alone being allowed to read the sacred Hebrew texts in the Jewish liturgical context - has been closed off and can now be seen only from the balcony, the section for women which is reached by a separate staircase. Thus Elise Florenty has literally reserved this "profane" area for herself, making it virtually the sole circulation space for visitors to Memory Wheels. Just as women, while present at the ceremony, were forced to remain mere viewers, the exhibition viewers will in turn be restricted to the upper level and denied any access to the spiritual. The artist has, moreover, scrupulously emphasised this exclusion by inviting visitors to stroll around outside the building, where a sentence from Kafka's Diary is spelt out along the ground-floor windows.

Haunted in his craft by the limitless fecundity of the Jewish religious heritage, Kafka is quickly on the scene in this exhibition: once on the balcony we only have to look up at the trapeze of Erstes Leid (First Sorrow) (2), hanging beneath the dome in evocation of an early story about a circus performer who "had so arranged his life that he never came down from his trapeze by night or day."  And from there on in, Kafka makes appearance after appearance: from the story Josephine the Singer and the sound track (composed by Marcel Türkowsky) of the same name - musical tops whistling weirdly through four loudspeakers - to the quote from the Diaries ("My doubts stand in a circle around every word"), visible only from the outside on the fence barricading the ground floor entrance. The discreet cornerstone of the exhibition, this fragment is there to remind us that it is always language in its achieving of material form that is the focus of this artist's quest, whether its tangible manifestation be a building (the synagogue) or the singular ordering of ink stains on bound sheets of paper (Kafka's "minor literature" (3) ).

As is often the case with Florenty, it is less a question here of contemplating the various "narrative fragments" she has brought together than of reading them: either learning from the multiple strands she has set up between the objects and their structure and history; or by slipping one's own strands into the narrow interspaces of meaning this artist never fails leave open here and there.

(3) See Gilles Deleuze and Félix Guattari, Kafka: Toward a Minor Literature, tr. Dana Polan, Minneapolis, University of Minnesota Press, 1986.The installation Joséphine (four loudspeakers and sound composition) was realized in collaboration with artist and composer Marcel Türkowsky with whom Elise Florenty has worked for five years.This sound piece will be released on a vinyl LP edition with music on one side and an inscribed drawing on the other side, depicting the pieceOdradekn, displayed in the exhibition. This edition will be co-produced with the Art center of Delme and the residency Künstlerhäuser Worpswede.

Elise Florenty was born in 1978 in Bordeaux, France. She lives and works in Berlin.