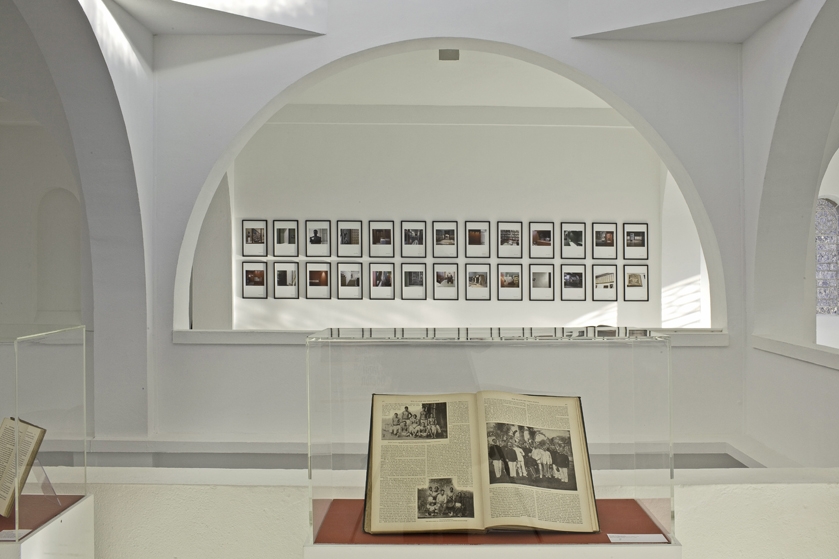 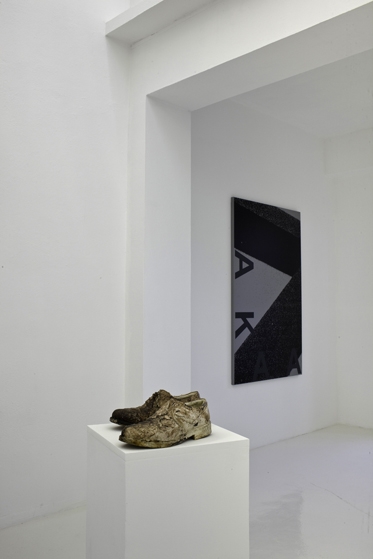 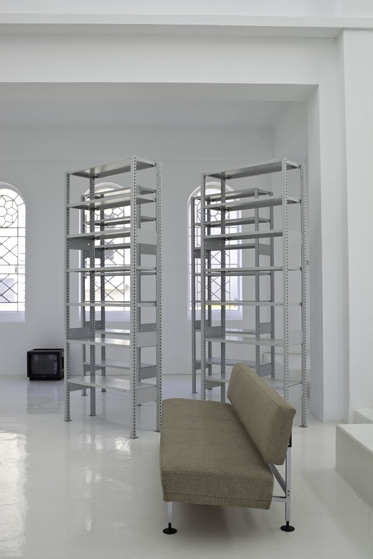 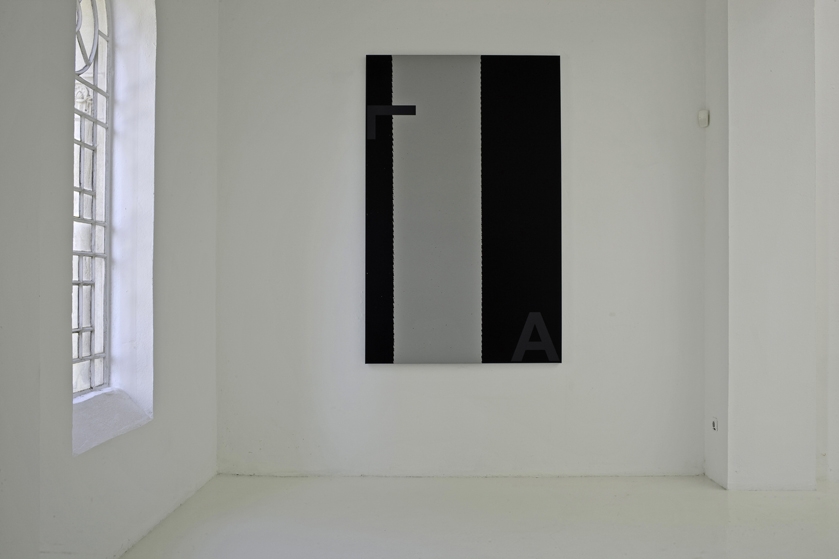 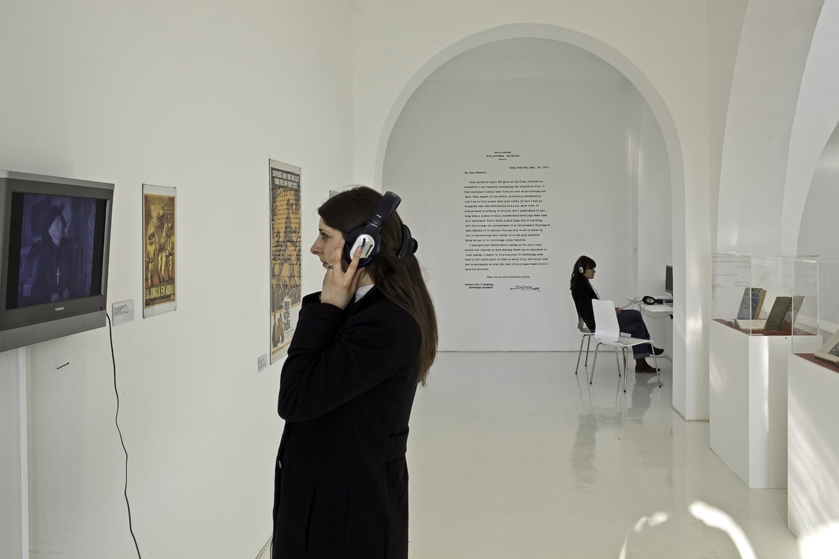 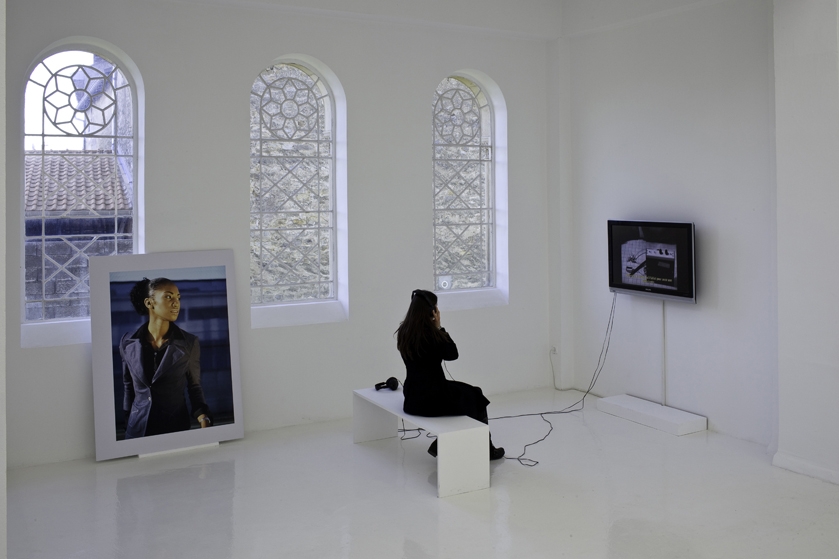 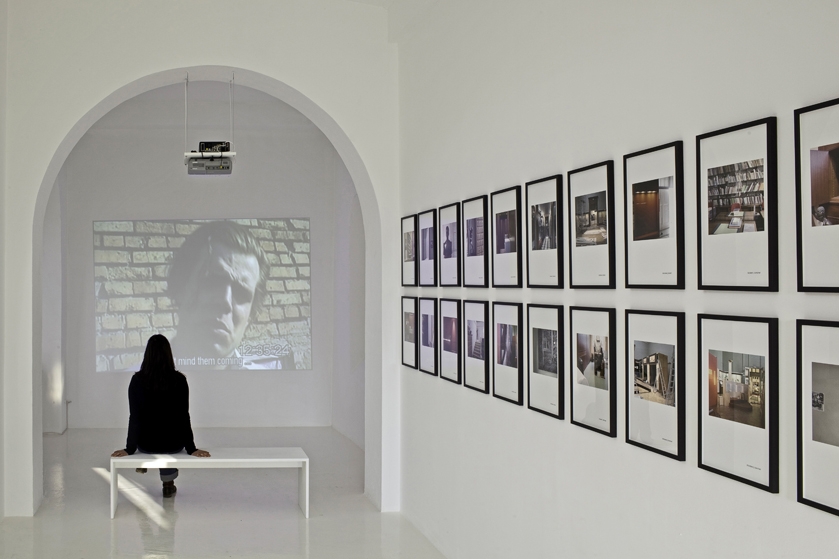 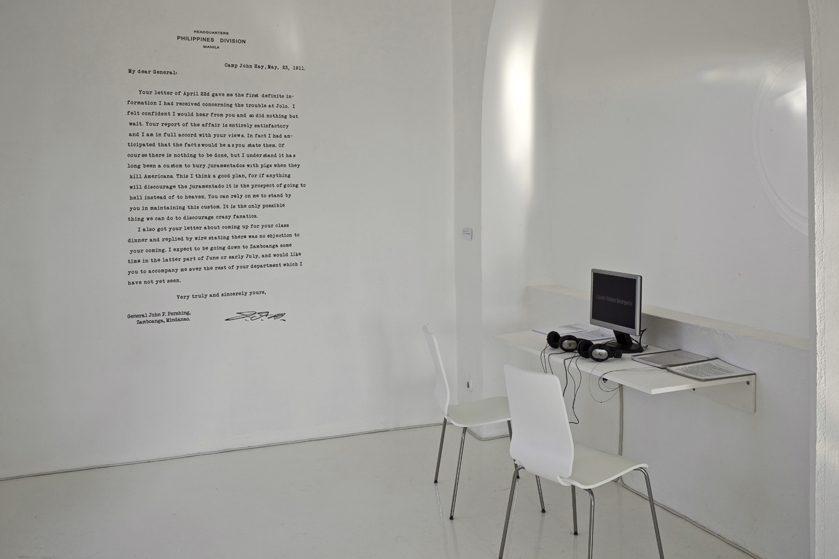 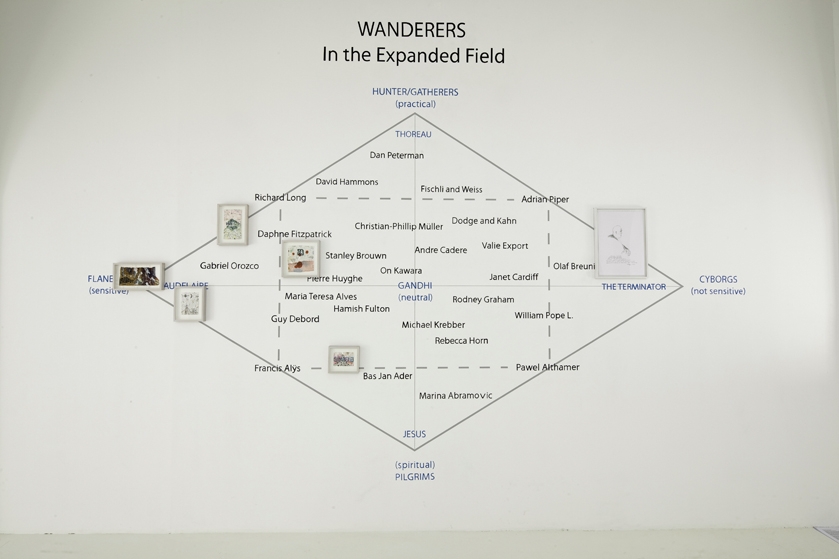 Self as Disappearance is part of an ongoing dialogue generated over the past ten years or so by several major exhibitions, ranging from the second Johannesburg Bienniale in 1997 to Afro Modern: Journey through the Black Atlantic currently at Tate Liverpool. These shows have shed light on the transformations effected on modern ideals and presuppositions once such concepts are rewritten by people who were formerly considered marginal and/or subordinate subjects. The exhibitions have moreover underscored the existence of a hybrid transatlantic culture born of an "intercultural and transnational" condition that Paul Gilroy calls "The Black Atlantic"(1). Along these lines, Self as Disappearance attempts to tease out pictures of a subject "in translation" one having traversed all the historical terrors that constantly drove him or her further from home.

The works on show here by Renzo Martens, Coco Fusco, and Peggy Buth range from private account of the paroxysm of civil and ethnic war, to a localized rewriting of the history of the United States, to a record of museumized documentation of former colonial undertakings. They insinuate themselves into accounts of conflicts past or recent (Chechnya when it comes to Martens, the Philippine struggle for independence in the case of Fusco, and the colonization of the Congo for Buth), the better to dislocate them, to expose them to a new light just when we thought those conflicts had forever consigned to the outer fringes of the media realm. Although war is indeed one of the horizons of this exhibition, it appears less as a subject than as a distant sound, an alarming threat, a "pressure" that may soon force us to create a community "outside all understanding."(2)

When Renzo Martens enters forbidden territories armed with a small camera and fragile questions, he is not seeking "the Other" but rather an image of himself. This issue of self-image and self narrative runs throughout the exhibition. By the yardstick of globalization and of what Edouard Glissant has called the "archipelagization" of the State beyond national borders"(3) what are we to make of an individual"s identity when that identity has been forged from place to place, from migration to migration? What can we make of this individual with his or her fragmented narrative composed of dislocations, of multiple and multifarious "I"? He or she is not without roots, but is always forged in the gap between place of roots and place of arrival or transit. The range of effects produced by displacement - incomprehensible language, phony identity, unfulfilled desires - are as physical as they are semantic, which Adam Pendleton, Joe Scanlan and Haegue Yang allow us to experience by drawing us a little closer to the total stripping of people we might call "naked migrants, that is to say the people forcibly shipped to the continent, constituting the basis of the population of a fundamental circularity that we call the Caribbean."(4) But the Caribbean itself has now been displaced, and our own European, African and Asian shores can also serve as examples.With the works of William Pope L. and Adrian Piper we get closer to the "naked migrant" for they exhibit that very moment when nothing else remains, transforming the tragedy of dispossession into an ultimate strategy of survival.(5)

The artists on show here all share a similar angle of view, a similar take on the beholder. When it is impossible to look something straight in the face - right in the eyes - you have to look aslant, from an angle, from the side, or from below. This is what visitors to Self as Disappearance will more or less be expected to do when confronted with works whose makers are inscribed merely as traces. The beholder will have to concentrate on grasping these works from an angle. This show, which thoroughly rejects the affirmative mode, is constructed like a sphere of negotiation riddled with various desires and identifications, indeed with contradictory yet resolutely open identities.

(1) Paul Gilroy, The Black Atlantic: Modernity and Double Consciousness (London: Verso, 1993), p. 29.
(2) Maurice Blanchot, The Unavowable Community, translated by Pierre Joris (Barrytown, NY: Station Hill Press, 1988).
(3) Édouard Glissant, Introduction à une poétique du divers (Paris: Gallimard, 1996).
(4) Ibid.(5) "Pope. L has given various names to the principles  from which he works, but "lack-worth-having" and "have-not-ness" distill particularly well - the former being a way he describes blackness, and the latter his term for the destitute condition of many of the city-dwelling family members with whom Pope. L maintains close but sporadic  contact from his base in Maine, where he  now teaches - since his actions are really meditations on impermanence, indeed on dispossession, as a kind of general condition." Darby English, How to See a Work of Art in Total Darkness (Cambridge, Mass.: MIT Press, 2007), p. 259.

The title of this exhibition is based on a work by Sturtevant, Copy without Origins: Self as Disappearance

PEGGY BUTH
Peggy Buth was born in Germany in 1971. She lives and works in Berlin, and is represented by Klemm's Gallery in Berlin. www.klemms-berlin.com

COCO FUSCO
Coco Fusco was born in New York in 1960, where she lives and works.www.thing.net/~cocofusco/

RENZO MARTENS
Renzo Martens was born in the Netherlands in 1973. He lives and works in Brussels, Kinshasa, and Amsterdam. He is represented by the Fons Welters Gallery in Amsterdam. www.fonswelters.nl

ADAM PENDLETON
Adam Pendleton was born in Richmond, Virginia, in 1980. He lives and works in New York. He is represented by Haunch of Venison. www.haunchofvenison.com / www.welcometolab.org

ADRIAN PIPER
Adrian Piper was born in the United States in 1948. She lives and works in Berlin, where she heads the Adrian Piper Research Archive. She is represented by the Elizabeth Dee Gallery in New York. www.elizabethdeegallery.com / www.adrianpiper.com

WILLIAM POPE L.
William Pope L. was born in Newark, New Jersey, in 1955. He lives and works in Lewiston, Maine. He is represented by the Mitchell Innes and Nash Gallery in New York, and by the Catherine Bastide Gallery in Brussels. www.miandn.com

JOE SCANLAN
Joe Scanlan was born in the United States in 1961. He lives and works in Berlin and New York. He is represented by the Valentin Gallery in Paris. www.thingsthatfall.com / www.galeriechezvalentin.com

HAEGUE YANG
Haegue Yang was born in  Korea in 1971. She lives and works in Berlin and Seoul. She is represented by the Barbara Wien Gallery in Berlin. www.heikejung.de  / www.barbarawien.de

MATHIEU KLEYEBE ABONNENC
Mathieu K. Abonnenc was born in Paris, French Guiana, in 1977. He lives and works in Paris, France. He is represented by the Hussenot Gallery in Paris and De Expedite Gallery in Amsterdam, both of which hosted solo shows of his work in 2008. His art has been included in various group shows in France, such as the Languedoc-Roussillon contemporary art foundation (FRAC) in Montpellier (2006), La Galerie art center in Noisy le Sec (2007), the Spring in September" exhibition in Toulouse (2007), the external Jeu-de-Paume show in Nogent sur Marne (2008) and the Lorraine FRAC in Metz.The Delme center hosted Abonnenc as artist-in-residence from February to April, 2009.

The invitation to curate this exhibition has thus enabled him to continue the research begun during his residence.Abonnenc is particularly interested in the history of colonization, how identities are made or unmade over time due to conquest, expropriation, and conscious or unconscious traditions. Having himself been born and raised in French Guiana, he is aware that parts of colonial history are being ignored or suppressed by the collective unconscious. His drawings, photographs, and video pieces evoke the gaps left by history: in a series of drawings titled Paysages de Traite (Slave-Trade Landscapes, 2004-2007), he expunged the figures of slaves and colonists from the original engravings that illustrated the mission of the nineteenth-century colonist and explorer, Jules Crevaux.Abonnenc is currently working on a series of interviews with the Guadaloupean director Sarah Maldoror. He is also developing a project on the "Third Cinema" related to the decolonization process in Africa and South American in the late 1960s and 70s.