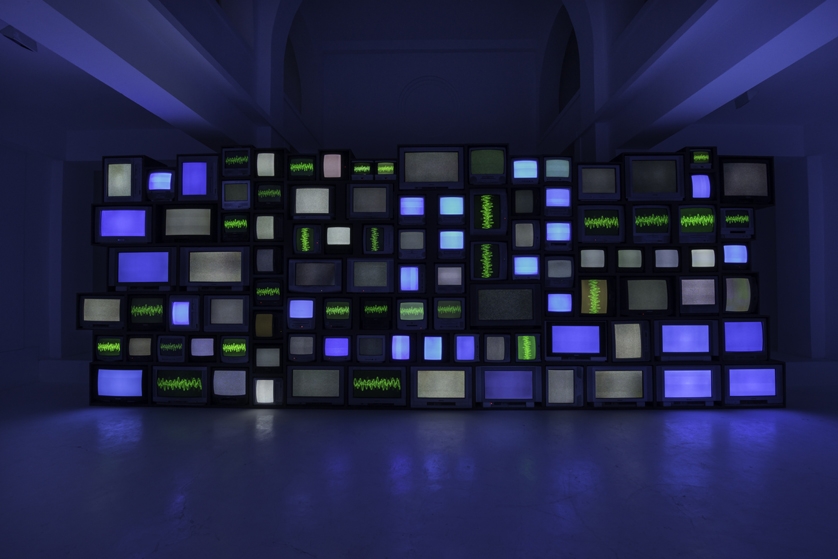 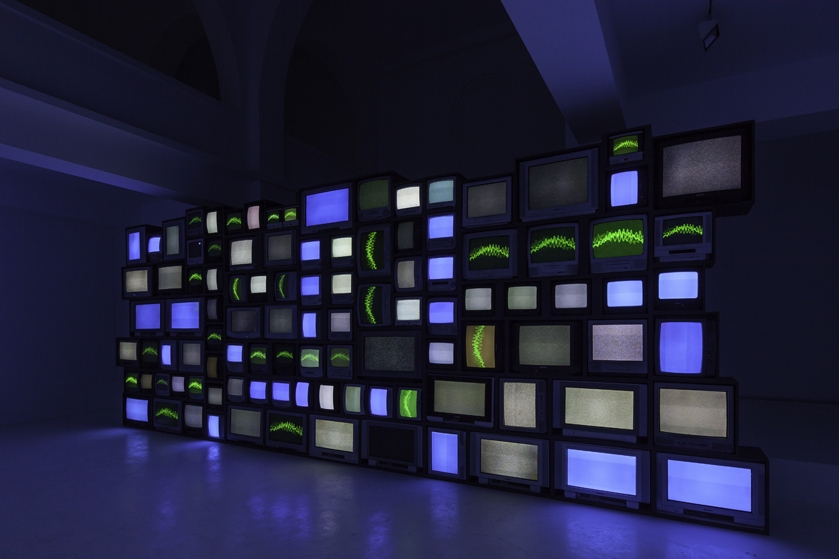 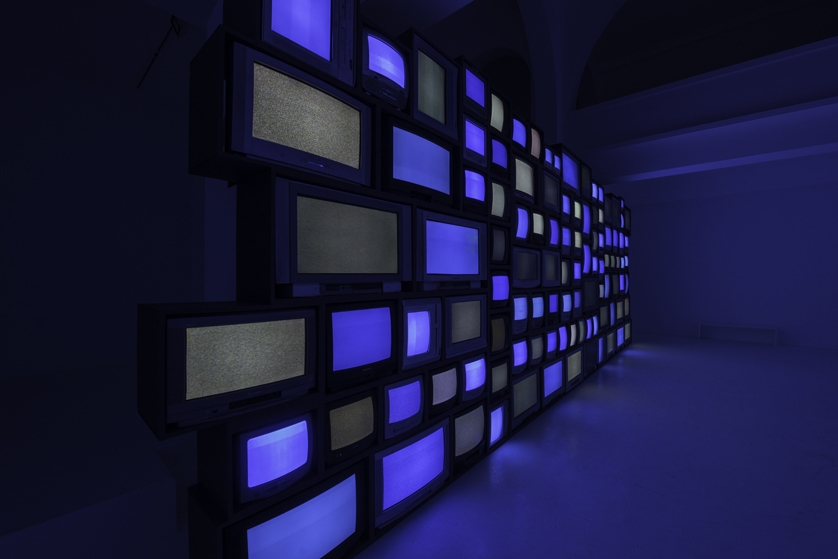 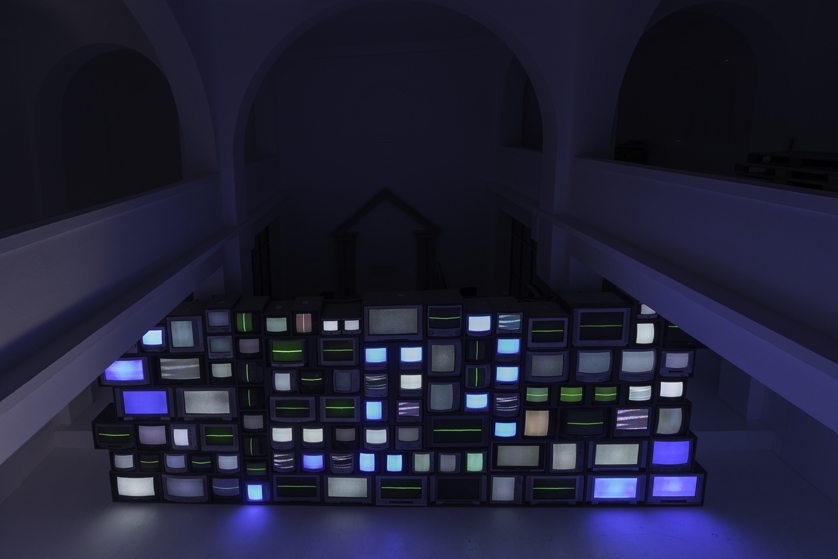 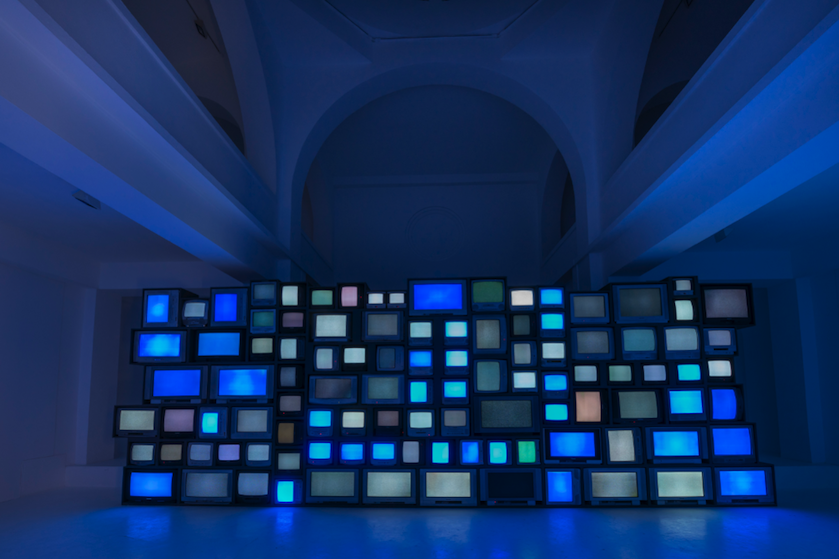 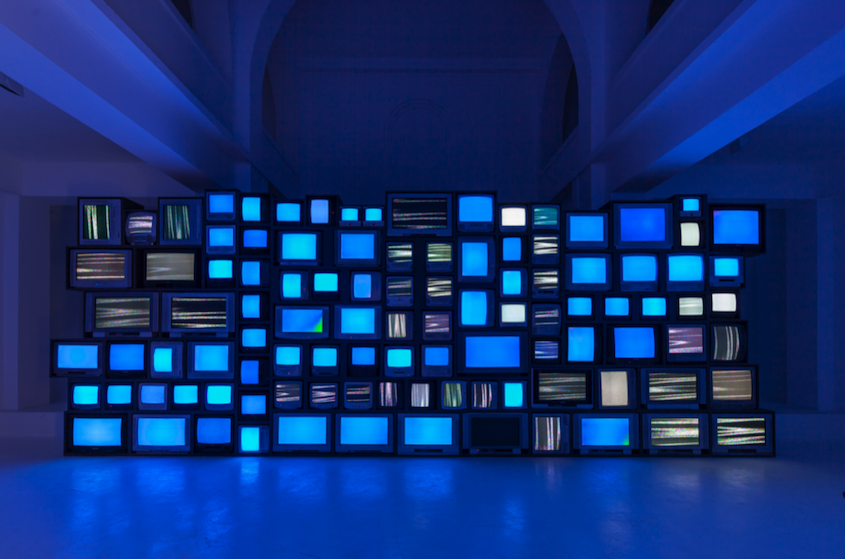 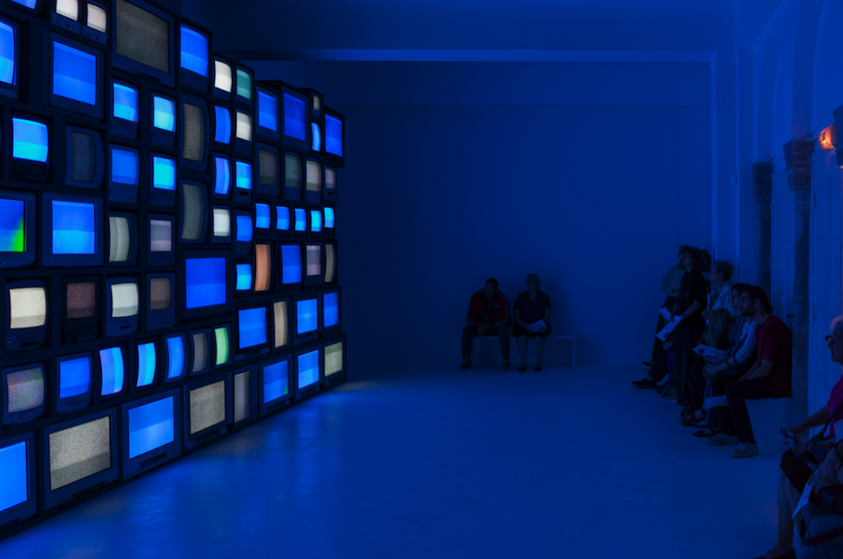 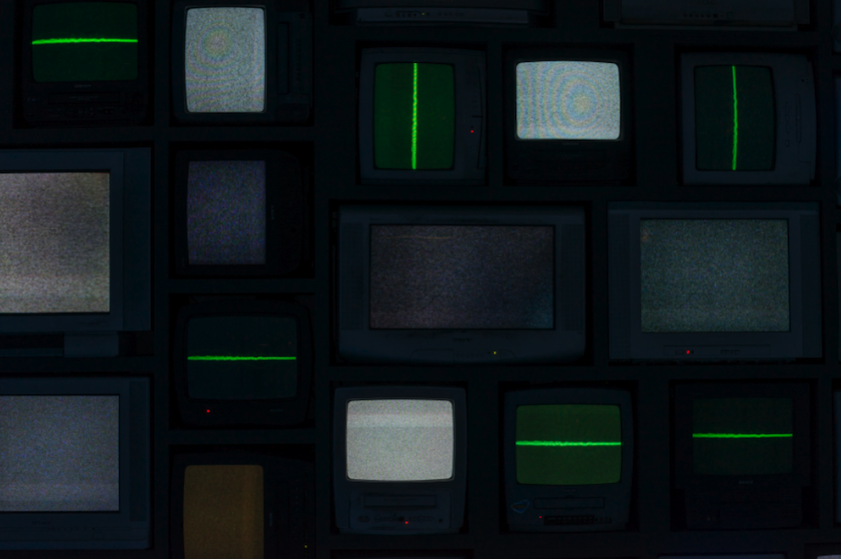 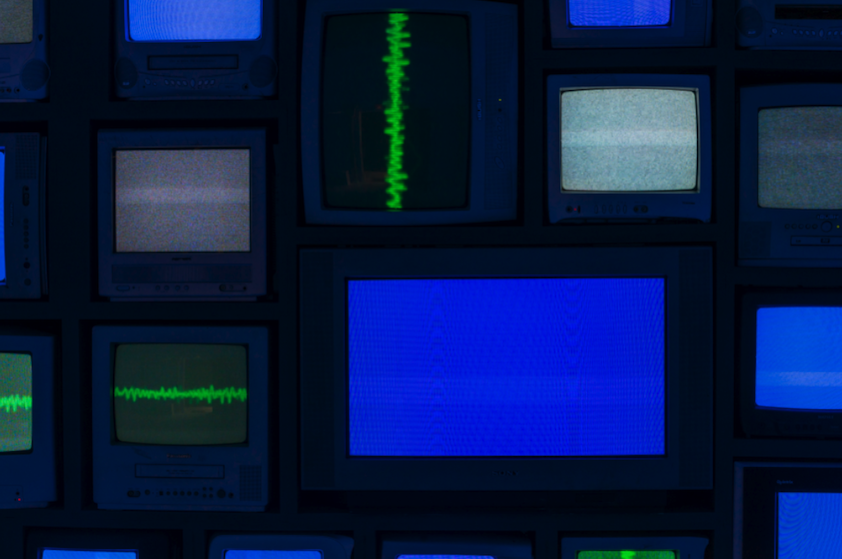 For the entire summer, the Synagogue de Delme Contemporary Art Centre is pleased to present a solo exhibition of work by Susan Hiller. An American artist who has lived in London since 1969, Hiller has been one of the most influential artists on the British scene for forty years. Channels was originally produced by Matt's Gallery in London, and is presented in Delme in a French version recorded for the occasion by the Contemporary Art Centre.

Channels is a vast wall of colour and sound constructed from over one hundred analogue televisions, in which blue and grey screens, disembodied voices and crackling white noise are formed into an orchestrated collage of collected testimony on near death experiences.

The work unfolds and reveals itself gently and by increments: visitors sit and watch the blank screens expectantly as a ballet of subtle colour modulations and shifts occur; then, suddenly, a single voice speaks out, puncturing the white noise with bright clarity. That voice is joined by others, which, rising together form a babble of humanity. The visitor strives to hear individual strands or narratives emanating from the now pulsating screens; the voices ebb and flow, allowing the singular stories of near death, gathered over many years and from all corners of the globe, to address us clearly.

These multiple anonymous descriptions contain recurring motifs delivered in clear unemotional tones: brightening lights, sudden warmth, hovering over ones own body, the loss of feelings of pain or fear, and encounters with either strangers or long-dead family members who explain it's not yet their time to die, just before they regain consciousness.  Hiller is interested in the marginal and unexplained aspects of human life and experience - the things considered trivial or irrational which modernity often seeks to marginalize or ridicule such as unexplained phenomena, faith or even belief. Hiller offers no judgment as to th "truth" behind NDEs but simply presents them as an aspect of human experience, as cultural artefacts, or "social facts".

While the speakers recount their memories without emotion, the cumulative effect of the testimony and also of the powerful silences during the piece, has a profound emotional effect on the viewer/listener.  Hiller has long been fascinated by the inherently uncanny nature of the disembodied voice, explaining 'I'm interested in the unacknowledged, uncanny ghostliness of recorded sound that makes no distinction between the voices of people long dead and those of the living'. In Channels she explores the relationship between technology, the uncanny and the otherworldly to powerful effect.

Susan Hiller's working life has been based mainly in London where her groundbreaking installations, multi-screen videos and audio works have achieved international recognition and are widely acknowledged to have had an important influence on younger British artists. In a distinguished career of more than 40 years, she has drawn upon sources as diverse as dreams, postcards, Punch and Judy shows, archives, horror movies and UFO sightings to make innovative and seductive works from ephemeral, sometimes seemingly unimportant items, works that involve the audience as witness to the lacunae and contradictions in our collective cultural life.

Susan Hiller was born in the United States in 1940. She lives and works in London.

Susan Hiller has curated several exhibitions. One of them, Dream Machines, was presented in several institutions between 2000 and 2004 and gave rise to an eponymous book. She is the co-author of Dreams: Visions of the Night, published in France by Le Seuil( 1976), and the author of The Dream and The Word  (Blackdog, London,2012,)  and The Provisional Texture of Reality: Selected Talks and Texts (JRP Ringier, Basle, 2008).