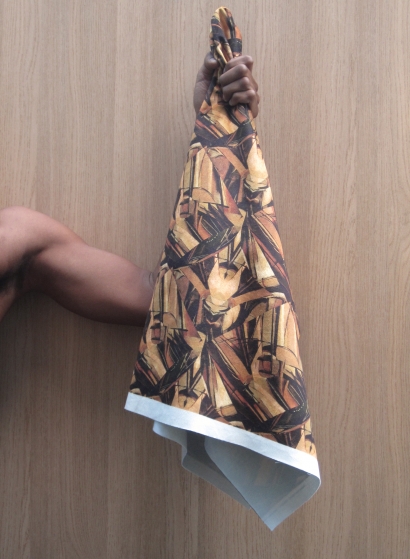 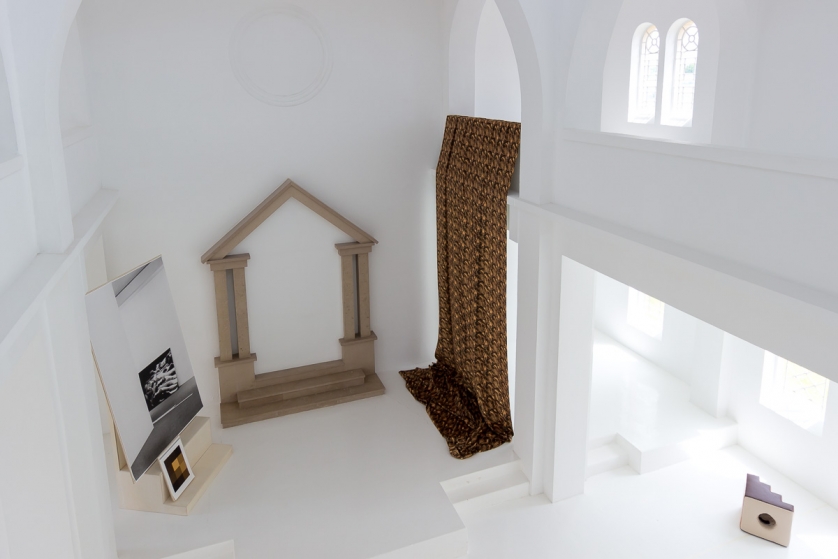 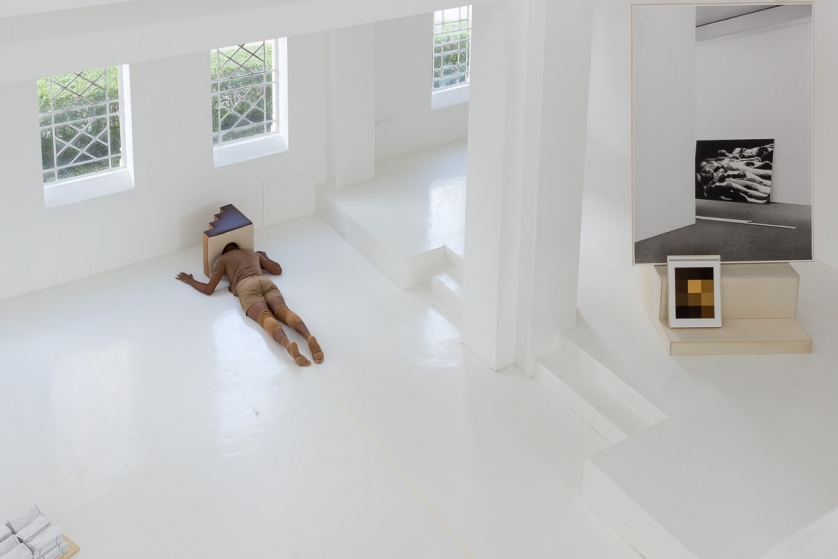 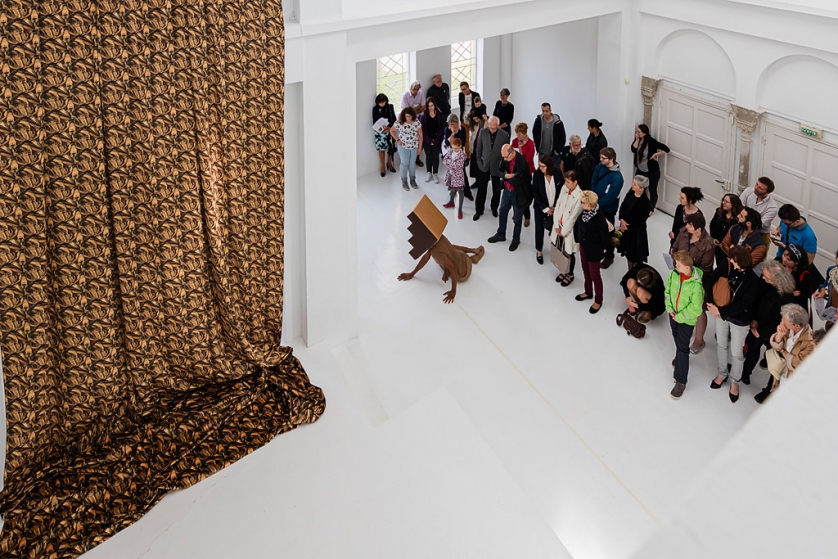 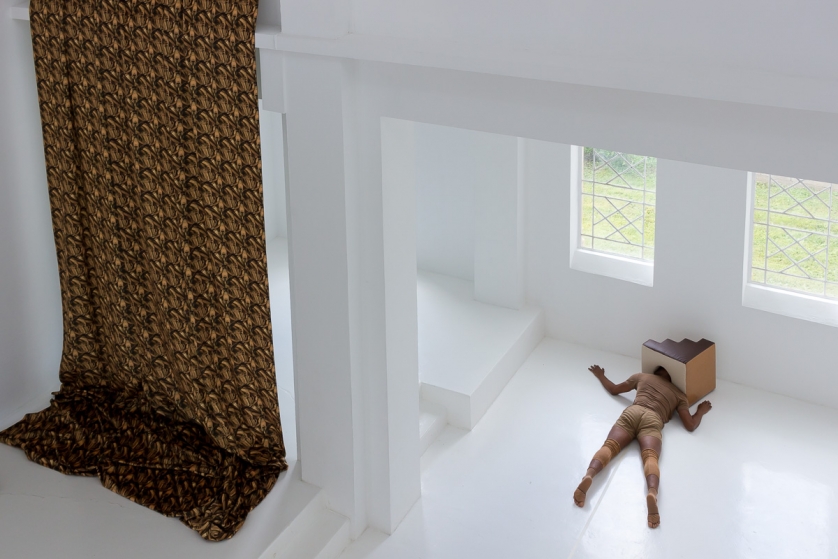 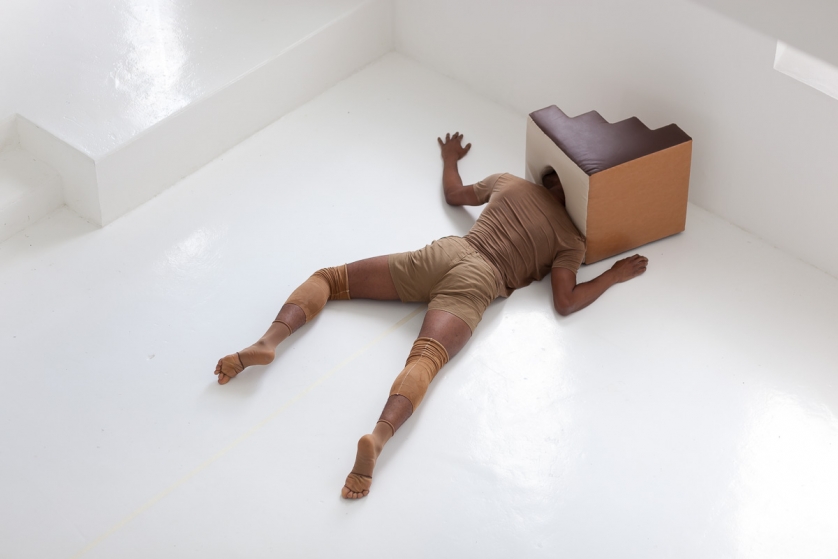 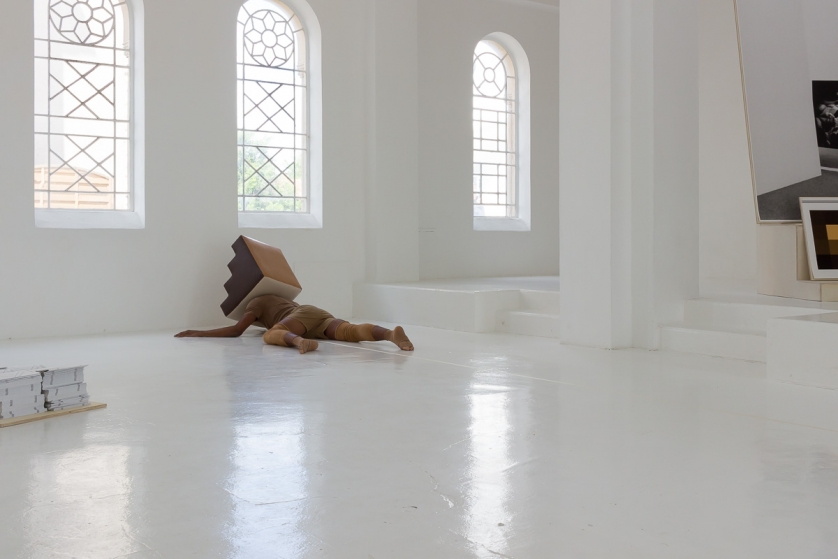 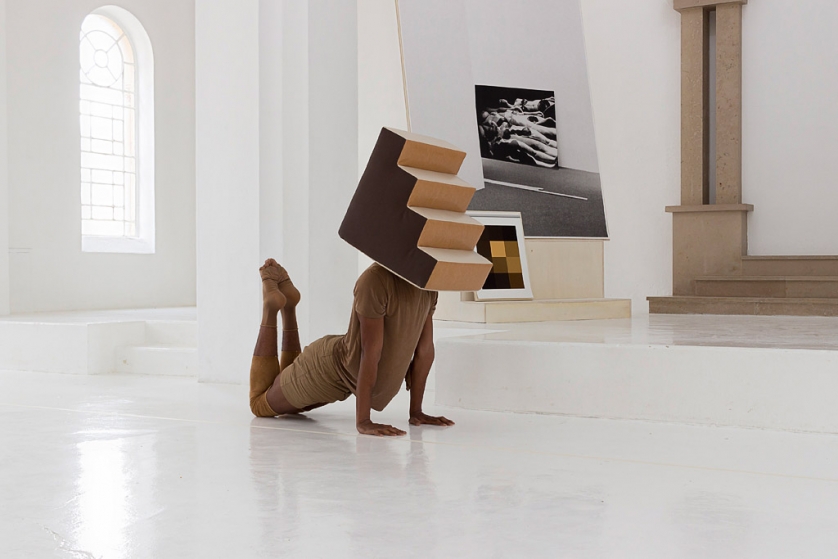 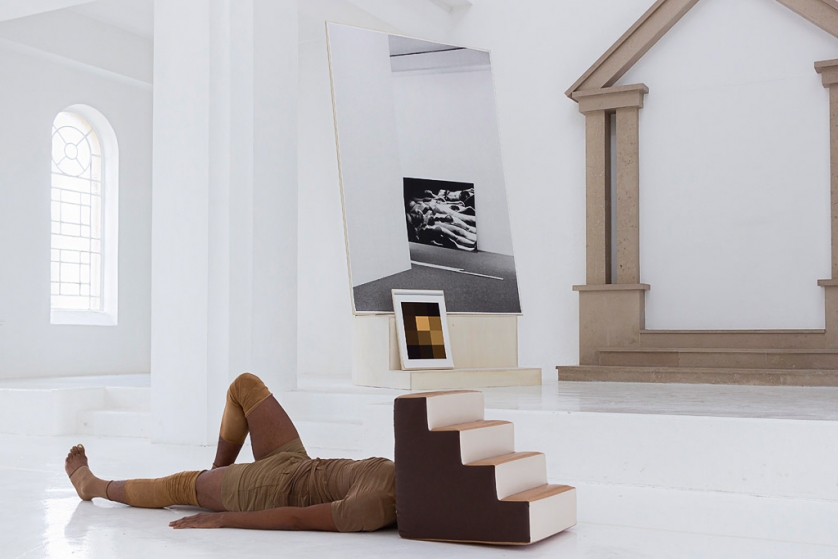 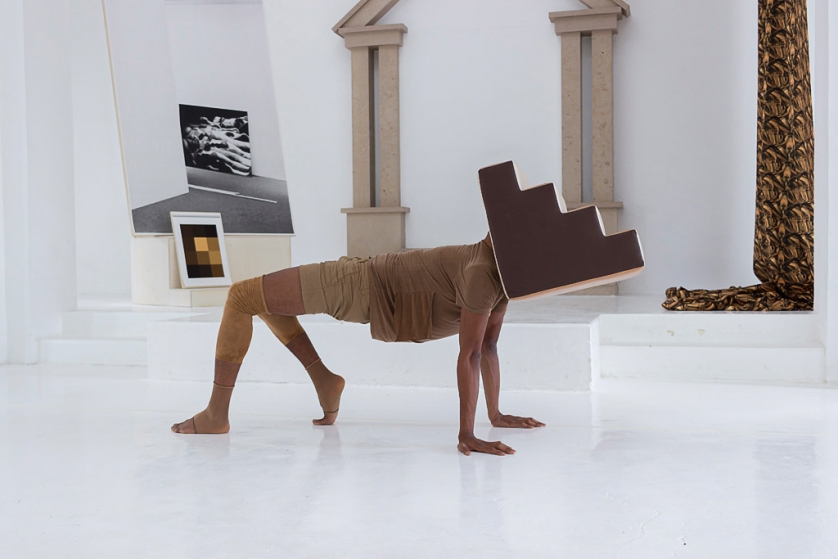 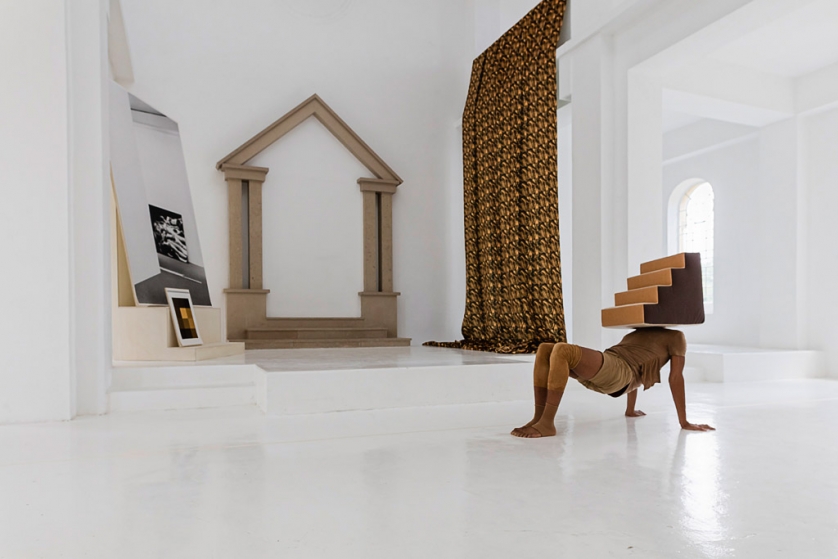 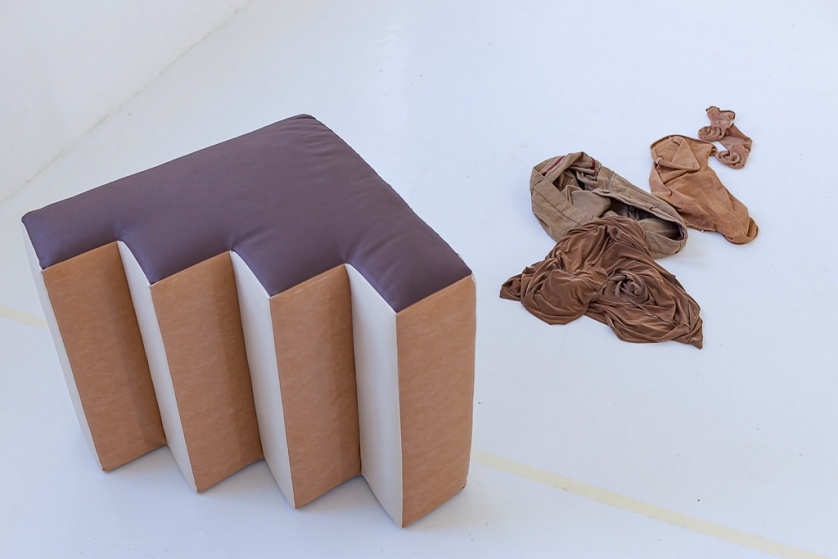 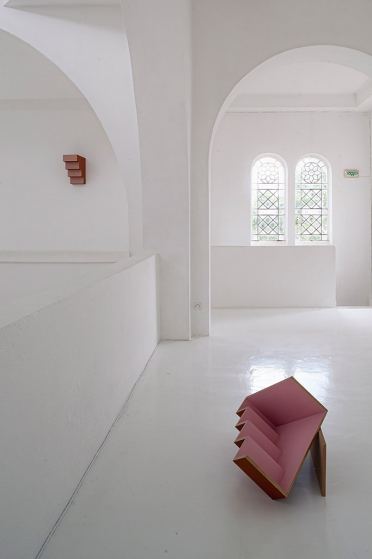 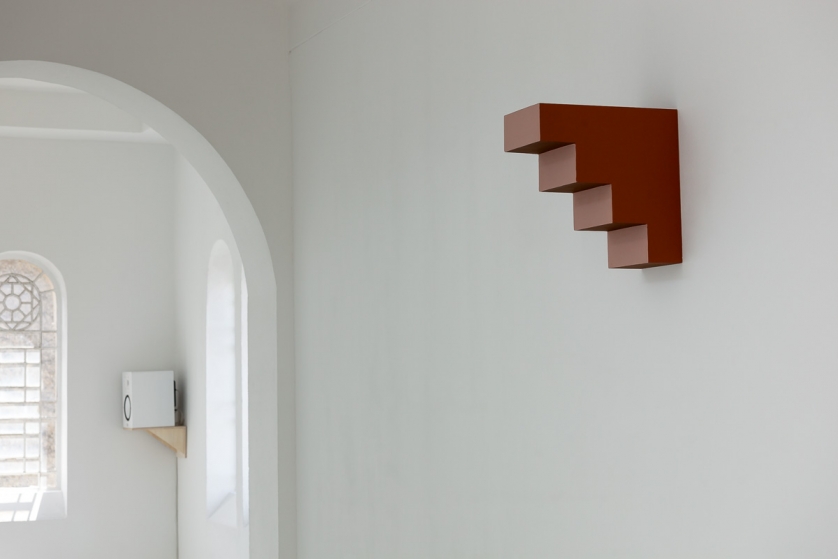 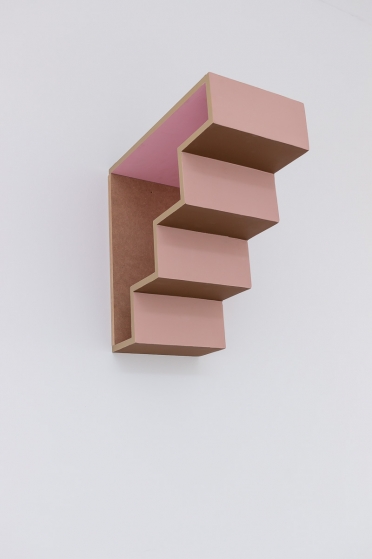 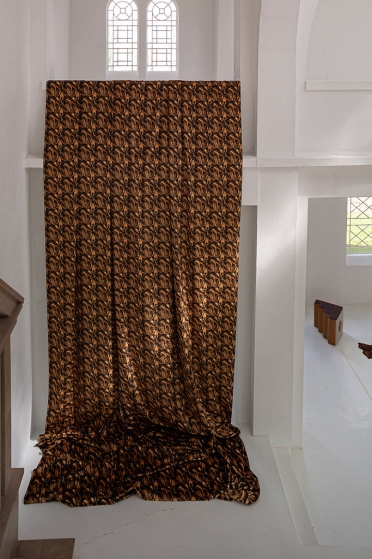 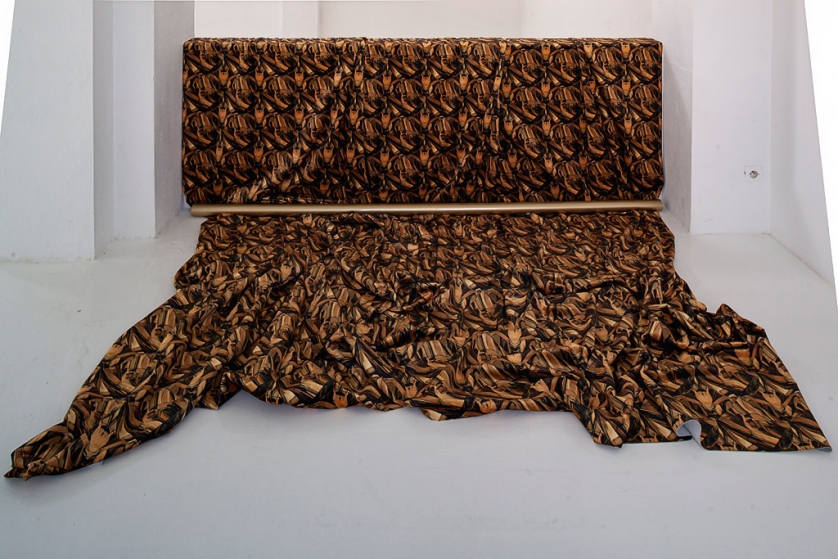 Jimmy Robert’s practice oscillates between various formats: photography, drawing, video, sculpture or performance, all fields he invests with his body and voice. But his work is also crossed by other bodies and voices, those of major 20th-century artists whose gestures, poses, manifestos or images he reproduces. For example, Figure de style (2008) reworks a famous performance by Japanese artist Yoko Ono (Cut Piece, 1965) in which Ono asked the public to cut off pieces of her clothing with scissors, gradually denuding her body. Jimmy Robert reuses the principle of the original performance, its potential erotic tension and its underlying violence, but in his case, visitors are invited to pull pieces of white masking tape off the artist’s black body. To gender power relations, Jimmy Robert adds an additional element of tension, that of the opposition between hegemonic and peripheral figures, in a play of unsatisfied desires and ambiguous gestures.

By deliberately placing himself in the wake of female artists (choreographer Yvonne Rainer, performer Carolee Schneemann, or Marguerite Duras, whose literary and cinematic writing inspired several of his works), Jimmy Robert constructs an artistic genealogy that is no longer written according to the patriarchal model.

At the Synagogue de Delme, Jimmy Robert offers a new visual and theatrical installation in which these questions of genealogy, citation and appropriation remain central.

The title of the exhibition Descendance du nu [Descendance of the Nude] is a direct reference to Duchamp’s famous 1912 painting: Nude Descending a Staircase. Though it caused a scandal in 1912, the painting nevertheless marked a major turning point in the history of art and made Marcel Duchamp into one of the fathers of modern and contemporary art.

To this father figure, Jimmy Robert links mothers, that is to say female artists who in their own way reproduced the motif of the nude descending a staircase: Elaine Sturtevant, Sherrie Levine and Louise Lawler, all three of whom were known for lending their credibility to copies and appropriation, dynamiting questions of authorship and originality, by transforming artistic practice into an infinite recirculation of images.

The installation that Jimmy Robert conceived for Delme is made up of several elements: a curtain falling from the first-floor balcony, printed with repeated patterns, literally pulverises Marcel Duchamp’s painting while turning the exhibition site into a theatre set, a space where images are activated, where one can perform the history of art, in order to bring out new base lines and show what was previously outside the frame.

Opposite this immense curtain, images placed on a staircase combine various references to, and appropriations of, the nude descending the staircase, as reinterpreted by several women artists in the 20th century. The text commissioned from theorist and art critic Elisabeth Lebovici, published by the art centre for the occasion, sheds its own fascinating light on Jimmy Robert’s work.

Furthermore, a sound piece conceived by sound artist Ain Bailey allows us to hear a succession of female voices. Although they emanate from the passageway upstairs (a space once reserved for women in the old synagogue), the voices escape this dedicated place in order to circulate through the whole building and occupy it fully.

On the evening of the opening, Jimmy Robert is giving a performance, presenting himself at floor-level. This crawling body, on the ground, vulnerable and having descended the staircase for good, provokes confused feelings; at any moment, laughter is liable to become the hidden side of desire.