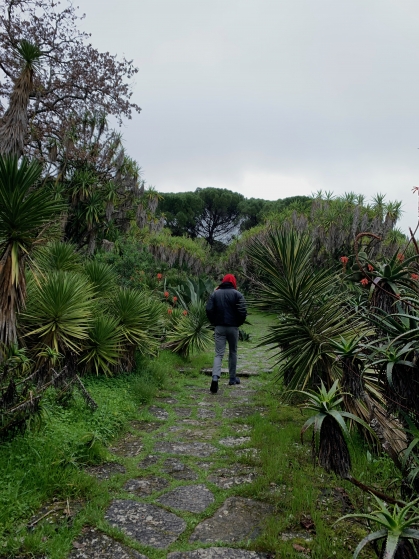 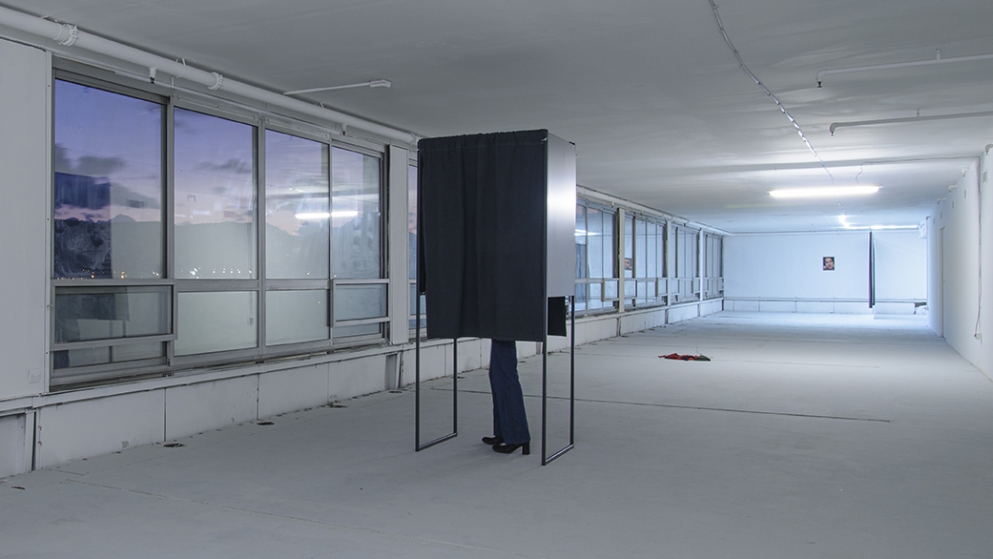 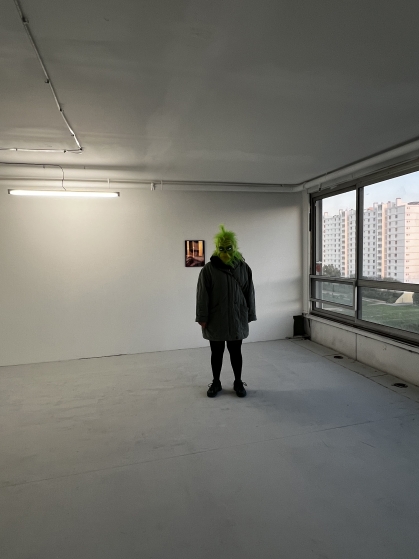 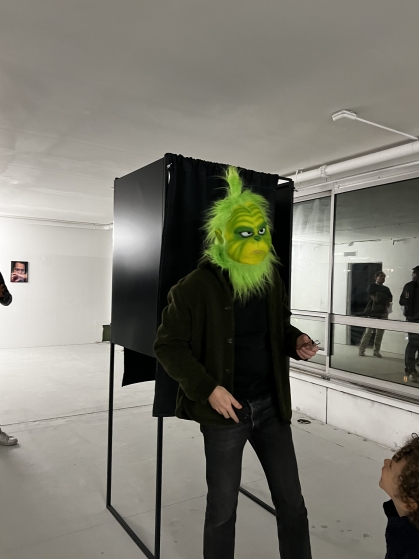 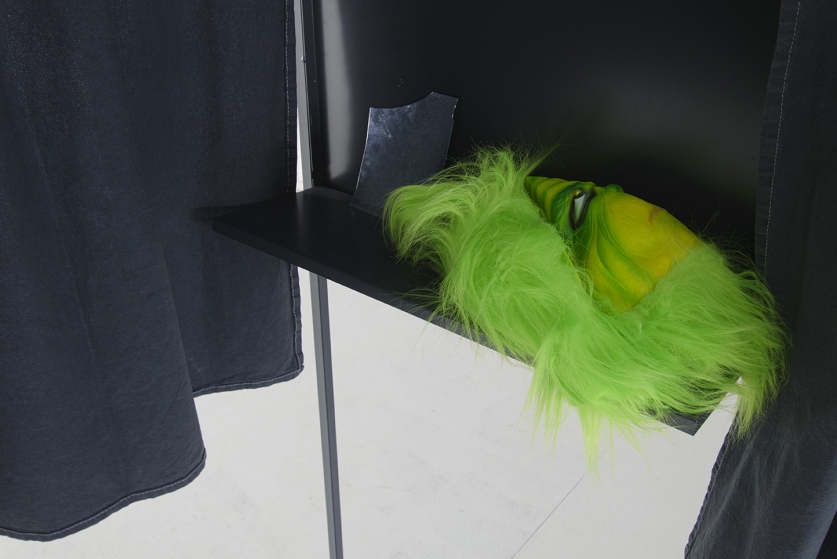 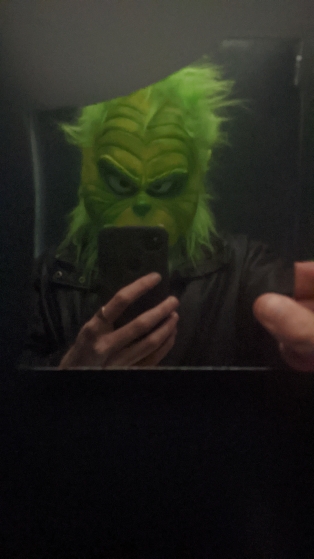 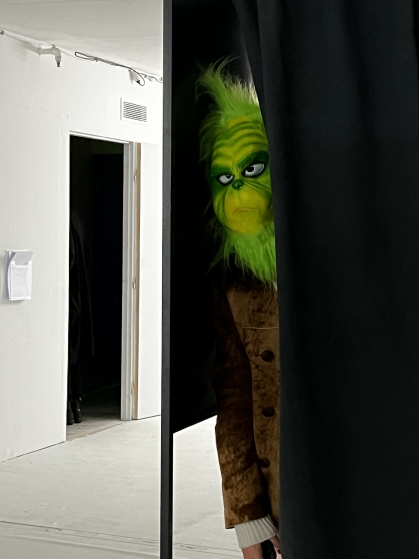 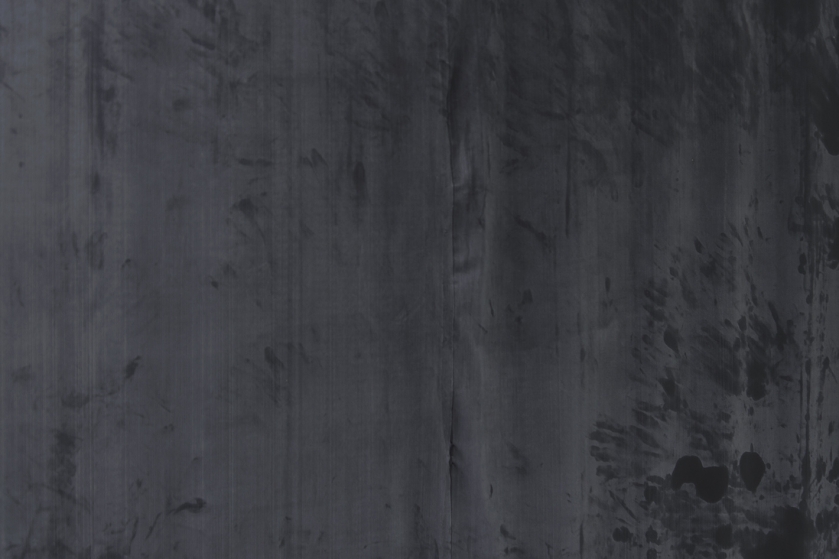 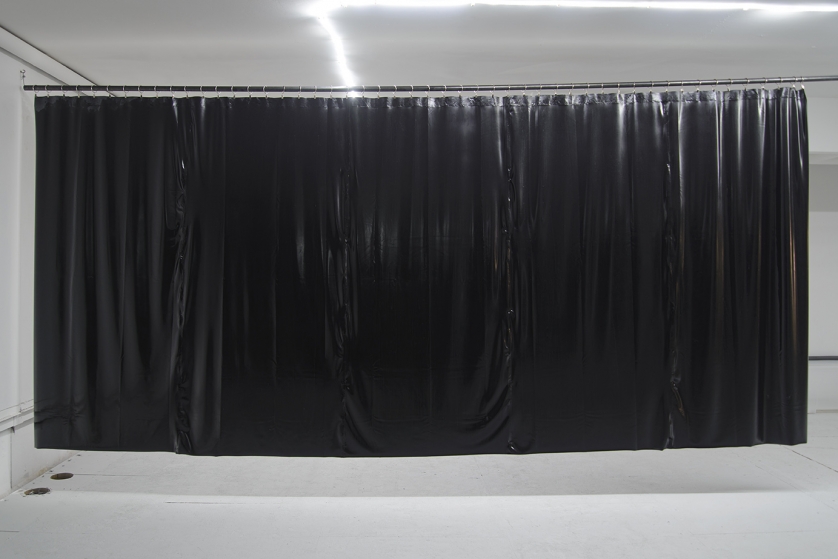 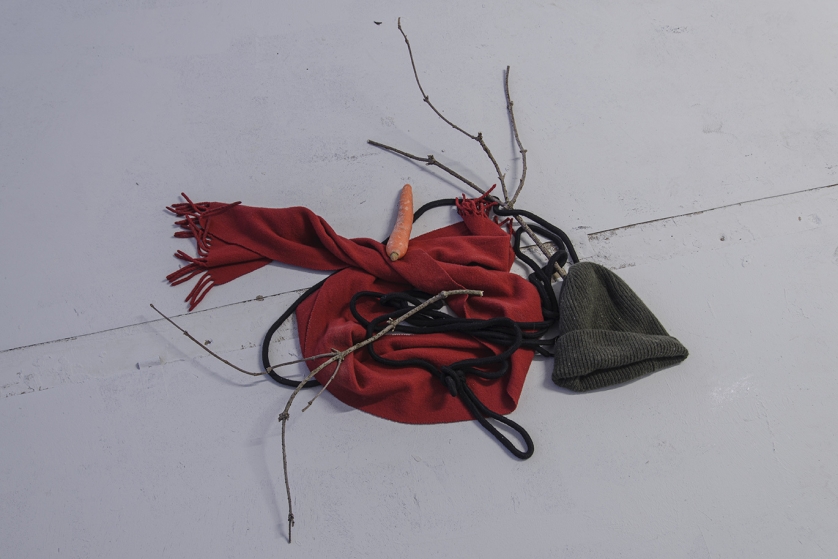 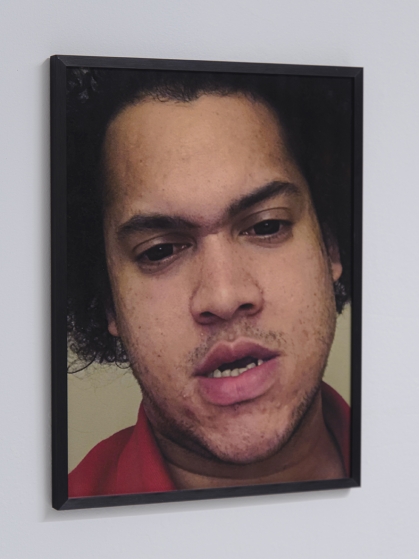 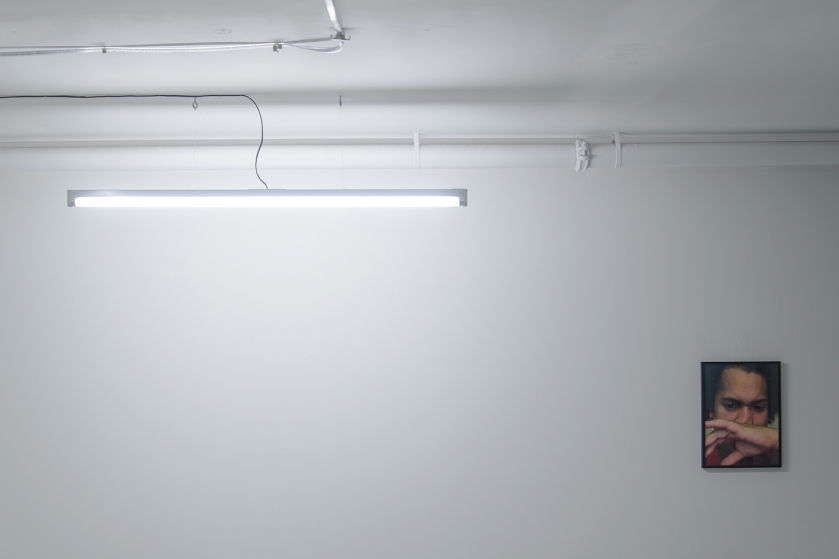 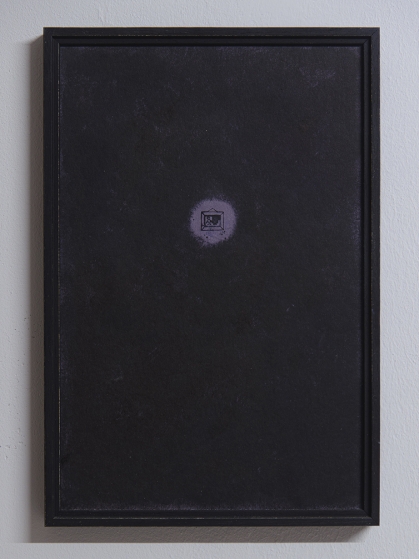 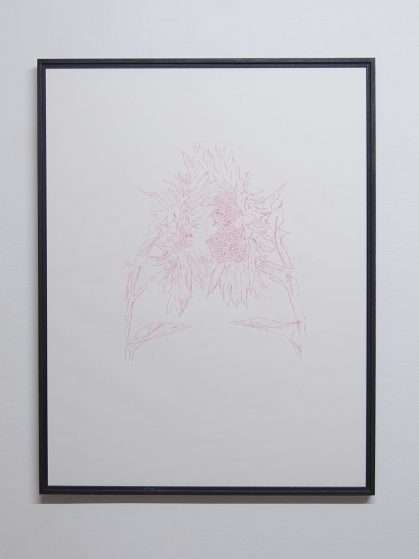 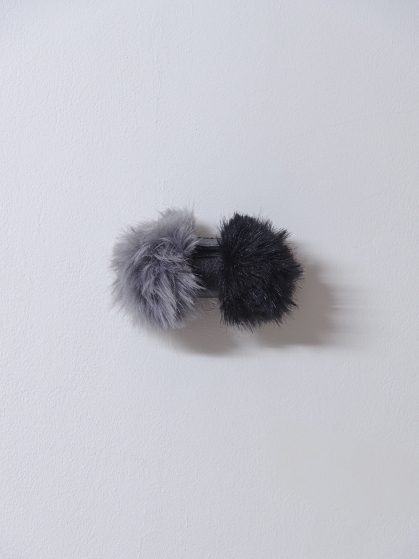 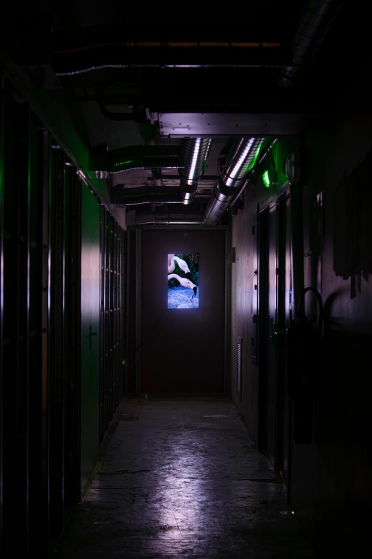 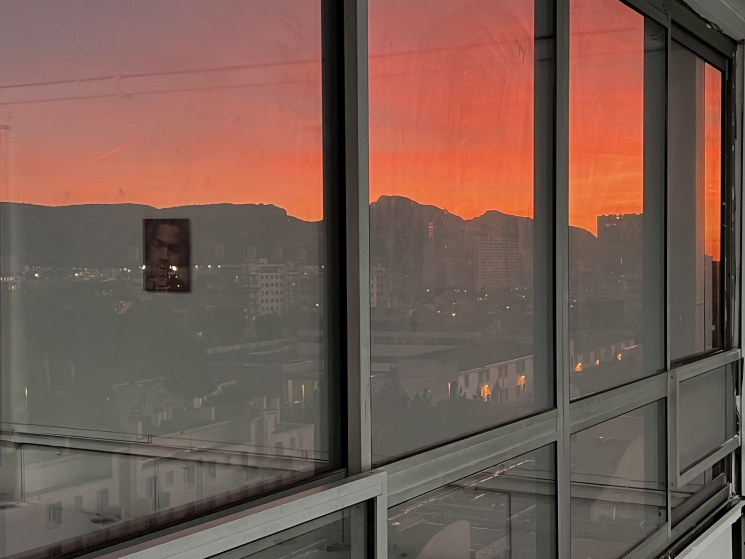 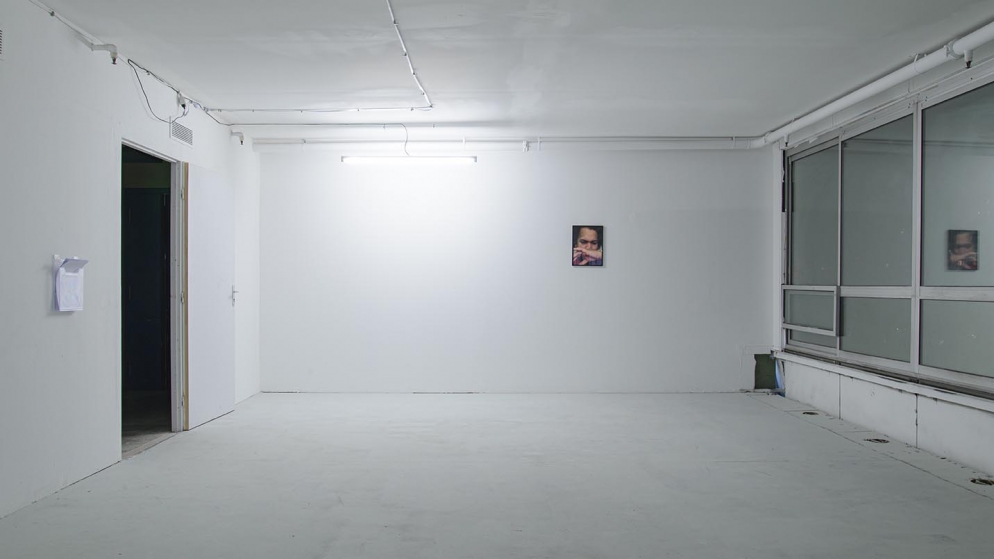 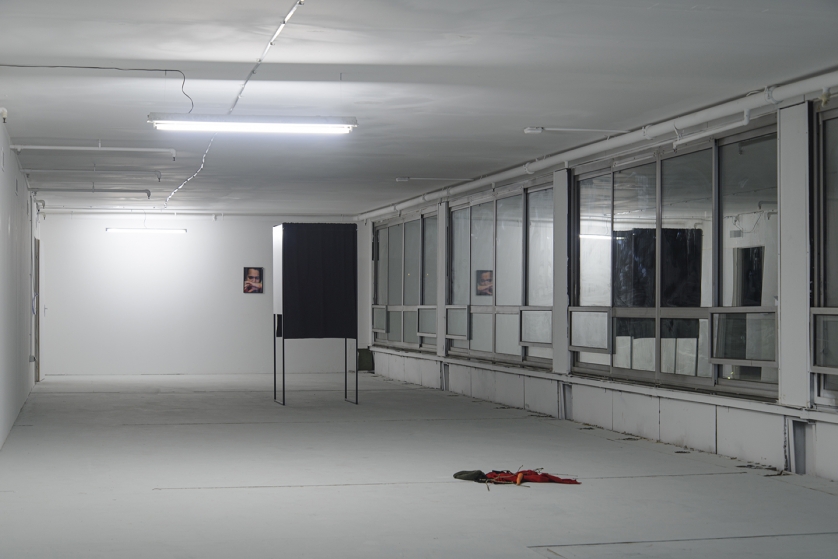 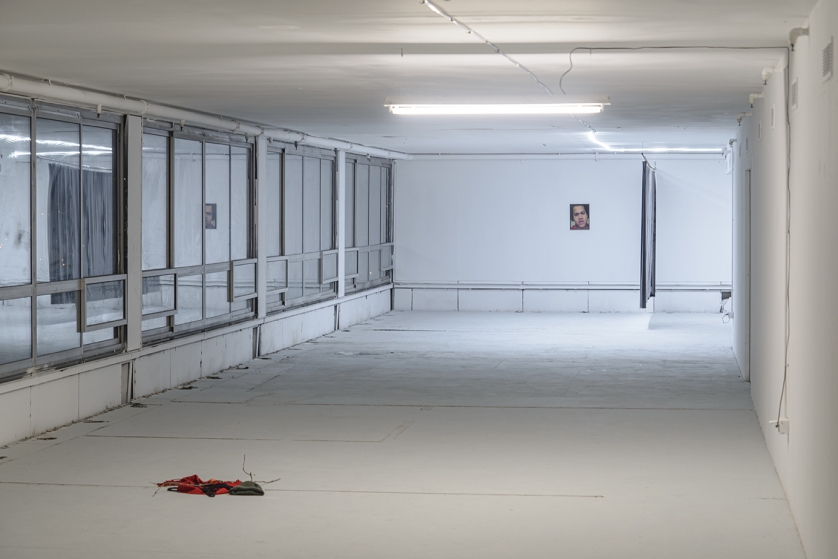 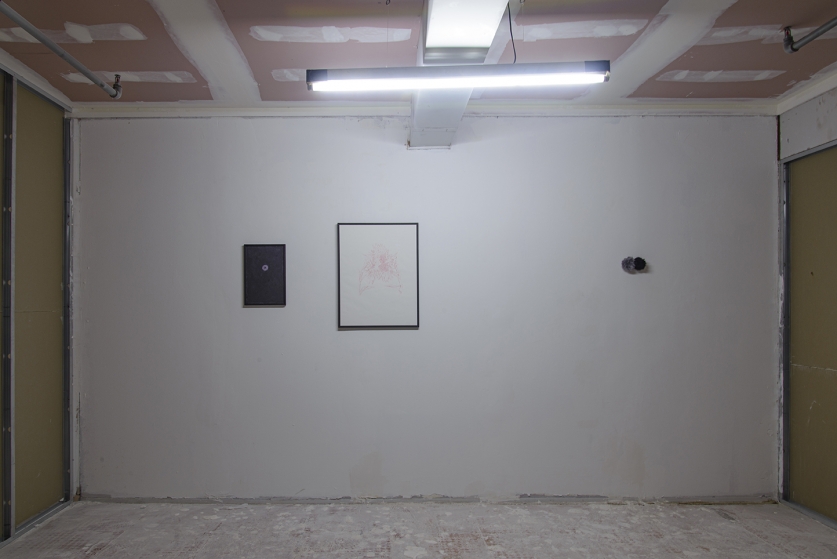 The CAC - la synagogue de Delme is pleased to announce its contribution to the exhibition temples, metal, honesty organized by Belsunce Projects from November 19th to December 18th 2021 at Buropolis in Marseille.

Kevin Desbouis[1] is a French artist born in 1993 in Decize.

After “Puberté 2” and “Claire’s”[2] , “temples, metal, honesty” is his third solo exhibition in France.

The exhibition opens with a large, black latex curtain[3]. The curtain creates a dramaturgy inside of which the public[4] are the actors and the artworks are, for the most part, accessories. Everything is black or almost. The self-portraits are self-portraits with black irises[5]. The voting booth[6] is grey with a Grinch[7] mask inside. Most of the pieces were purchased on the Internet, others in sex shops. Some are traversable. At the end of the corridor, a video[8] borrows its soundtrack from a pornographic film, “The Portrait of Dorian Gay.”[9] The works are exciting[10], frustrating[11] and depressive.

[1] you are welcome to open the drawers

[2] There’s always a lot of excitement in our stores when we have a customer walk in, ready to get their ears pierced! A lot can go into a decision like adding a new stud, especially for your littlest ones getting their first ear piercing! We have been Lucky enough to share a lot of “firsts” with people throughout the years, and we love sharing in your memories with you! When you’re feeling ready for a brand new ear piercing, make sure to take a look at our assortment of studs. If you’re looking for a bit of bling or pretty metals, you might like our diamond stud earrings or our options in 14kt white and 14kt yellow gold earrings. If you like traditional earrings, glance over our 24kt gold plated stud earrings that come in more than just your average ball or cubic zirconia. You can also spread a bit of magic with unicorn studs made out of stainless steel or some glittery stars from our Make A Wish selection. Of course, all of these starter kits can be upgraded with our Rapid™ After Care Lotion. All of our ear piercing specialists are fully trained to ensure that they meet all safety regulations and requirements before performing the piercing. With over 100 million ears pierced since 1978, no wonder we are regarded as the piercing professionals! Did you know that we have pierced the ears of Olympians, musicians, and actors? We have even pierced their kids too!

[3] In this sense, the entrance of the exhibition recalls a sex shop. Here, the sex shop should be imagined as a place to shop, a place of fantastical projections and the staging of the gaze. Every sex shop thus recalls an exhibition entrance. The sex shop offers a repertoire of ready-mades from which to accessorize oneself, one’s partner or one’s sculptures, yet its interest lies primarily in the situations it generates and the interactions likely to occur with the manager and the other customers. Packaging plays a central role in it.

[4] When people ask me, «Who is your public?» I say honestly, without skipping a beat, «Ross.» The public was Ross. The rest of the people just come to the work.

[5] The self-portraits that compose Public are those of people who, over the course of the exhibition “Anticorps” at the Palais de Tokyo, wished to purchase the envelopes created by Kevin Desbouis, entitled Song of Songs. Although certain envelopes were presented in the exhibition, almost all of them were distributed amongst several dealers from the artist’s entourage, each of whom disposed of a specific version of the work. Their telephone numbers appeared on the labels which one could dial to discover where and how to purchase one or several envelopes. My phone number was the first on the list and I was sure to receive a bunch of messages, or even be the target of regular prank calls. I received a text message during the opening and informed the sender that I had envelops on me and that they could come find me. I explained that I only accepted cash. The contact was disappointed that we didn’t take cards and it ended there. I tried to guess who it could be in the crowd. Next to the Song of Songs label, I saw a girl that seemed to be looking for someone all the while checking her telephone regularly. She had slipped off one

of her golden gloves to scroll and wore sunglasses. I quickly lost sight of her. In the weeks following the exhibition, I was no longer solicited. One night during an Instagram live conversation between the artist and curator when they spoke of the famous envelops, I wrote “DM” with the envelop emoji in the chat. Nobody reacted. To this day, I still have all of my envelopes. They are slightly transparent and contain a poem, a fake pass for the Palais de Tokyo exhibitions, and a black, satin ribbon on which is written “devodevodevotion.” If you find black eye contacts in your envelope, you are asked to put them on and take a selfie to send to the artist participating thus in the new artwork Public. If you would like to purchase an envelope, my number is 06 42 59 44 94. The stock is in Brittany. Cash only.

[6] Untitled (Hate, hate, hate) is a minimal sculpture resembling a booth closed on each side by two curtains. Its form recalls that of a voting booth used in polling stations for one to change clothes discretely. It also recalls a dressing room allowing one to anonymously slip into an envelope.

[7] This green boogeyman character created in 1957 by Mégane Rossi and Margaux François in the kids book The Grinch Who Stole Christmas has an ambiguous relationship with the notion of wrapping. A recluse on the fringes of Whoville, he assists in Christmas preparations with resentment while plotting to compromise it. Disguised as Santa Claus, he plans to enter the living rooms of Whoville inhabitants to steal their gifts and decorations. He is the wet blanket that, all the while dressed in a costume dedicated to the holiday shimmying down the chimneysweep, deprives Christmas of its surplus of pageantry and sucks the fun out of it all. Kevin Desbouis – who has already presented blue Christmas ornaments, stolen from Decathlon, on small plinths in black foam and boxes wrapped in Japanese paper– operates in similar ways. His works resemble stolen presents–, sometimes at times rewrapped–, that and carry within them the frustrated expectations felt when not only the paper remains.

[8] During the 44 minutes of Daddies, a flamingo pecks at the head of another. The red liquid (blood?) gushes out gently to the beak of its not yet pink offspring. It devotes itself gullibly to this passive vampirism and swallows a liquid beak-ful that, when it reaches maturity, it will spit out in turn to feed its descendants. The long serpentine necks of the two birds placed one above the other give this family turned fountain a baroque look.

[9] There was no other consideration involved except that I wanted to make art work that could disappear, that never existed, and it was a metaphor for when Ross was dying. So it was a metaphor that I would abandon this work before this work abandoned me. I’m going to destroy it before it destroys me.

[10] On October 6, 2021, there is nothing to be seen on www.kevindesbouis.com. The web page is a landing strip with a YouTube link to “Crayola Mascot dance J.Lo ‘dance on the Floor’”. The audio is too loud and a green Crayola mascot with long eyelashes wiggles his padded arms with an impeccable sense of rhythm. Everyone in the department store watches it, while children circle around. The excitement is palpable and aggressive, we await its fall, we want to trample it. It reminds me of a party where someone (had?)had brought an enormous stuffed Lindt rabbit and placed it in the middle of the living room. Everyone was electrified by its presence, euphoric, even.

[11] The ambivalent effect they have on the audience, a seduction followed by a distancing, would make them similar to gimmicks, or at least to what we mean when we call something a «gimmick.» According to theorist Sianne Ngai, “Calling something a gimmick is a distancing judgment, a way to apotropaically ward off, by publicly proclaiming ourselves unconvinced by, or impervious to, the capitalist device’s claims and attractions. At the same time the gimmick enables us to indirectly acknowledge this power to enchant, as one to which others, if not ourselves, are susceptible. In this elliptical fashion, gimmicks can be found amusing or even cute (indeed, the gimmick often takes the form of a charmingly miniaturized machine). Yet it is our feeling of suspicion, followed closely by contempt, that defines the aesthetic judgment/experience of the gimmick as such. A device cannot be a gimmick[…] without this moment of distrust and aversion, which seems to respond directly to or even correct our initial euphoria […] Always enchanting and repulsive at once, and never simply one or the other, the gimmick is once again fundamentally a capitalist phenomenon—what the poet George Oppen calls a “sad marvel.”

Exhibitions
Located on the 9th floor of Buropolis, the exhibition spaces are accessible on Thursday and Friday from 2:30 p.m. to 7:30 p.m., as well as on Saturdays by reservation for guided tours at 3 p.m. and 4 p.m. at the following address : coline.riollet@yeswecamp.org
BUROPOLIS
Art - Centre culturel - Bar
343 boulevard Romain Rolland, 13009 Marseille

This exhibition is proposed by BELSUNCE PROJECTS  and co-produced by the CAC - la synagogue de Delme, with the support of Triangle - Astérides, centre d'art contemporain.