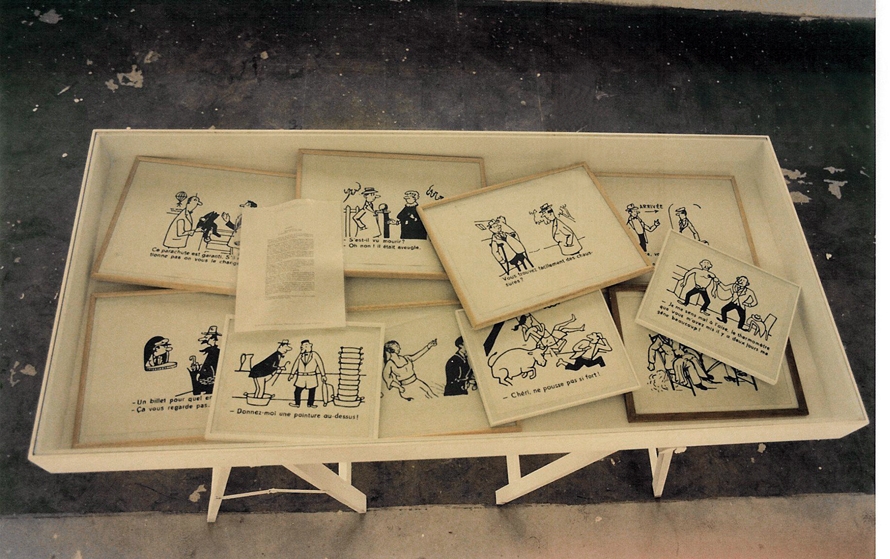 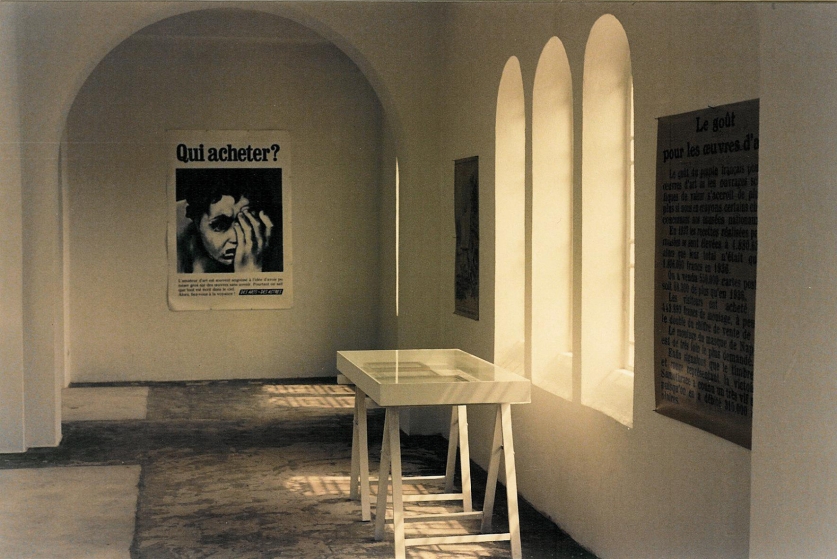 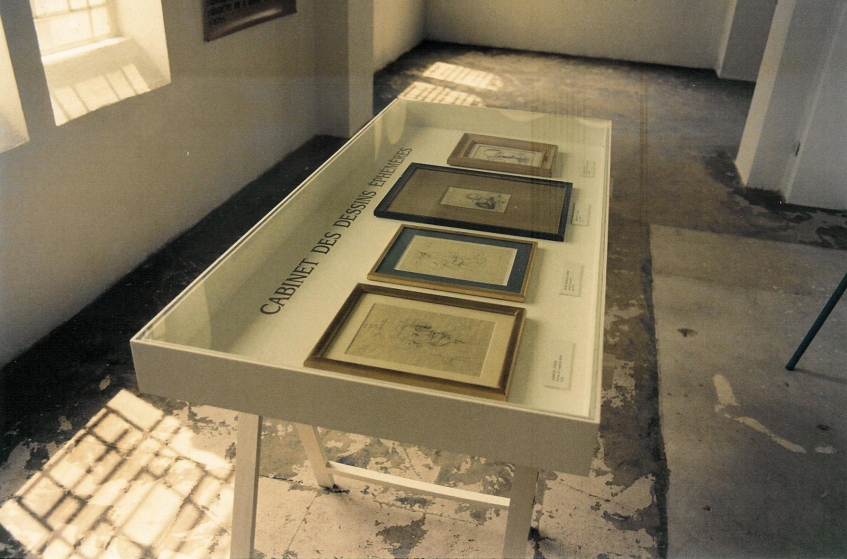 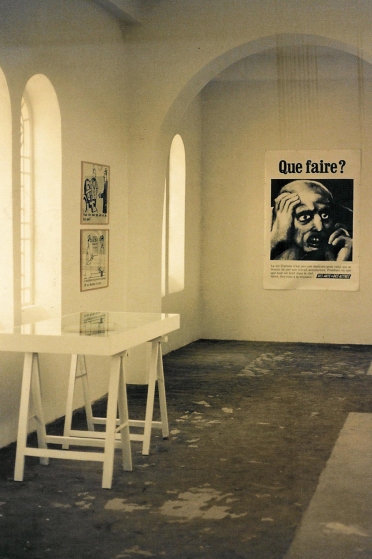 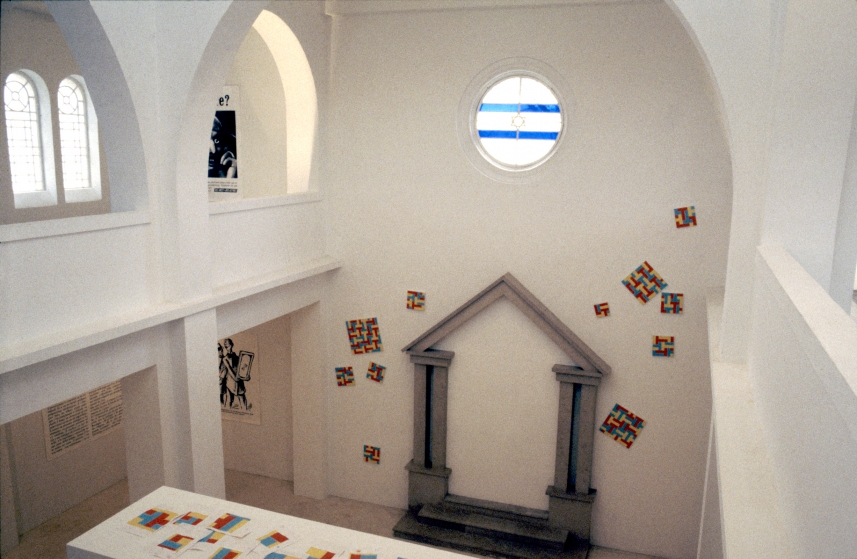 Through the taste he shows for goofy humour or biting irony and a critique of standard bourgeois values, Ernest T. looks like an heir of Alphonse Allais[1] and his early attacks on the partly consensual reception of the avant-gardes at the turn of the last century by a bourgeoisie always looking for ways of speculating on and enhancing its image, and with the traumatic memory of the critics and the Impressionists failing to hit it off. The critique of how the art system operates is a major feature of Ernest T.’s work. His drawings, inserts, aphorisms – on printed or photographic media, and his paintings doggedly track down opportunistic judgements of taste and the underlying academicism, while making a radical critique of the standards and values that are the bedrock of the art system. The work of Ernest T. may be seen as an endless questioning what really makes a work of art, beginning with the context of its reception. “The true artist is a strategist able at all times unostentatiously but effectively to occupy the terrain (the page). It would be inappropriate to hold it against him, as his output merely helps him to maintain his position in Art circles, while expecting to do well, and, why not, to receive recognition. Ernest T.” (published in Public n°1, 1984). Ernest T.’s work is thus a systematic undertaking to demystify the core values of art: the uniqueness of the work and the artist as genius are derided. But where modernism valued the repetitive mechanical gesture or anonymity, on the contrary Ernest T. points to the fine boundary that then separated art from non-art. Long before Ernest T., Marcel Duchamp highlighted the preponderant role of a work’s reception in establishing what makes an artist and denounced the way the unique artwork is treated as merchandise, even going as far as making this fundamental critique the springboard for his own work. With the readymade, Duchamp strove to short-circuit and transcend this system. More fatalistic, cynical or disenchanted Ernest T. has no ambitions to foil the system. He is content to point out its shortcomings with ferocious humour. His humour is sometimes tinged with nostalgia (his satirical drawings recall the press in the early days of printing)) – his last stand against modernity presented as value at any price and above all as an object of speculation.

At Delme, Ernest T. showed a series of cartoons reminiscent of the press drawing (i.e. the drawing in the service of a popular form of expression); a series of Peintures nulles (null paintings): abstract geometric canvases in blue yellow and red (recalling Mondrian’s palette) composed through the repetition of a single pattern over the entire surface – the letter ‘T’ (as in Ernest T.) – narcissism at the other end of the spectrum from the universalist ambition of much abstract painting. Outside the Synagogue, Diptyque pour une famille d’hirondelle, installation pérenne (Diptych for a family of swallows, perennial installation), consists of two tiny canvases from the Peintures nulles series, set on either side of a swallows’ nest. Associated with the by definition perishable material of the swallows’ nest, the description “perennial installation” can be seen as a critique both of the aspiration to eternity that is the basis of most artistic gestures, and equally of the exact opposite, the introduction of the putrescible and short-lived as a proclamation of humble means. The purpose these abstract paintings are put to is ultimately either delirious proselytizing aimed at including even the animal kingdom, or a deliberate confusion between man and the animal kingdom, a typical ploy of satire. Lastly, on the synagogue’s upstairs floor, there were two posters on show, one a reproduction of a character from the Last Judgement in the Sistine Chapel, with a banner marked: “WHO TO BUY? The art lover is often panic-stricken at the thought of having spent a lot of money on works with no future. And yet we know that everything is written in heaven.? So put trust in clairvoyance! THE ARTS * THE STARS”. This set of posters sums up Ernest T.’s taste for quotation and collage (an easy and effective medium) and for irreverent puns.

[1] Alphonse Allais, born in Honfleur in 1954, died in Paris in 1905. Journalist, poet and humorist. Along with his writings, Alphonse Allais left a series of satirical drawings highlighting the incomprehension between artists and collectors and the paradoxical economic dependence of the ones on the others. Still well-known are “Tomato harvest by apoplectic cardinals on the edge of the Red Sea” or “Bands of drunkards in fog”, making a mockery of the monochrome long before it became a genre in its own right. Just like the early monochromes of Yves Klein, Alphonse Allais’ pseudo-monochromes only exist in the form of reproductions.