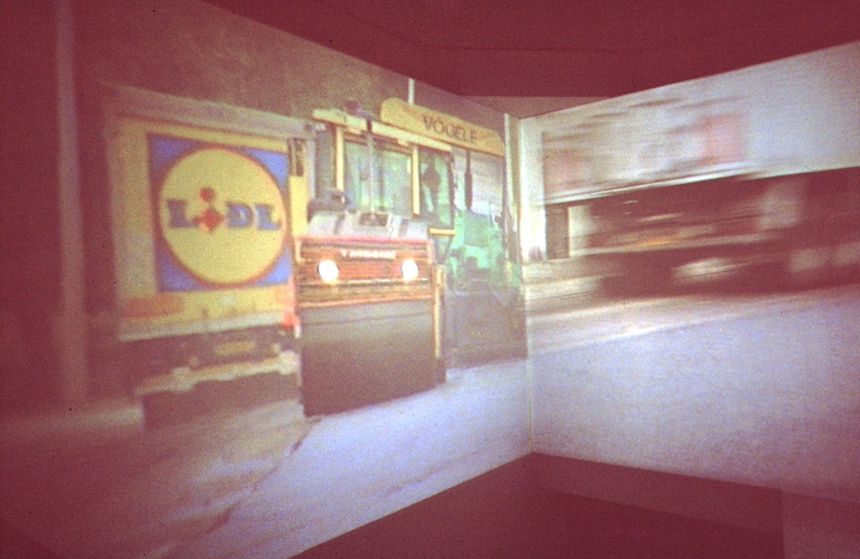 From Saturday 7 July to Sunday 9 September 2001

Céleste Boursier-Mougenot is basically a composer. He uses non-instrumental materials – live birds, pieces of crockery, vacuum cleaners – and creates devices designed to reveal or exploit their acoustic potential. As such, Untitled (1999-2002 Series) is on the face of it a purely visual installation. In a blue inflatable swimming pool half filled with water float various white dishes, bowls, glasses and salad bowls. The installation can be read first on a playful level, recalling childhood memories of fishing for ducks at the fair. The generic shapes of the crockery, white dots on a blue background further lend weight to another interpretation, and we think of a play on the history of pictorial abstraction. But the sound dimension of the piece soon becomes obvious to the viewer coming up to the swimming pools : the floating dishes move around in a gentle current, producing delicate clinking sounds when they bump into each other. The Harmonichaos piece on the other hand puts the acoustic potential of thirteen differently tuned harmonicas to its own purpose. From just looking odd - the instruments are plugged onto vacuum cleaners – the installation soon makes way for an almost mystical experience, in semi-darkness. Silently, the vacuum cleaners breathe out and draw from the instruments (which we usually associate with the folk music tradition) sounds like nothing we have ever heard before.

These two pieces are exemplary of the artist’s approach, mixing in the historical principle of the readymade with musical composition : My approach involves devising pieces to produce live music, he explains. With Vidéodrones, the audio and video installation shown at Delme, Céleste Boursier-Mougenot proposes a reflection on this notion of live music. But the piece, designed in three parts, rural (Delme), maritime (Sète and its canals), and urban (New York) is also a fragmented reflection on the notion of environment, through a visual and sound dialogue between the inside and outside of the exhibition venue. Showing live pictures of outdoor scenes outside, and using a system for turning the image into sound, he builds up a fluctuating dialectical relationship between two worlds.

For its first showing at La Criée in Rennes (November 2000), the piece was seen by the artist as a test version that came in for enhancements in its subsequent appearances. In fact Céleste Boursier-Mougenot produces several versions of all of his pieces, and each one is an opportunity to tweak the arrangement, in a gradual domestication of the sound environment until its full musical powers are established. The artist is present all the time for the duration of the show, and is constantly experimenting, as a way of integrating art with everyday life, and vice versa, something his plastic vocabulary, taken from the domestic sphere, already announced.

Lives and works in Sète, France