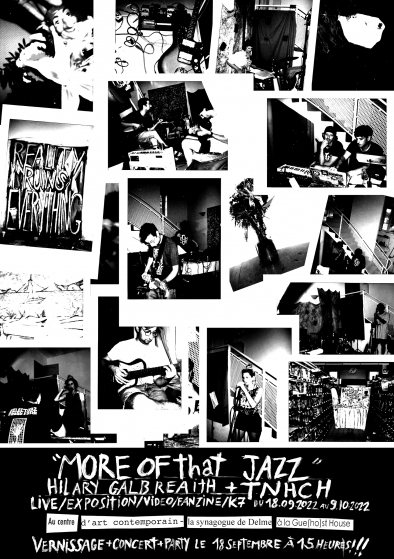 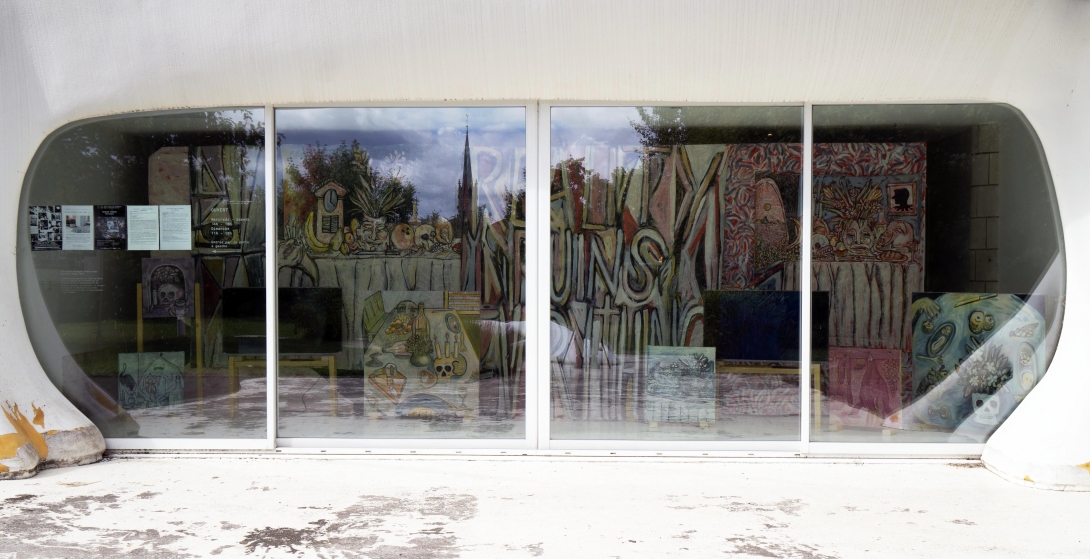 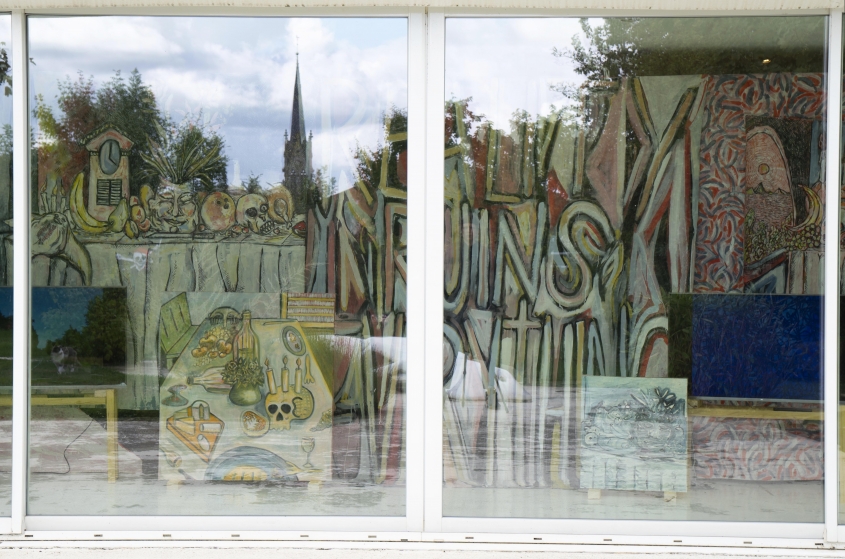 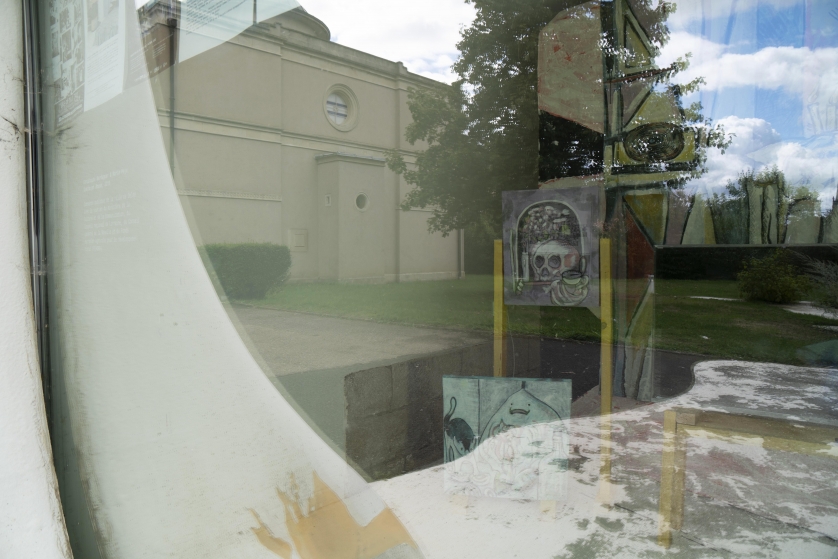 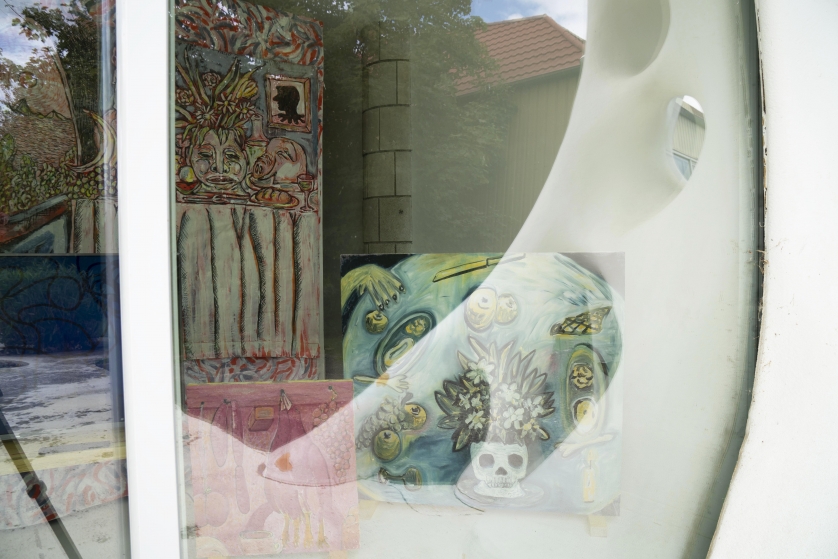 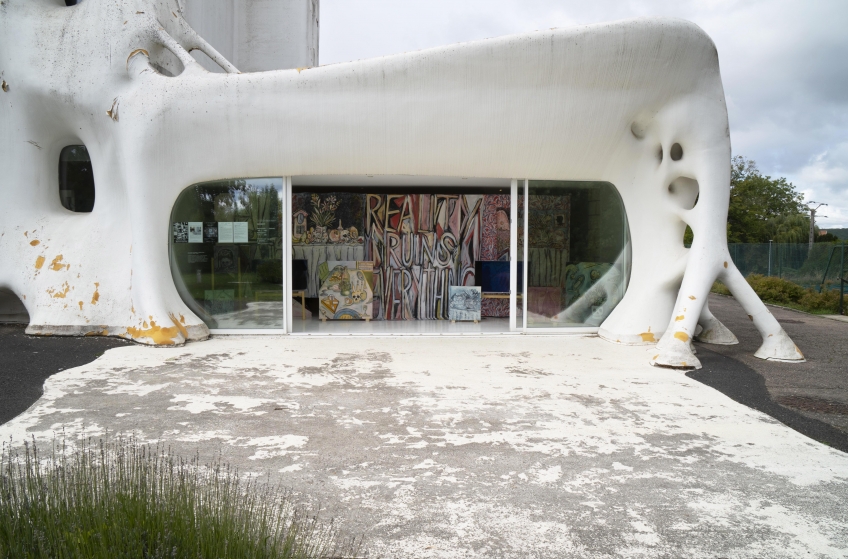 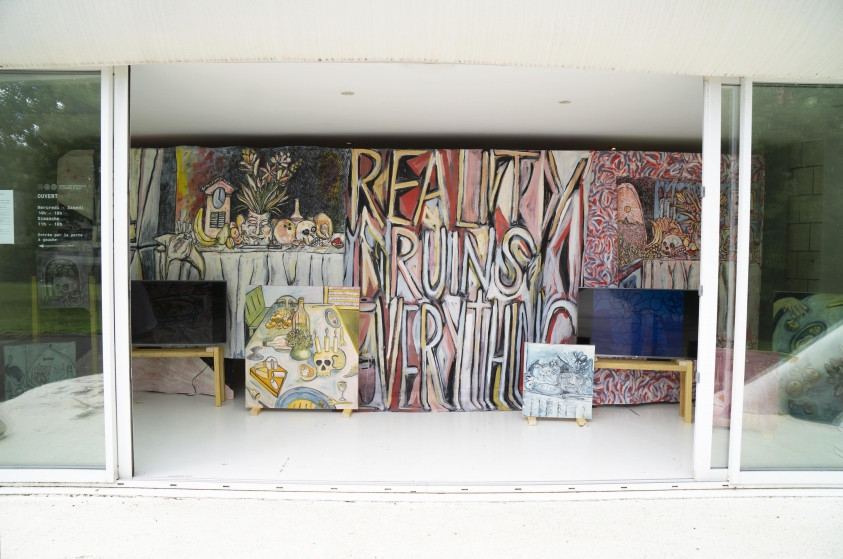 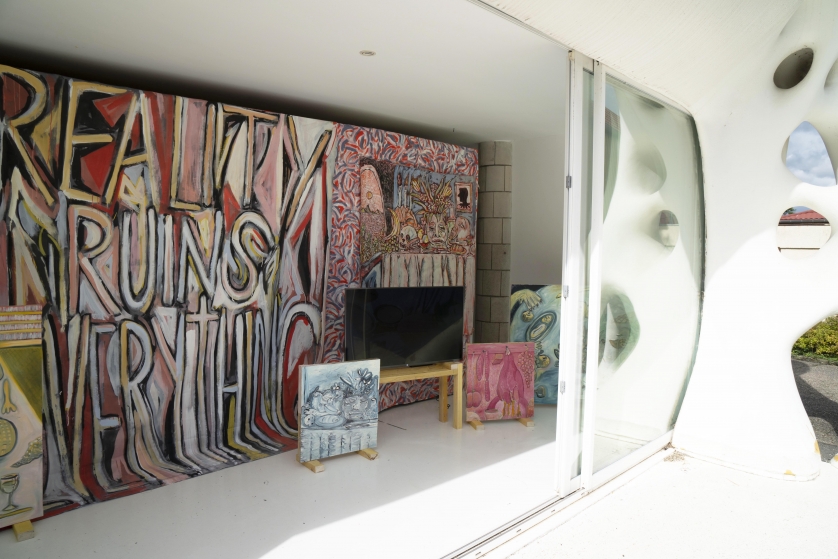 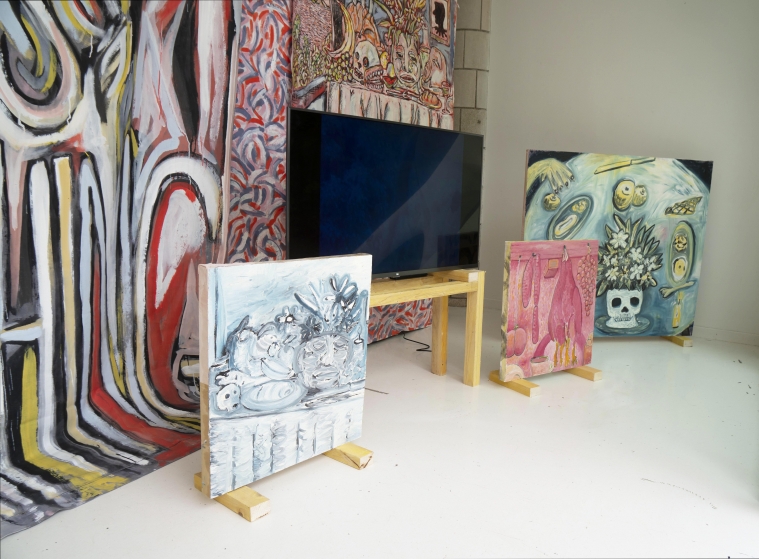 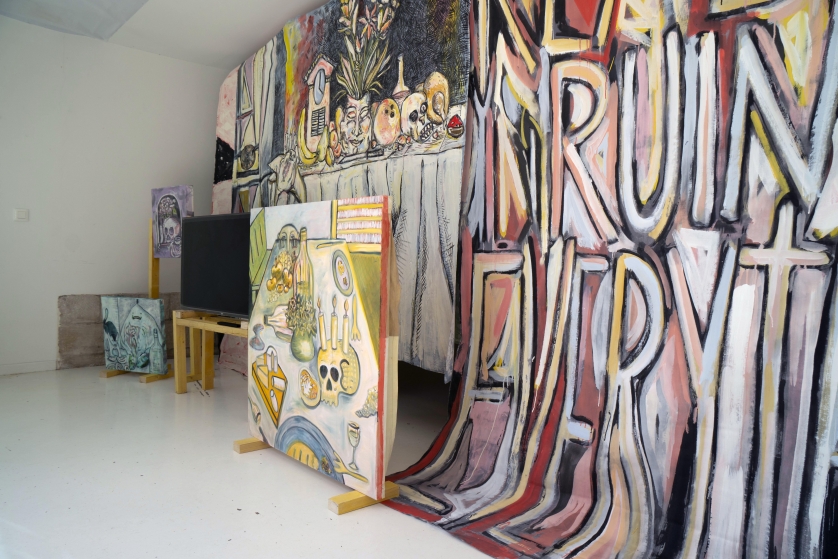 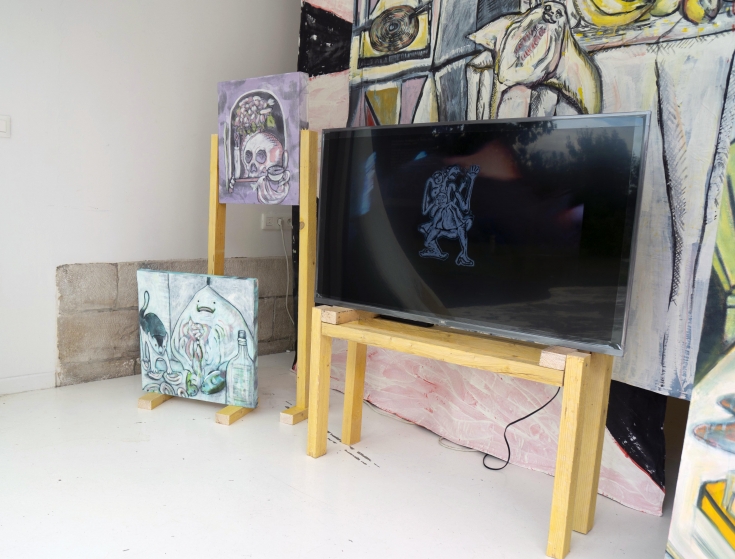 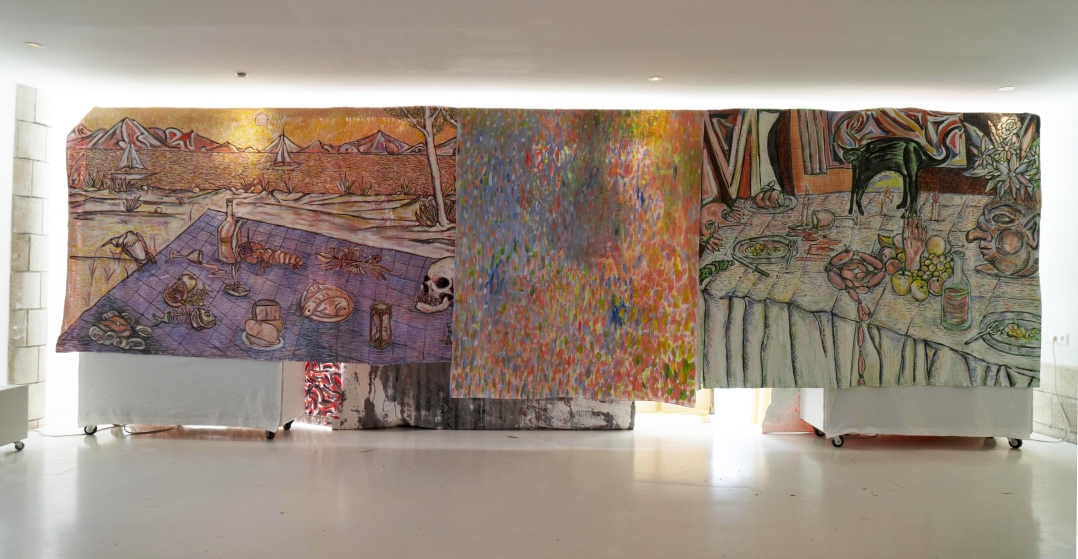 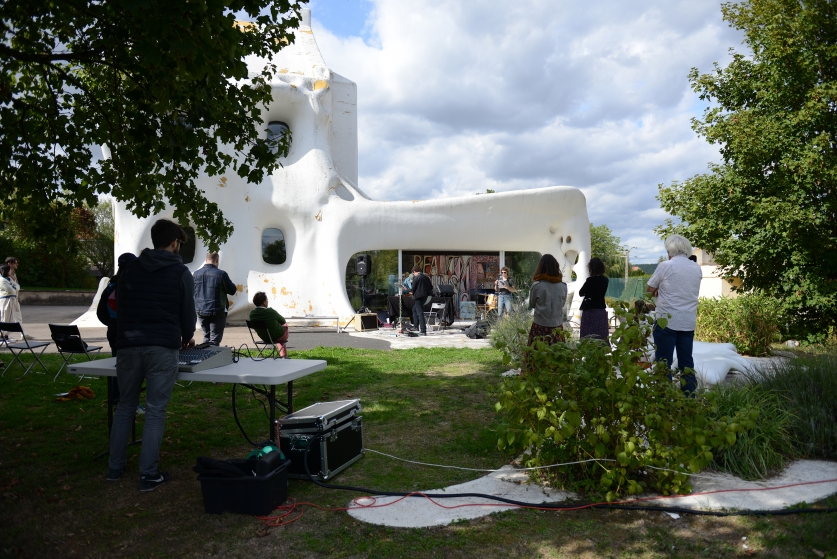 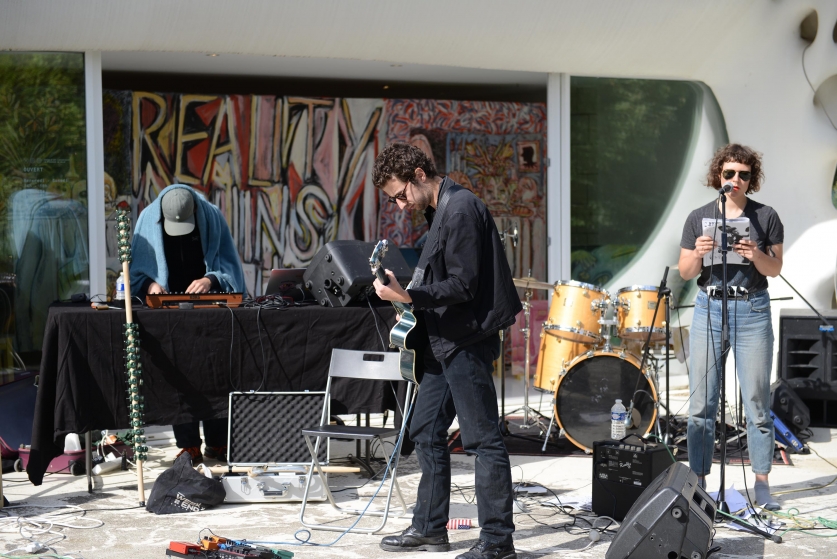 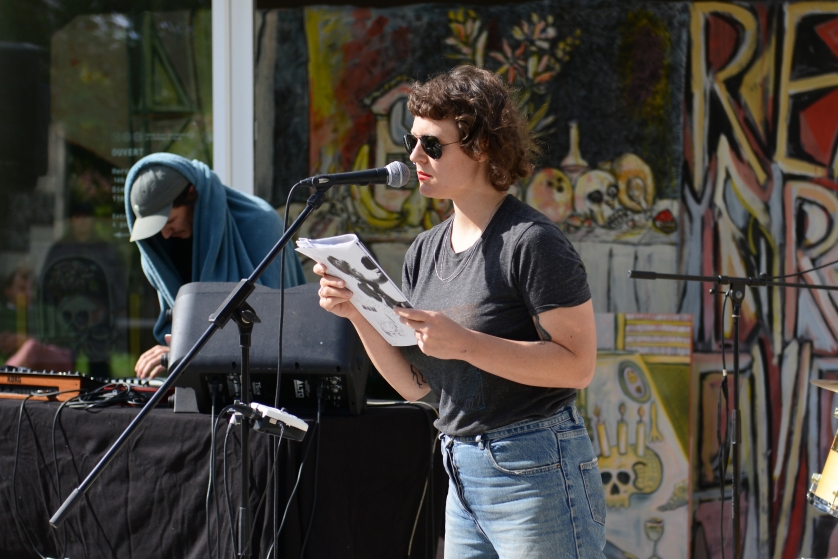 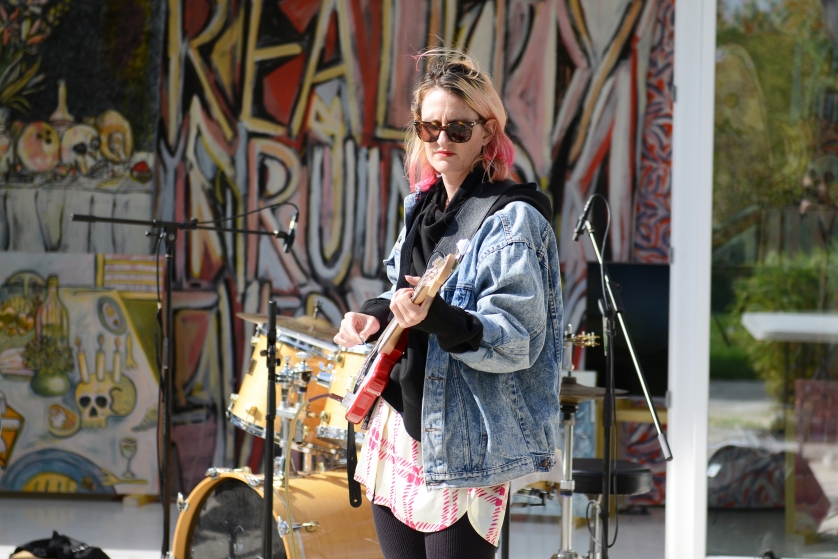 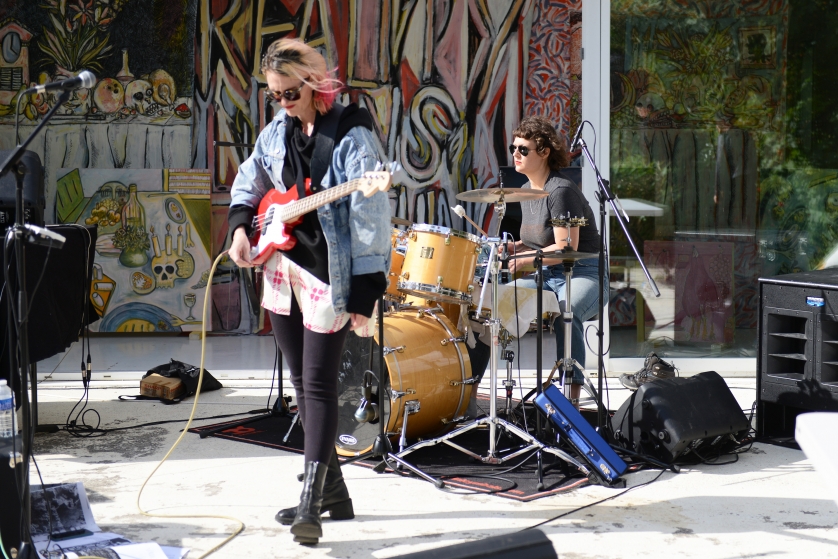 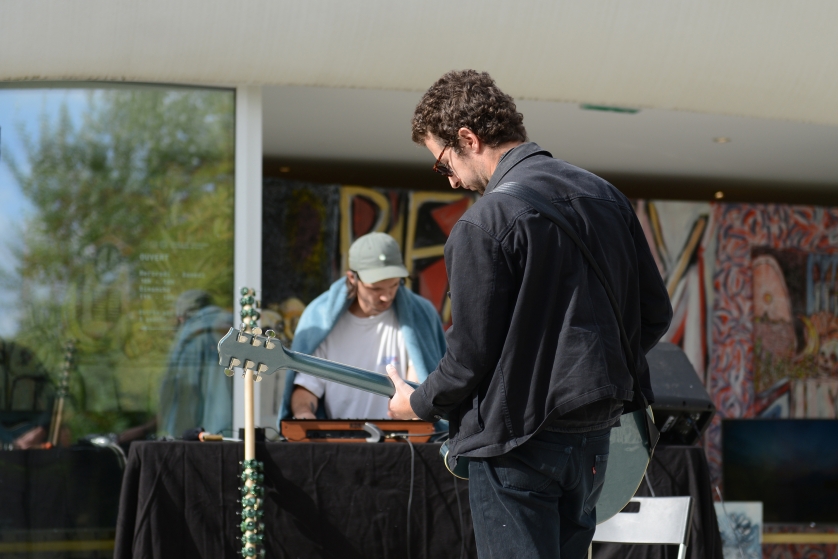 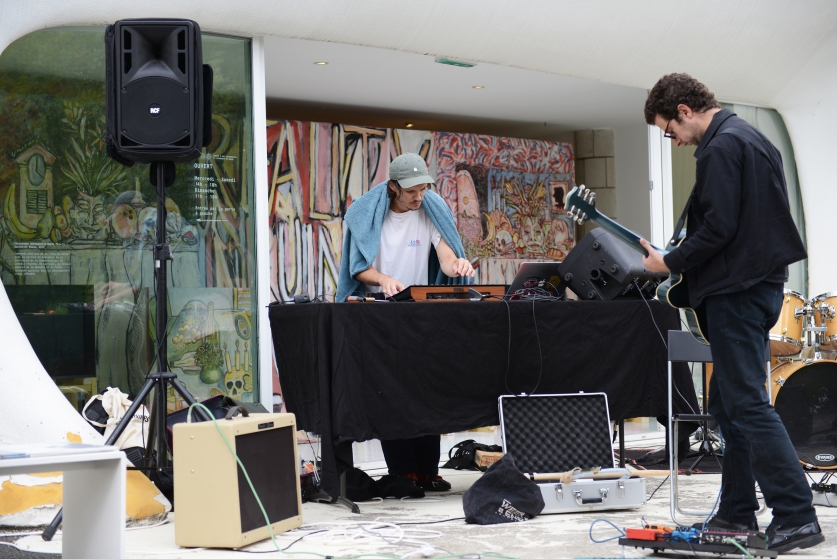 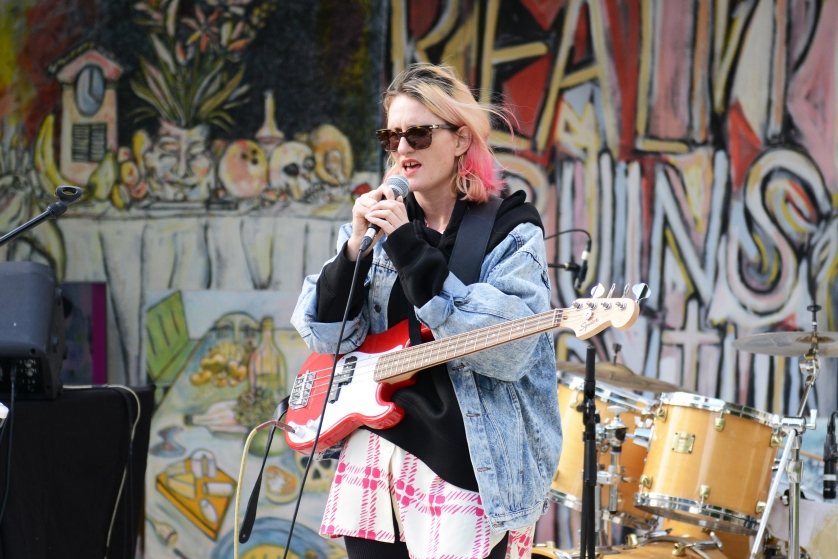 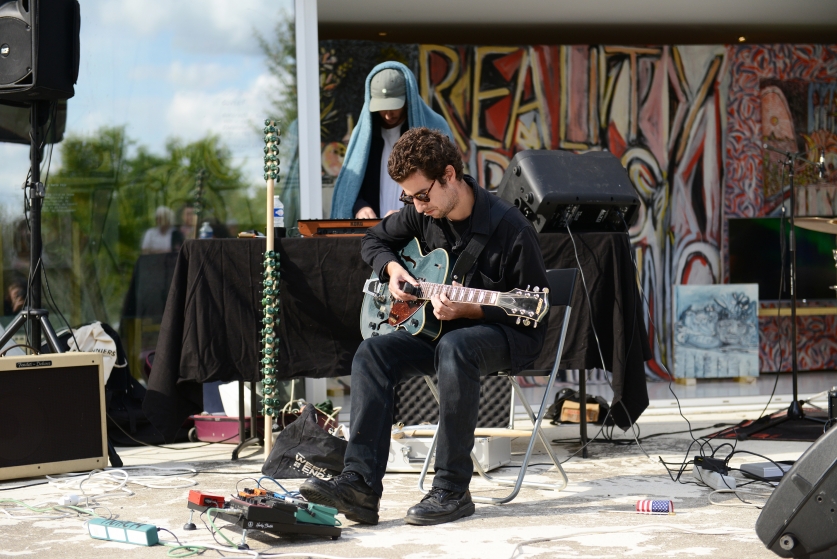 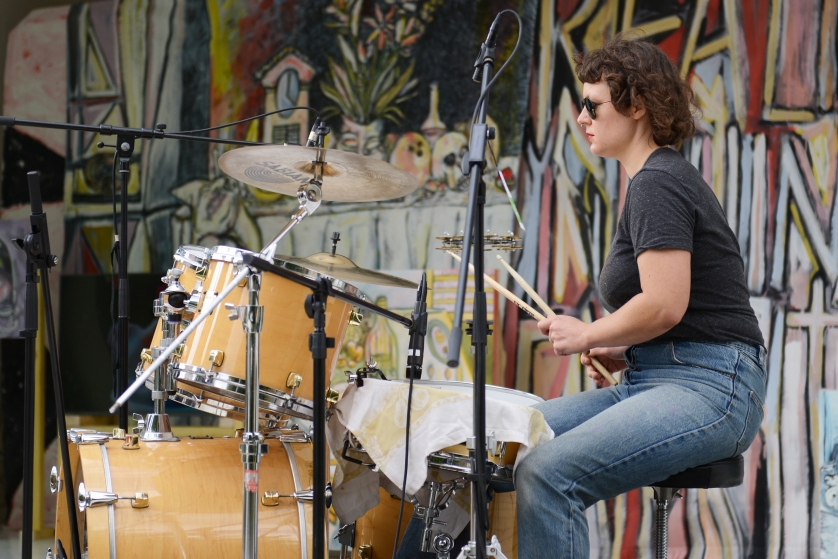 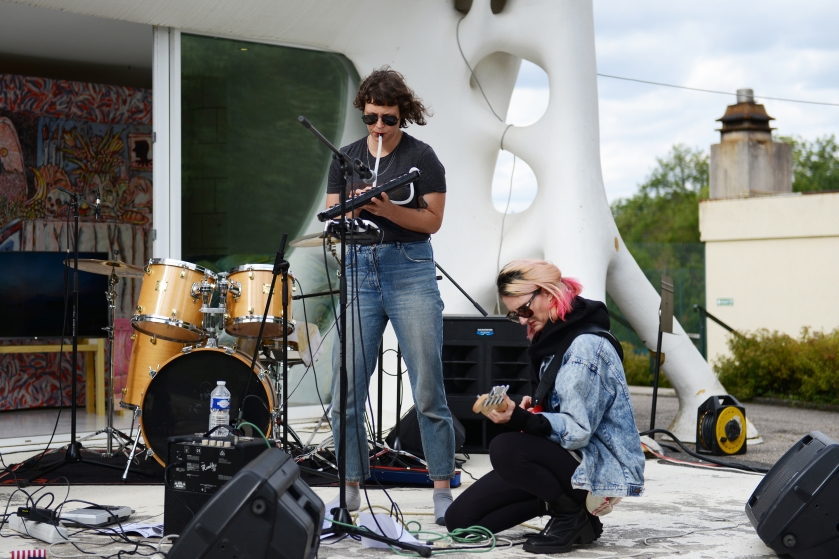 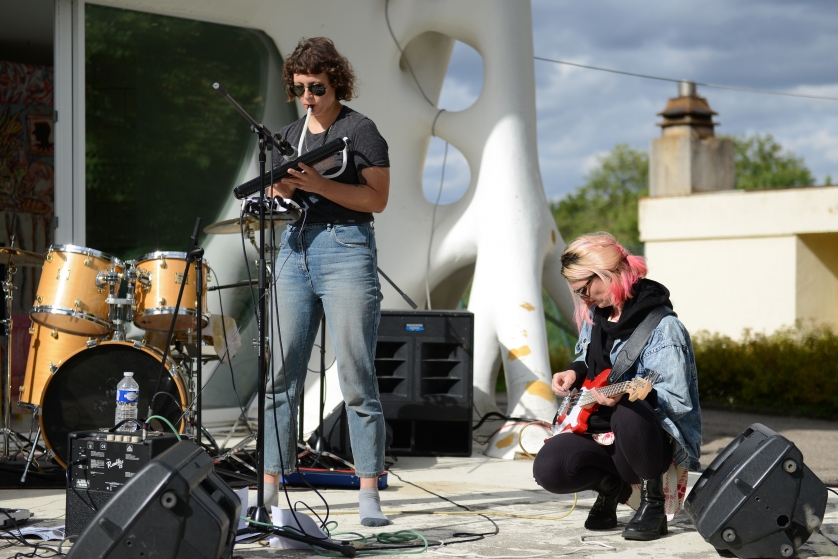 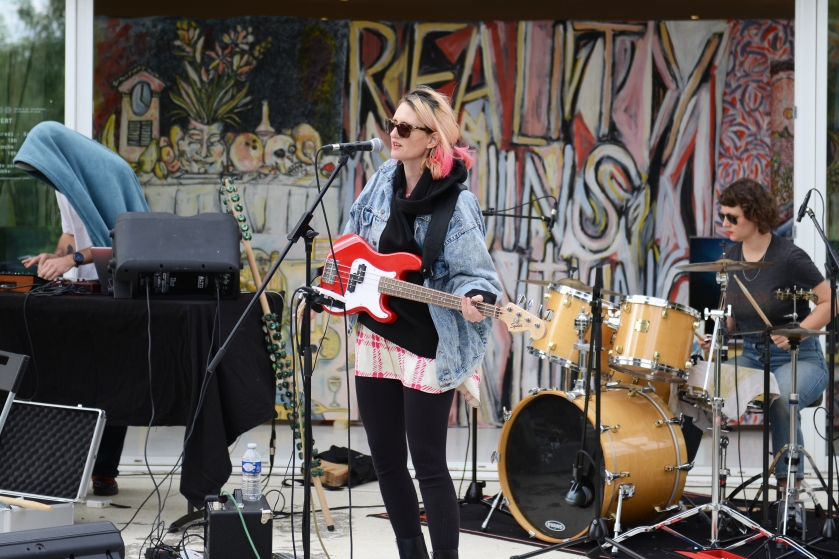 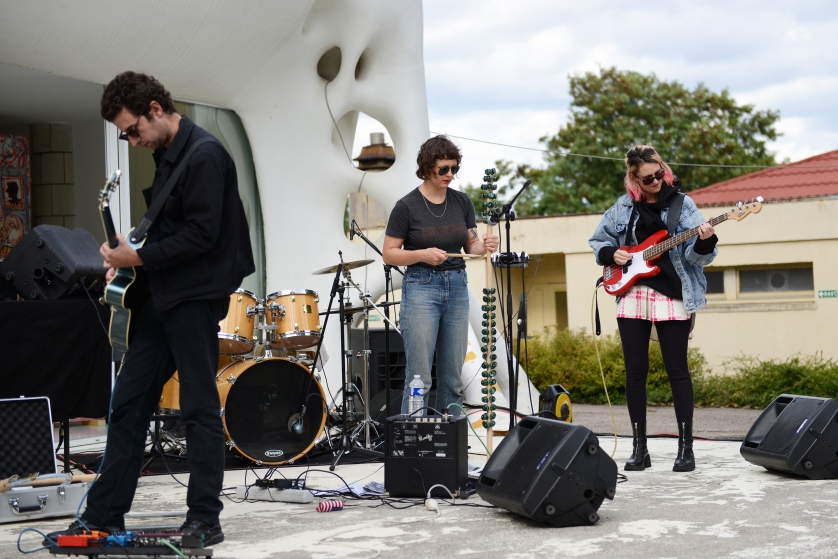 "MORE OF THAT JAZZ" / RESTITUTION OF RESIDENCY

"MORE OF THAT JAZZ" is the restitution of the residency of the artists Hilary Galbreaith, Corentin Canesson and TNHCH. Following their residency in Lindre-Basse from June to August 2022, the artists are offering a concert / vernissage on Sunday September 18 at 3 p.m. followed by an exhibition in the showcase of the Gue(ho)st House until September 9 October 2022.

Hilary Galbreaith and Corentin Canesson have recently been collaborating via the latter’s musical ensemble, TNHCH (The Night He Came Home), through on-stage blends of performances in costume and experimental music. For their residency in Lindre-Basse, the two artists decided to team up once again with TNHCH to produce a new album, along with an original artistic presentation.

Corentin Canesson’s art practice attests to an interest in painting as a medium but also as a self-reflexive practice enabling him to question its historical position, and what it means to paint in the early twenty-first century. The artist approaches painting in an uninhibited way, adopting an attitude seen as retrograde and irreverent, unafraid to appropriate yet still respectful of a medium that continues to have a lot of things to say, despite being declared “dead” by avant-gardists since the early twentieth century. His taste for the audiovisual history of rock allows him to associate codes from popular culture with those of the academic culture of “great painting”, which the artist likes to refer to on an equal footing. A generous and open, sometimes conflictual dialogue is thus established, comprising forms of all kinds, through which the surface of his canvases are transformed into dynamic and vibrant fields, as energetic as a noise or rock concert.

Also finding inspiration in the codes of popular culture and counter-culture, through a multimedia approach (video installations, costumes, sound and music compositions), Hilary Galbreaith stages strange and absurd scenarios, in which human societies and non-human, micro-organic, and animal lives intermingle. The artist’s aesthetic targets focus on proposals for the construction of alternative societies, modelled by her narratives, imagining a coherent and viable world beyond bureaucracy, restrictive technology, and predetermined chains of production, overcoming the reign of robotisation and control of all forms of living organisms. Her skills as a composer, drummer, and creator of musical instruments using recycled elements (some of which were able to complete the instrumental formation of TNHCH during their collaboration) play a central aesthetic role in her work.

The music of TNHCH and this group dynamic act as a catalyst to create new and experimental forms of sound, within the specific framework of the Lindre-Basse residency. Like many other bands, such as Faust, Pink Floyd, Captain Beefheart, or Nirvana, having come together in the countryside to produce a new album within a calm and inspiring living environment, TNHCH and Hilary Galbreaith wanted to push the limits of their collaboration even further, taking the time to devise an opus together that would merge their respective approaches. For this collective enterprise, they agreed to create an auditory and artistic laboratory, a recording studio workshop, in which to compare their painting work, posters, installations, videos, performance, and musical creation. At the end of this research period, TNHCH and Hilary Galbreaith will meet for a concert in Delme to play their new creations in public and to produce an album that will also soon be available at the art centre’s bookshop.