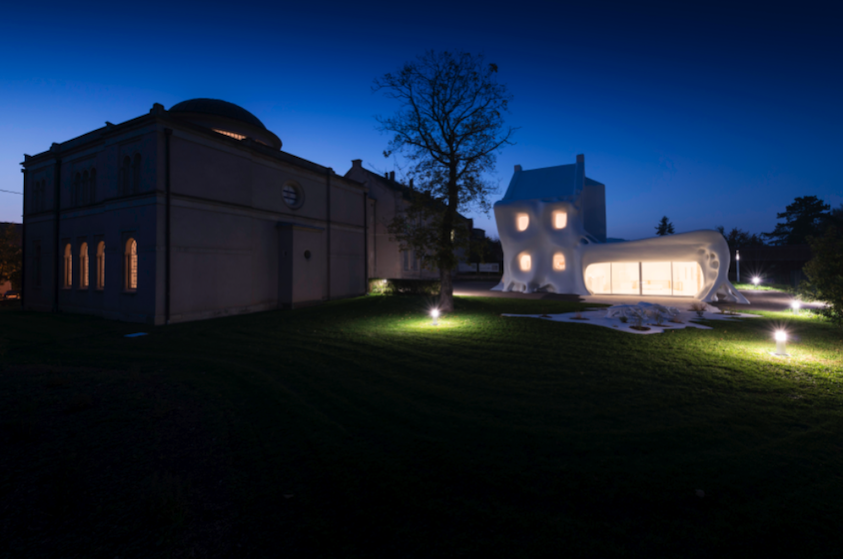 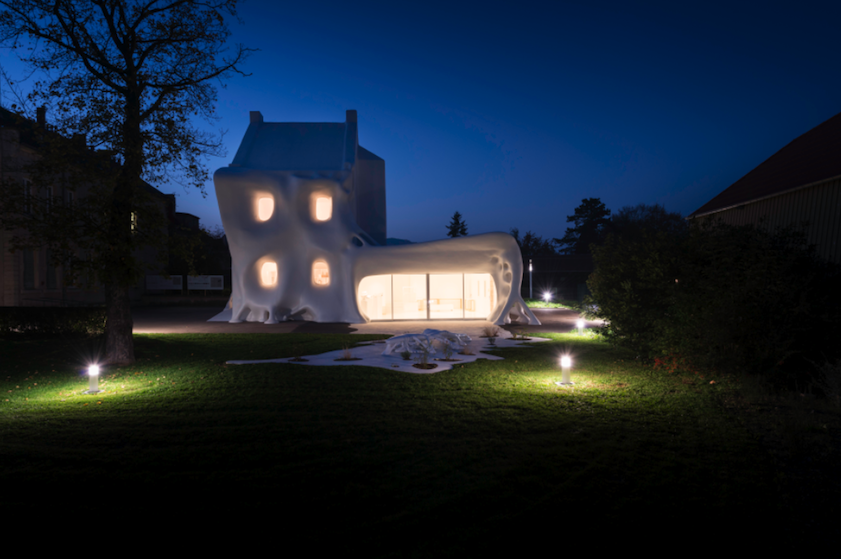 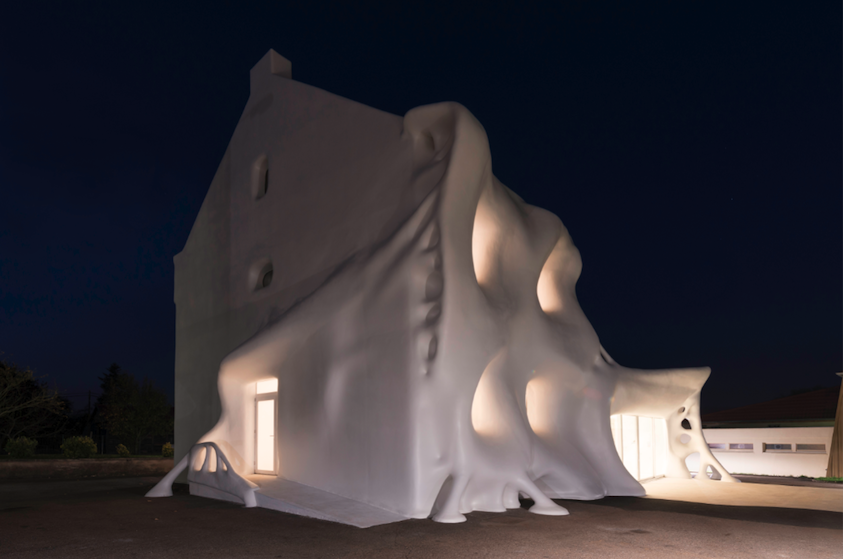 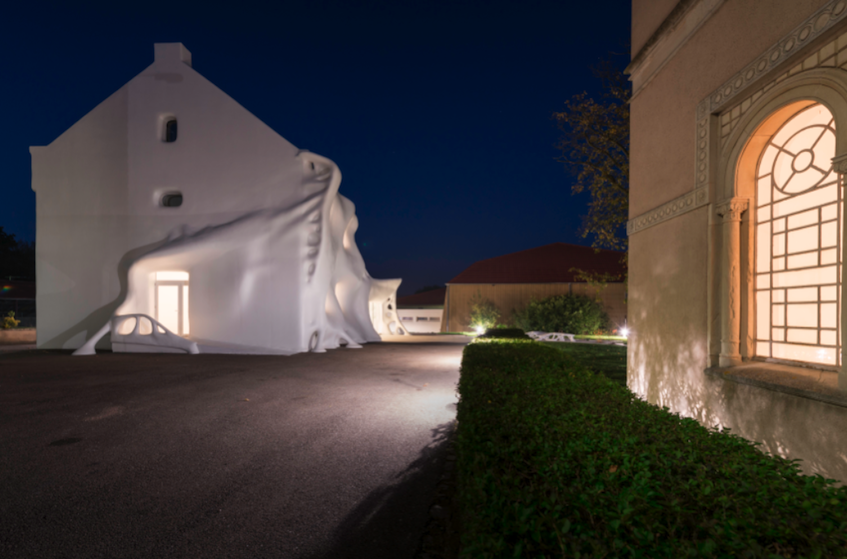 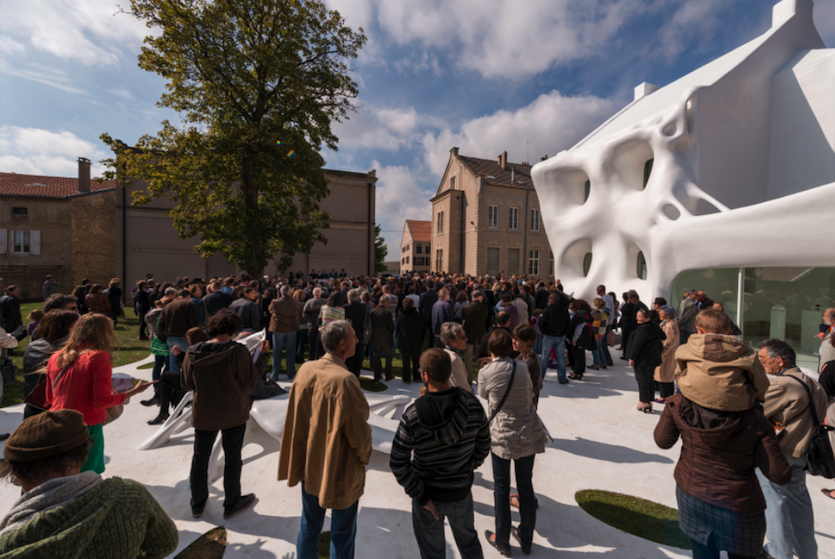 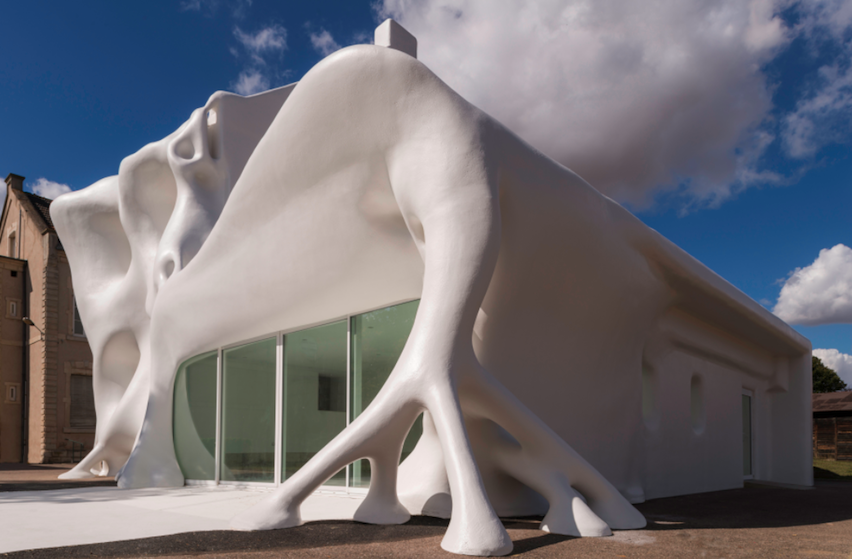 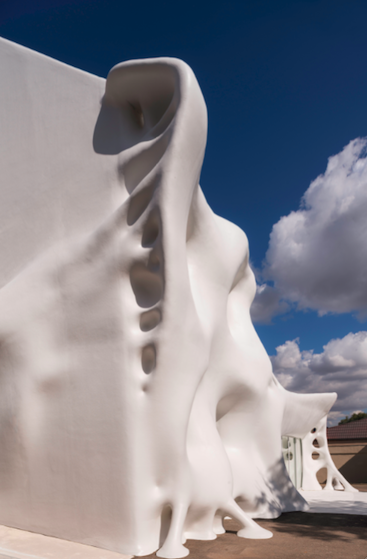 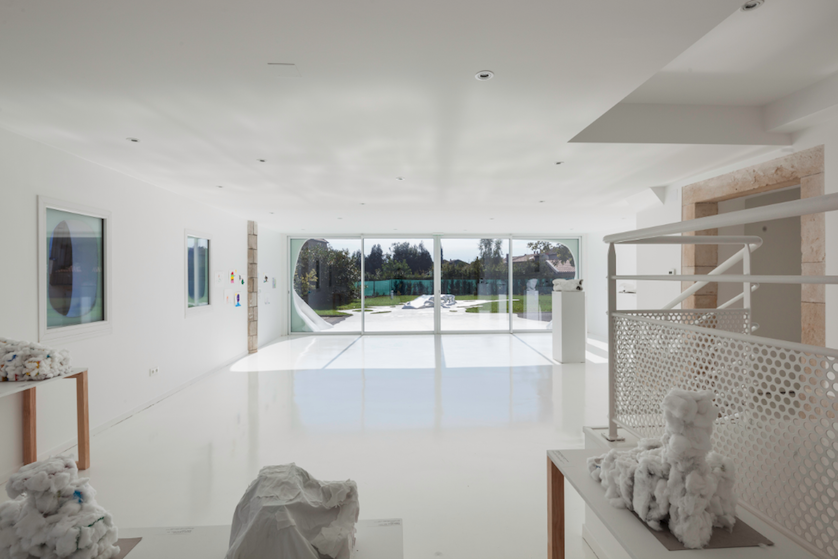 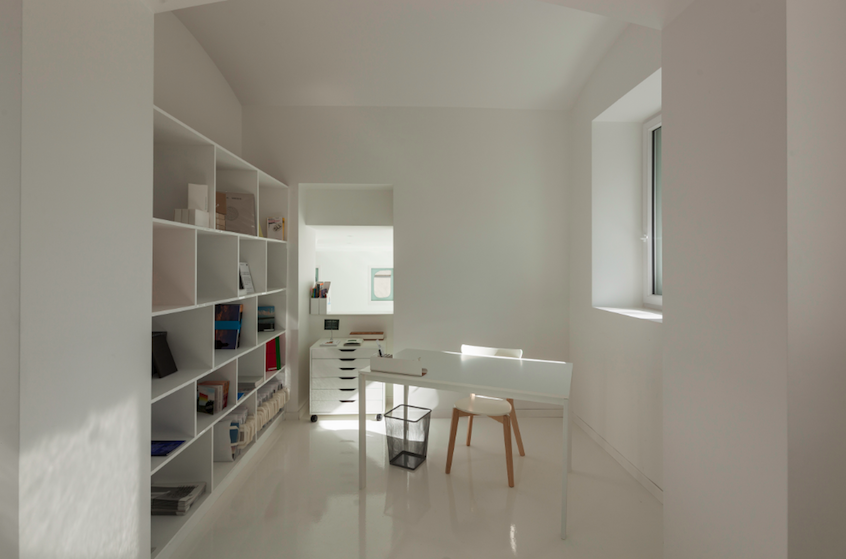 GENESIS OF THE PROJECT

Two principle thrusts determined the subject of the commission given to artists Christophe Berdaguer and Marie Péjus: the need to redevelop the area surrounding the CAC - la synagogue de Delme, and the need to make the art centre more visible to passers-by and drivers on the main road that crosses Delme.

The origins of the idea date back to September 2005; the project inaugurated in 2012 is the fruit of a long process that united the efforts of several partners and collaborators.

The area covered by the commission includes the spaces between the town hall (once a court and a school), the synagogue and the motorway at the front, plus a small house (once a prison, school, shop and funeral home), a tennis court and gym belonging to the college at the back. It therefore takes in not only the art centre, but a town, whose government was designated as the contracting authority from the outset.

One of the project’s objectives was to change how a public space is used, a space that, in this particular case, constitutes the heart of Delme’s cultural, community, sporting and government life. For many years there was a funeral home located in a small house behind the synagogue and the town hall, and its presence implied all of the reserve one might imagine… The new allocation of the premises made it possible to consider recycling it, through an ambitious artistic proposal, enabling the premises to be seen differently without erasing the past.

For the art centre, this commission responds to concrete needs, linked to its visitor reception, mediation and accompaniment mission. In practice, this means being able to receive groups, offer accommodation to artists during setups, and offer visitors a documentation centre enabling them to find out more about contemporary art and the exhibition.

For twenty years, the CAC - la synagogue de Delme has been developing its activities in collaboration with the region it belongs to. In 2002, it linked the exhibitions in Delme to an artist residency program in Lindre-Basse, in partnership with the Lorraine Regional Natural Park. In 2003, the permanent post of Public Relations Manager was created. The tasks are numerous, and the challenges they present have always been seized with passion. Little by little, mediation tools have been designed to give visitors the best possible guidance: artistic creation workshops, teaching packs for schools, public discussions with artists, art and philosophy tasters…

Although our mission to provide the public with guidance is particularly important in a region where there are fewer cultural offerings than in urban centres, the CAC - la synagogue de Delme had no real mediation centre to speak of.

The building was registered as a historical monument in 1984, so this work of architecture is protected. Inside, the architectural unity lends itself to works that take over the whole space, and this space is entirely dedicated to exhibitions.

So how could we help visitors extend their visits? What sort of documentation space could we offer them, for information on the artists and on contemporary art in general? How could we organise visits that were as comfortable as possible, from schools and other groups, of all ages and perspectives? How could we develop practical art workshops for the very young? How, finally, could we redesign the circulation areas between the synagogue, the town hall and the former funeral home, enabling them to be seen from a new perspective, taking account of the memory of the place when constructing the future?

It was in this context that a request was made to the Ministry of Culture and Communication for a public commission, and these questions shaped the artists’ ideas. Taking into consideration the practical needs as well as the history of the place, the artists proposed a remarkable work of art, entitled Gue(ho)st House, the design and creation of which were conceived in close collaboration with the c.H-D art production studio.

Christophe Berdaguer and Marie Péjus have been working together for fifteen years. Sharing a passion for the architectural utopias that punctuated the 20th century, to them, architecture and cities are like ghosts of history: projections of the body, the psyche, or of social organisations. Their work draws on various disciplines: biology, psychoanalysis, neurology, sociology... To Berdaguer & Péjus, a house is not just a purely mechanical construction, it is no less an aggregate of emotions, perceptions and memories. This is why in Delme, they have quite naturally been working with the place’s memory.

Born in 1968 and 1969 respectively, Christophe Berdaguer and Marie Péjus live and work in Paris and Marseille. Residents of the prestigious Villa Médicis and laureates of the Ricard Foundation Prize in 2007, their work has been presented in numerous solo and group exhibitions in France and Europe over the past fifteen years. In 2003, they took part in the Unheimlich exhibition at the CAC - la synagogue de Delme.

In 2012, their work has been the subject of a major solo exhibition at the Villeurbanne Institute of Contemporary Art, and was presented at the Musée du quai Branly as part of the exhibition Les Maîtres du Désordre (Masters of Disorder).

1881-1882: under German occupation, the courthouse (today the town hall) is constructed, as well as the prison behind it.

1918: after the return of the French, the prison was never really used.

1960: the courthouse closes its doors and moves to Château-Salins.

1961: the town of Delme purchases the former courthouse and outbuildings.

1991: a new funeral home opens in the former prison.

September 2005: first meeting at the town hall to study the feasibility of a project to improve the area surrounding the synagogue as well as the exterior circulation spaces.

December 2005: the municipality is designated the contracting authority.

2006: the specifications of the public commission are determined.

2010: the project proposed by Berdaguer & Péjus is approved by the National Council for Public Artistic Commissions. The funeral home moves to new premises. The house behind the town hall is left vacant.

The house was completely covered in polystyrene. The various elements were manufactured in a workshop, in blocks measuring 1m3, based on digital files.Around fifty blocks were chemically sealed and glued to the walls and roof of the house.
After being polished, the polystyrene was covered with two coats of sprayed polyurethane resin. This provides a solid, waterproof skin covering the whole building.
The resin, naturally yellow, was painted white.
The polystyrene and resin cover provides the building with high quality insulation.

The bench on the concrete slab was initially sculpted from a block of polystyrene; a steel frame reinforces it. The whole thing was covered in polyester resin and polyurethane paint.
The redevelopment of the surrounding area would not have been complete without the creation of a new garden containing trees and flowers intended to make this space more convivial and uniform.
In front of the synagogue, the gates separating the building from the road were removed. A new illuminated sign draws attention to the art centre day and night.
Finally, an illuminated path links the road with the space behind the synagogue.

What is a public commission?

The public commission represents the desire of the state, through the Ministry of Culture and Communication (General Department of Artistic Creation), to support multiple partners (local government, public institutions or private partners), in their efforts to enrich national heritage and the living environment, through the presence of works of art outside of institutions specialising in the field of contemporary art.

Its aim is also to provide artists with a tool that enables them to create projects of a size or scale requiring unusual resources.

The public commission is therefore both an object—the art that, coming out of reserved spaces, goes in search of the people in these living environments, in the public space—and a process that is marked by different steps, from the sponsor’s initiative, to the creation of the work by the artist, to its public reception.

This purposeful, ambitious program has breathed new life into public art. With a presence in very diverse places, from urban areas to rural communities, from historical monuments to gardens, from tourist sites to the new space that is the internet, contemporary art in the public arena puts into play an extraordinary variety of creations including sculpture, design, arts & crafts, new media, photography, graphic art, landscaping and lighting.

The aspirations of public commissions have evolved considerably. The use and functionality of works is no longer overlooked. The projects can sometimes have an ephemeral quality (work on decorations or an event), providing a new and striking perception of the space.

This support for the arts from the Ministry of Culture and Communication responds to the need to broaden the audience for contemporary art and encourage artists to create unusual and exceptional works.

Gue(ho)st House is a public commission of the Commune of Delme supported by the Ministry of Culture and Communication (General Office of the Artistic Creation  / Regional Department of Cultural Affairs), the Lorraine Regional Council, the Moselle Department Council and the European Agricultural Fund for Rural Development (EAFRD).