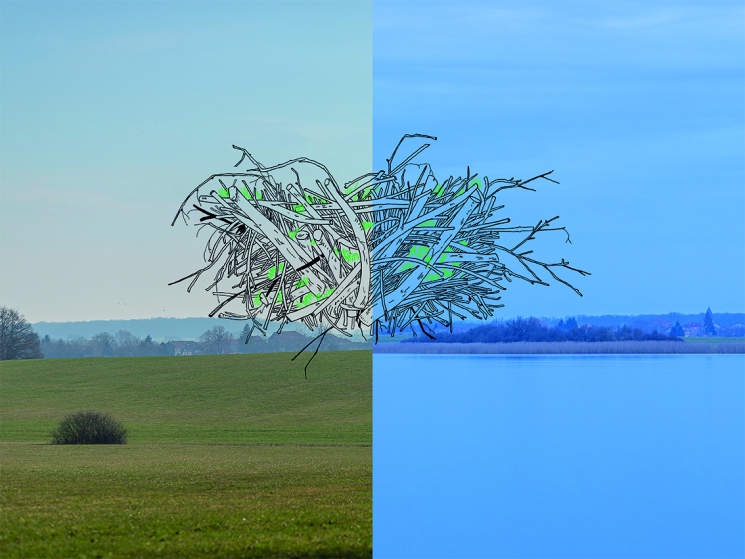 The CAC – la synagogue de Delme invites you to the open studio of Princia Itoua on Friday 20th May 2020 at 6:30pm at 10b rue des cigognes, Lindre-Basse.

Princia Itoua has chosen to reside in Lindre-Basse to create variations here on his concept of “Paysitant”,[1] focusing on his current concerns regarding the interactions between the landscape and its inhabitants, the way in which the one transforms the other. Through his poetic approach, the artist wanders and simply lets these signs of perpetual migration come to him, such as the swamp of Lindre, emerging like a huge sea to traverse; the name “Lindre”, from the word “linter” meaning flat-bottomed boat, like that of the boat people; the enormous cranes’ nests, a site of temporary protection destined to be destroyed, which for him become sculptures; or the salt, which interests him in that it was an old form of taxation (the gabelle), but also as a precious and much-coveted resource. The artist consigns all of these findings in a logbook presented live on social networks each week, allowing him to share his way of inhabiting the Lindre territory in his own way and of poetically interpreting its landscape.

[1] Translator’s note: this is a compound neologism, combining the words pays (country or land) and habitant (inhabitant).