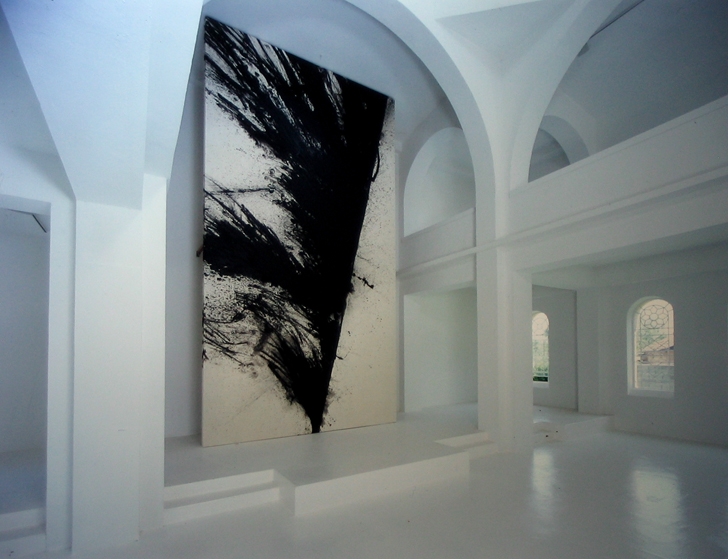 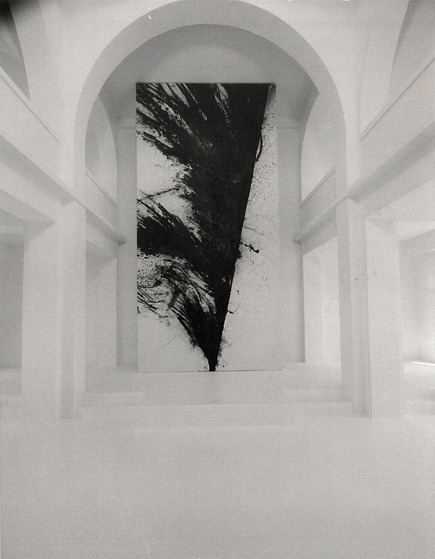 Balthasar Burkhard and Bernard Borgeaud are not just two artists belonging to the same generation.  Their atypical careers introduced them to an unusual circle of encounters at a very early stage:  Bernard Borgeaud was a Paris-based art critic working for a weekly magazine; Balthasar Burkhard, for his part, was a photographer working for the Bern Kunsthalle in Switzerland.  Well aware of events which at the time pointed to a certain artistic revival, they took part in the challenges raised by people involved in the art scene about such changes.  In this regard, in 1969, the event which produced the exhibition When Attitudes Become Forms [Quand les attitudes deviennent formes], brainchild of the Bern Kunsthalle curator, Harald Szeeman, opened them up to radical artistic experimentation.

Balthasar Burkhard instantly asserted photography as a fully-fledged medium.  In his constant quest to destabilize the gaze, he is forever pushing the usual boundaries of photography as a way of reporting reality.  The way he uses close-ups, full frontal shots, framing and the fragmentation of the subject, heightened by using series, are among the many tools which he uses to perfection to belie prejudices and reveal the essence of perception.  His pictures with their often monumental dimensions convey a viewpoint which the naked eye rarely achieves, dictating a necessary education of the eye.  The series dealing with the human body, which revealed this artist's work to the public, offers a concrete example of a photographic method leaning just as much towards sculpture and architecture as towards painting.  Involved here are series of international megalopolises, such as Los Angeles and Mexico City: Burkhard duly brings in a radically opposed viewpoint, and decides to take an irrefutable distance from the world by calling upon the aerial shot. The viewer's eye lacks just as many references and landmarks in these photographs, and a detailed scan of the picture's surface, looking for a reassuring human figure, is not enough to get rid of the disquieting sense of urban activity.

Bernard Bourgeaud's photographic compositions produced in the 1980s unfurl in space and sidestep any traditional linear reading--no single viewpoint, no possible identification of the subject, but rather the repetition of modules, very tight framing, black and white prints, and monumental dimensions. Little by little the artist then drew away from photography, as if it had handed over the nub of its secrets, and went on to develop a definitive interest in painting in the 1990s. This radical decision was not incongruous once it is known that the artist makes use of these same parameters in painting--the graphic sign. Notions of framing, off-screen, so to speak, the viewer's shifts and demands, and speed of execution all feature strongly in the making of his drawings, which are usually large format. For the Delme Synagogue venue, Bernard Bourgeaud was invited to produce a site-specific work, something he had rarely had a chance to do, until then. The height of the space beneath the vault inspired him to produce a drawing using oils, applied with a rod more than 20 feet in length. The composition was actually worked on in a horizontal position to enable the artist to complete it quickly, a "graphic split second", using the dimensions of a body moving about in space. But in return it involved the viewer vertically in the show, in a total immersion and dizziness of paint. The work's subtitle, Infracassable, à Booker Ervin, also underscores the artist's admiration of American jazz musicians of the 1950s and 1960s, whose ability to improvise and whose rhythmic wealth give rise to a stirring tension between the calling to go beyond and spill over, and a deliberate restraint in expression.

The exhibition which brought Balthasar Burkhard and Bernard Bourgeaud together in 2000 at the Delme Synagogue gave visitors a chance to gauge the significance that each artist affords the place of the body in creative artworks, be the creative element due to the artist or the onlooker.

Lives and works in France

Lives and works in Switzerland and France