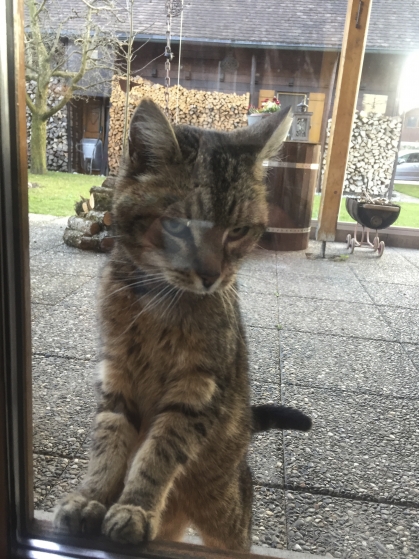 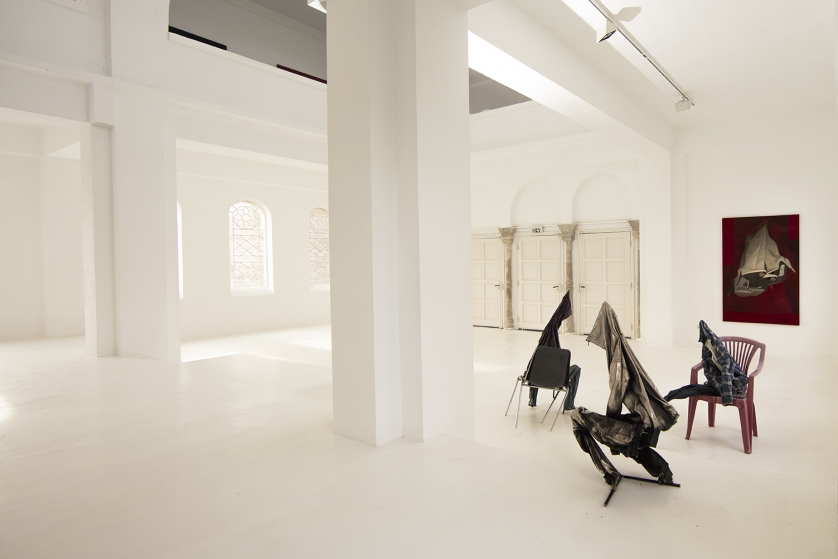 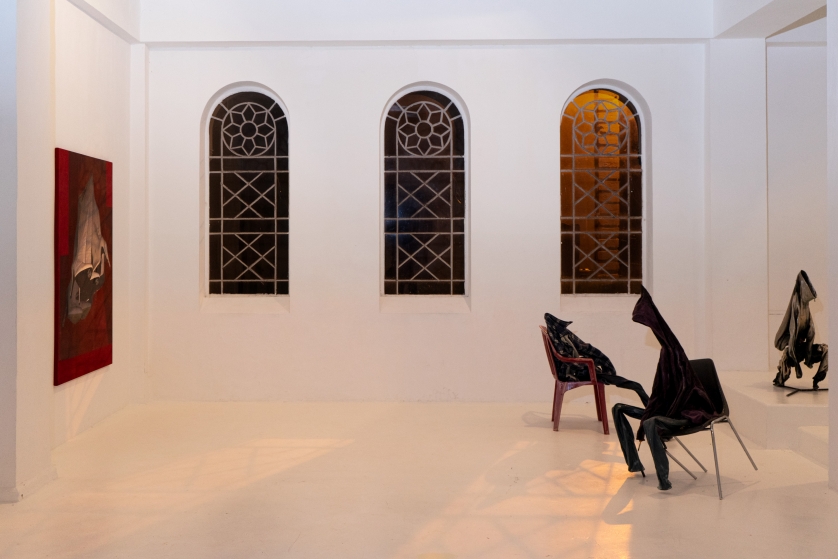 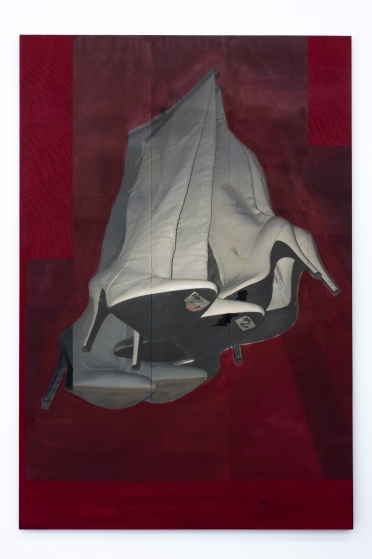 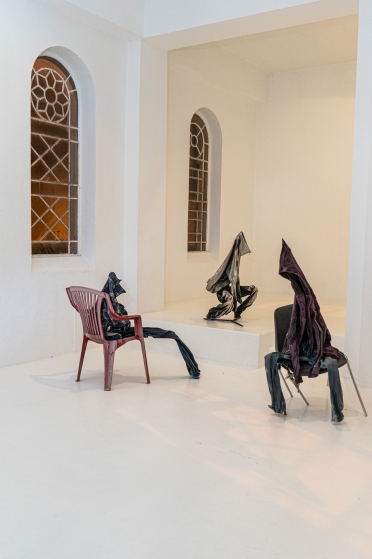 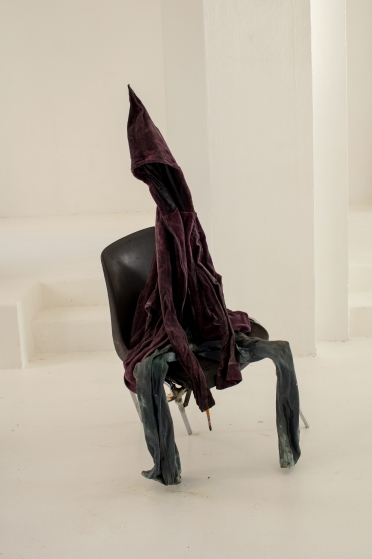 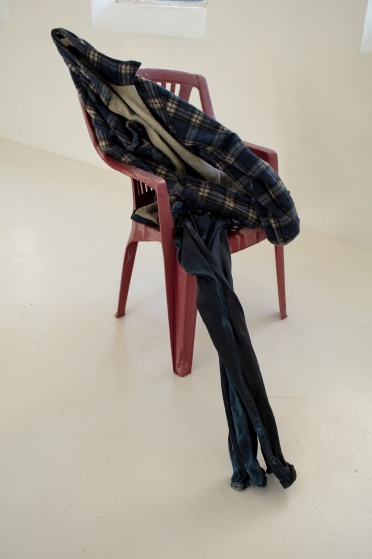 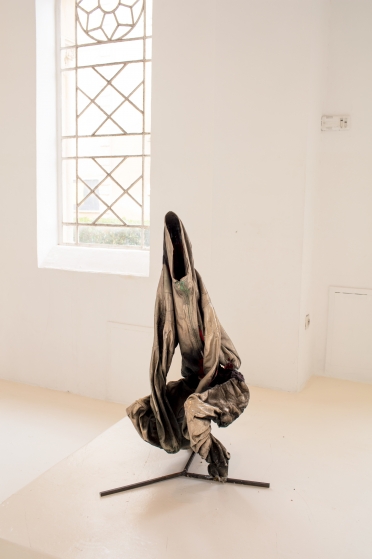 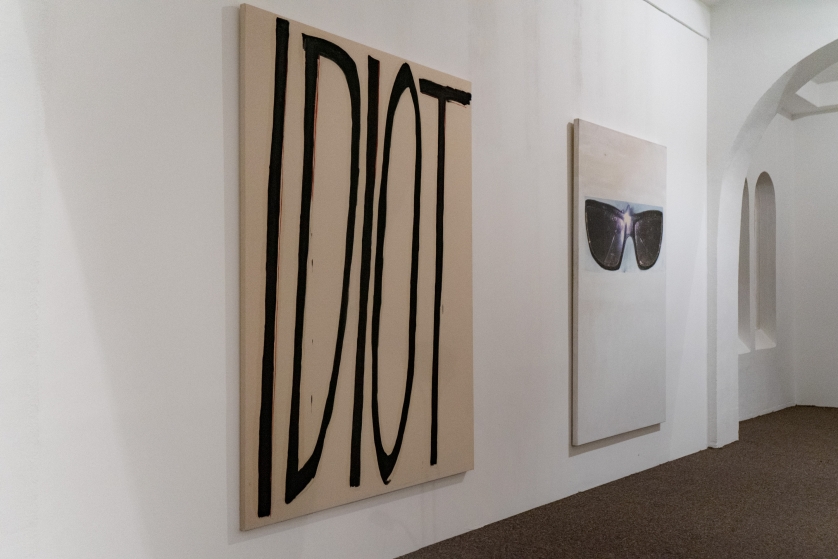 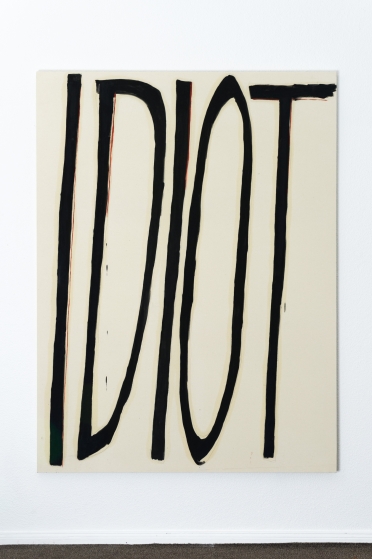 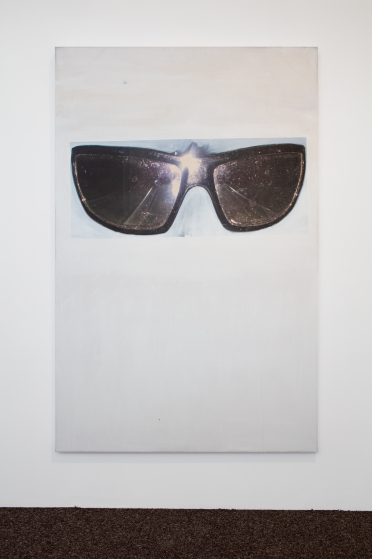 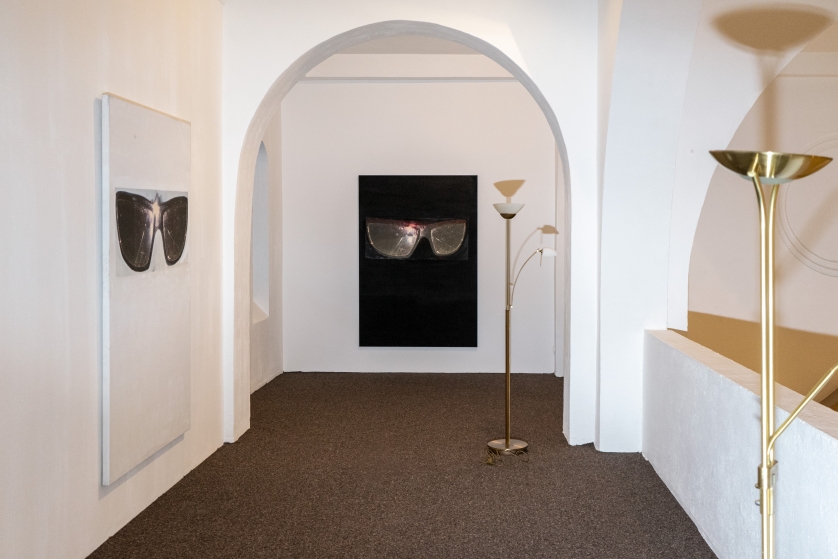 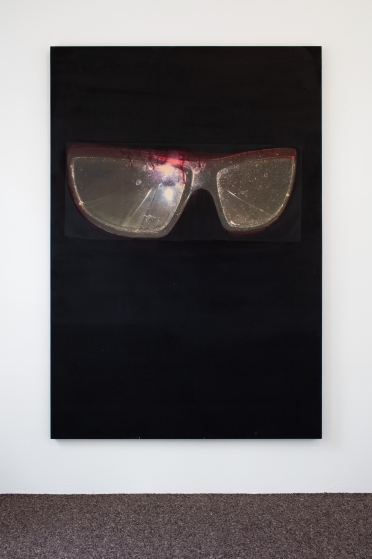 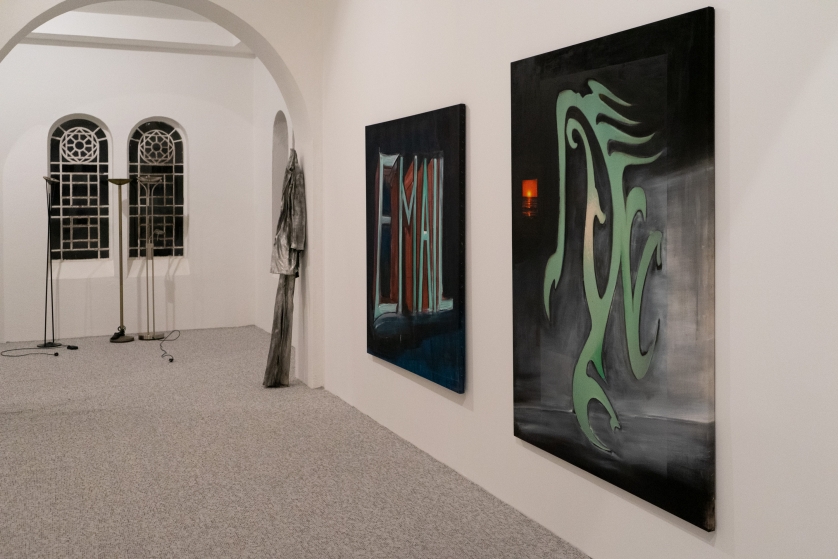 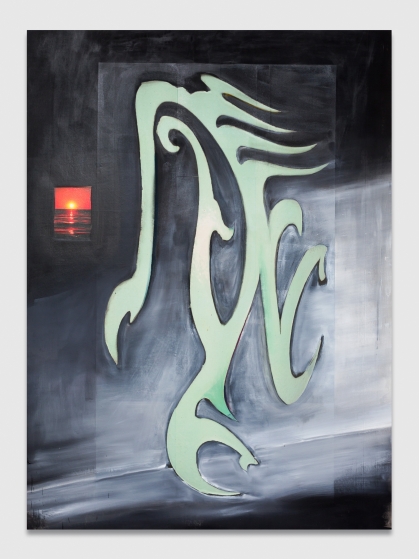 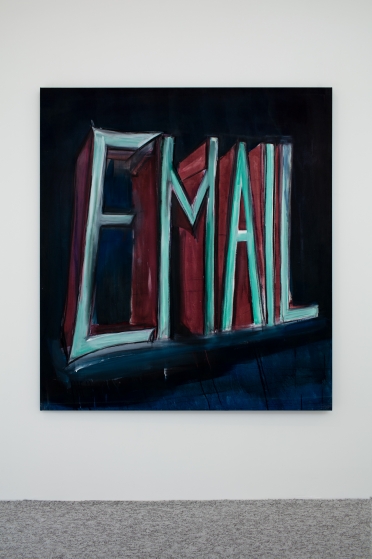 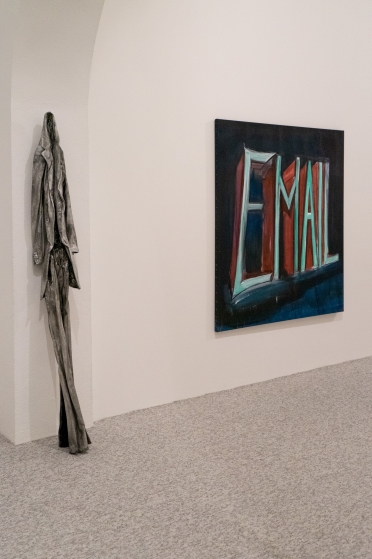 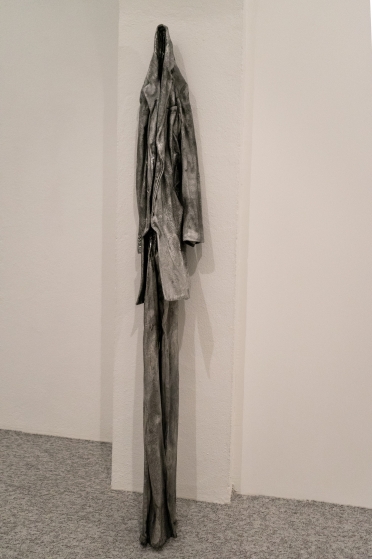 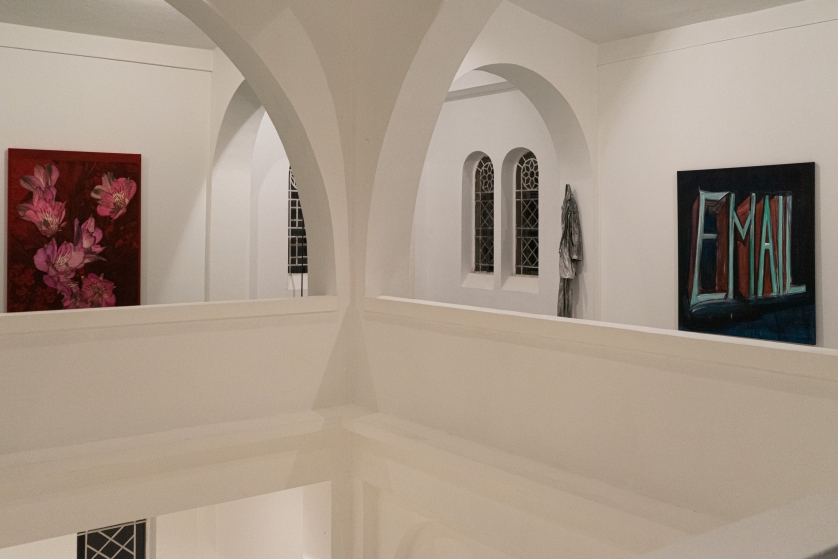 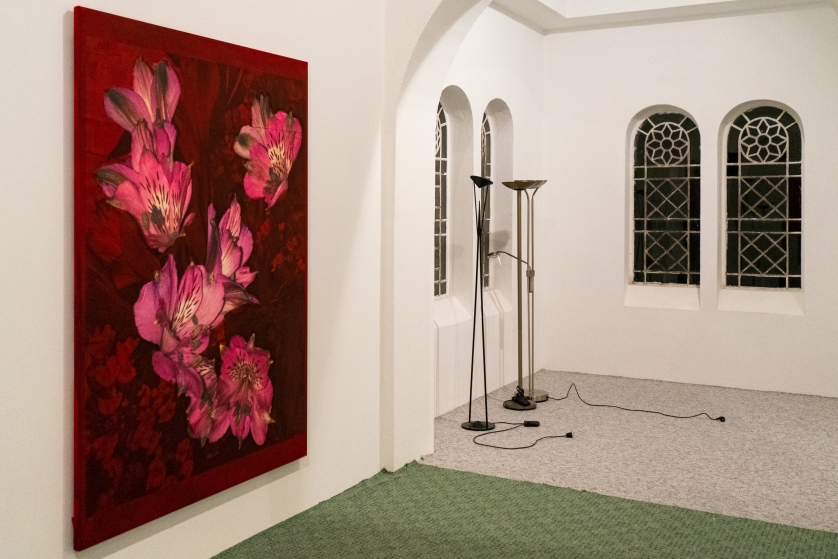 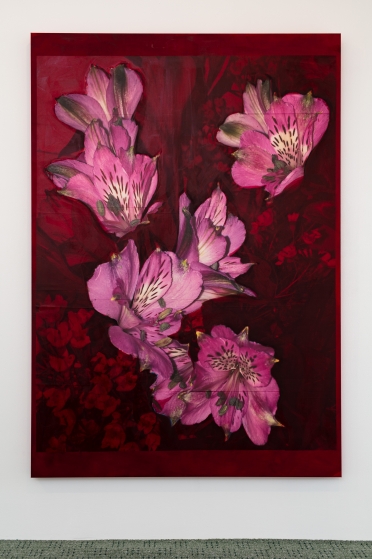 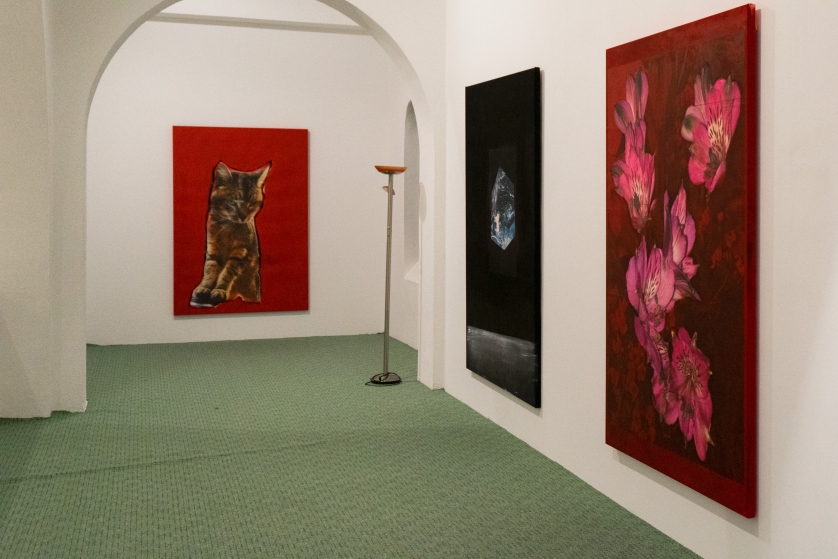 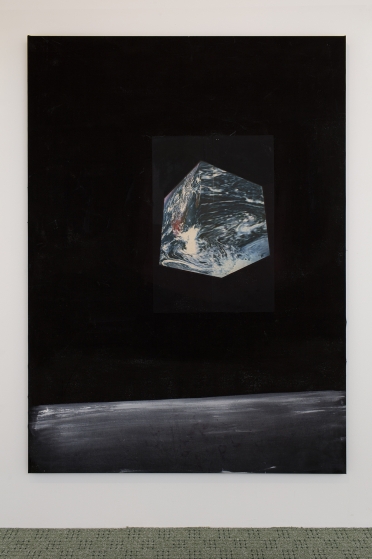 Tobias Spichtig, I have so many questions I could be an interview, 2019. Collection of Mato Peric. Exhibition view Love and die, CAC-La synagogue de Delme, 2019. Photo: OH Dancy. 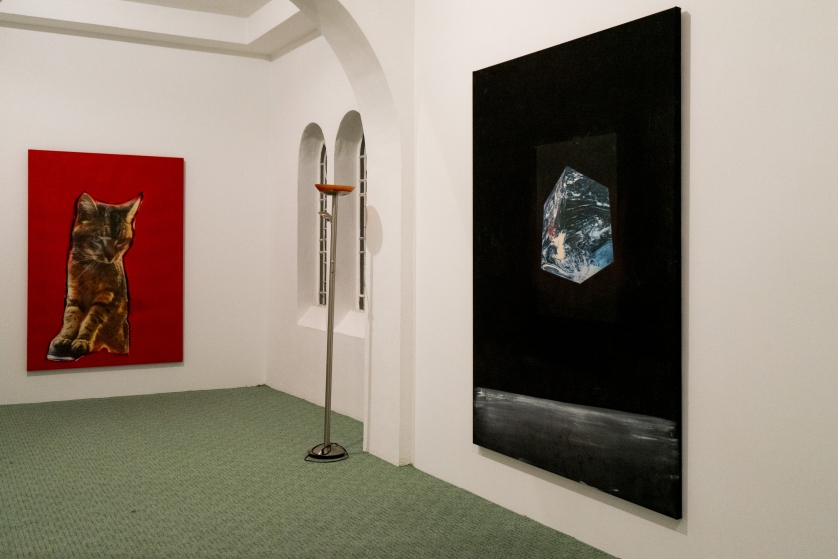 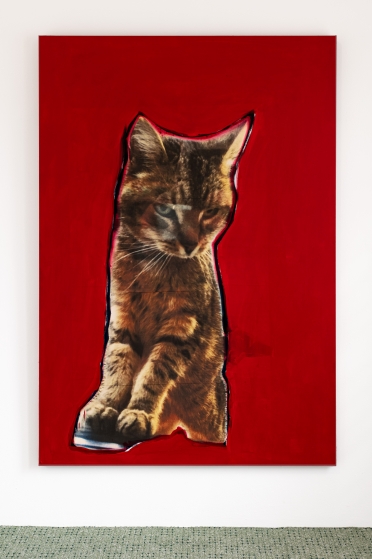 From Saturday 19 October to Sunday 2 February 2020

Tobias Spichtig creates works out of found items, waste from mass culture/consumption, images seen and re-seen, and/or sound archives heard and reheard, exhausting because of their omnipresence in our everyday field of vision and sound, emanating from advertising, the internet, commercial music, and from the big labels in cheap fashion and design. These objects/images/sounds, which are constitutive of the artist’s approach, reflect a consuming society that is frantically using and discarding consumer products. Tobias Spichtig confronts the visitor with this productivist degeneracy in our self-destructive economic system, in order to create zones of visual and physical discomfort. These objects can be obstacles that radically affect our normal relationship with art, particularly by impeding access to it (such as the large number of old refrigerators placed in front of his paintings), just as they might facilitate its interpretation, as in the case of those used sofas, bought on eBay and set up to comfortably view his paintings on the walls. From these compositions, made of various materials, the artist creates scenarios in which works and visitors play a specific role while belonging to a whole, to which the anthropomorphic presence of his “ghosts” is added, sculptures made of second-hand clothing, which he stiffens in such a way that these garments wear themselves. Camped in the exhibition spaces but also in connecting areas (such as the gallerist’s office or the artist’s studio), these “ghost sculptures” are not reduced to unsettling presences in a specific ecosystem, because they make it possible to see how clothes can support themselves once emptied of their occupants. They reveal punctured, insubstantial bodies that need no one but themselves to exist. But this abstract view of his art is entirely relative, since it is often blended with a strong presence of personal and intimist details: clothing to which he is particularly attached, painted portraits of his human and social relations, objects evoking specific moments in his life... All of Tobias Spichtig’s work is situated on the boundary between a cold, authorless, uninhabited, desubjectified dimension, and a strong dose of emotions and affects, of (self-) destructive passion.

For his exhibition in the synagogue, Tobias Spichtig was initially keen to appropriate the building—just like any object he usually salvages to create a work, image or sculpture—in order to incorporate it into the whole he is presenting on this occasion. It is reused as a second-hand object, one that has already lived several lives, including that of a place of worship for a century, later converted into a cultural space in the early 1990s. The artist makes it into a theatre that stages his paintings and sculptures, those “ghosts” that will haunt and inhabit the exhibition space for three months. Echoing this stratified view of the building, paintings (which could be characterised as “gestural”) are created with images of found, used, often broken objects, sometimes photographed by the artist himself or extracted from popular culture; similarly, sculptures reproducing the human body through resin-soaked used clothing occupy the space with their enigmatic presence. Some of these sculptures have been nickel-plated in order to purge them of all visual codes (such as logos, colours, styles, shapes), to abstract them from everyday life, just as the synagogue was emptied of objects and materials of worship during the its deconsecration in order to turn it into a diaphanous, immaculate “white cube”. Set out on the synagogue’s various levels, this exhibition encourages the visitor to be an observer who is also observed by presences without bodies or eyes, to get caught up in a zone where behavioural patterns go hand-in-hand with disquiet and decay, with regeneration.

Performance of the artist during the opening at 8pm with the partnership of Theresa Patzschke.

The exhibition Love and die receives the support from Pro Helvetia, the swiss arts Council. With the participation of Galerie Bernhard, Zurich.