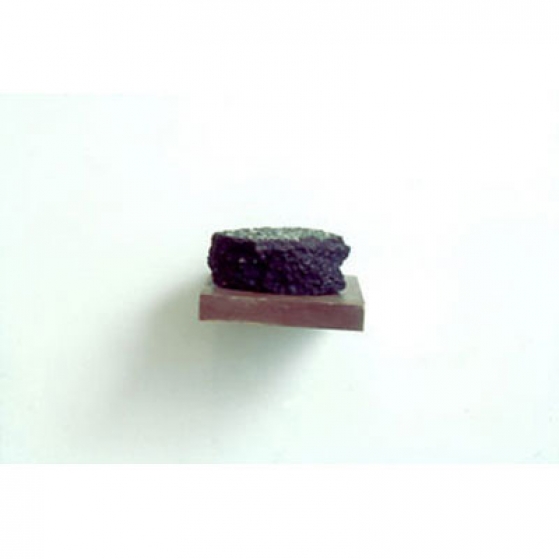 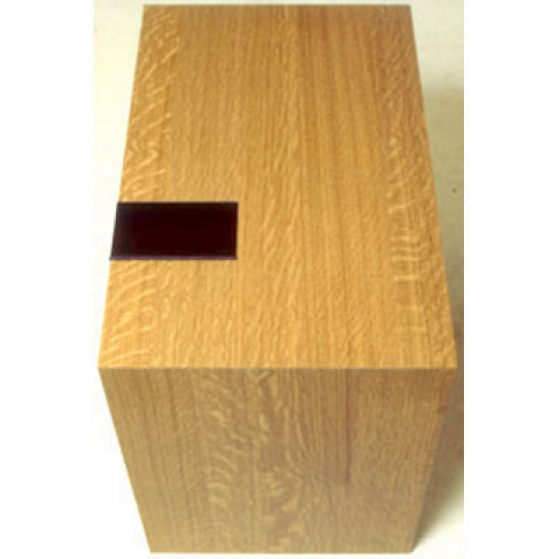 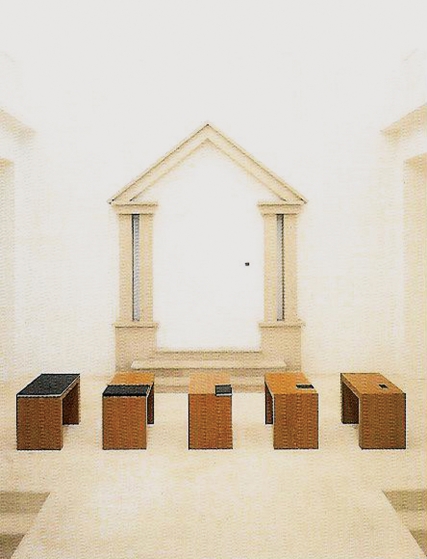 Throughout his artistic career, Michel Paysant’s imagination has been fuelled by a certain material fetichism. As a graphic artist, the medium he used to design his early works was the vinyl disc. This was back in the early eighties, and he was greatly influenced by English sculpture. Fairly soon, however, he dropped his adoration of glamour with a pop flavour from his work. He then began increasingly to prefer materials with a rich symbolic and spiritual charge, particularly bituminous asphalt, Judean bitumen, his favourite material (one that inspired both Dubuffet and Soulages). Thus at Dôle in 1985, he produced a miniature monument made up of 4 thin columns made of small mechanical lances supporting a sort of pediment in painted bitumen, a mini–temple perhaps? This bituminous asphalt has a long history, and it carries numerous religious and historical connotations, as it is supposed to have served as a material for Noah’s Ark and the Tower of Babel (the Dead Sea is actually also called the Lake of Asphalt). Half liquid, half solid, both black and transparent, dark and opaque, it condenses in the depths of its materiality the very principle of contradiction.

Between the mysticism of stone and of meaning, Paysant, who also readily quotes Smithson for the “symbolic charge of his sculptures”[1] plays on the religious symbols he blithely mixes up, explicitly creating an almost sacred relationship to art and creation. In Delme, his religio-mystical syncretism was expressed to perfection through the spiritual - historical - dimension of the building, a Synagogue. From the door, he set up a “subtle entry rite”[2], by tracing on the ground, on carpets, an asterisk, in a return to the architectural principle of the temple, based on a delimitation of sacred and profane areas. So you were entering the field of art at the same time as that of spirituality. Further on, on either side of the entrance, he arranged a hammer and a protractor. These were references to the great figures of the artist, the geologist and the architect, but could also be easily read on a different level as mystical signs, close to masonic symbolism. At the back of the room, five seats in the shape of an arch referred back to the architecture of the great tabernacle. On each of them there were black books (asphalt?), recalling the Tables of the Law. Their decreasing size was calculated according to the mathematical principle of the golden rectangle. Lastly, on the wall at the back, there burned a small red lamp, the light of the spirit?

Michel Paysant’s work readily lends itself to a crypto-kabbalistic reading, between a concern for harmony, the interpretation of numbers, loaded symbolism and highly allusive architectural games. But what most of all captures our attention is his skilful use of materials and symbols, as expressed for instance in Longissima Via, as it shows from behind the highly coded mystical decorum and plastic vocabulary what interests the artist is the way humans relate to their community and the cosmos. Michel Paysant is first and foremost a humanist.

Born in 1965 in Bouzonville, France