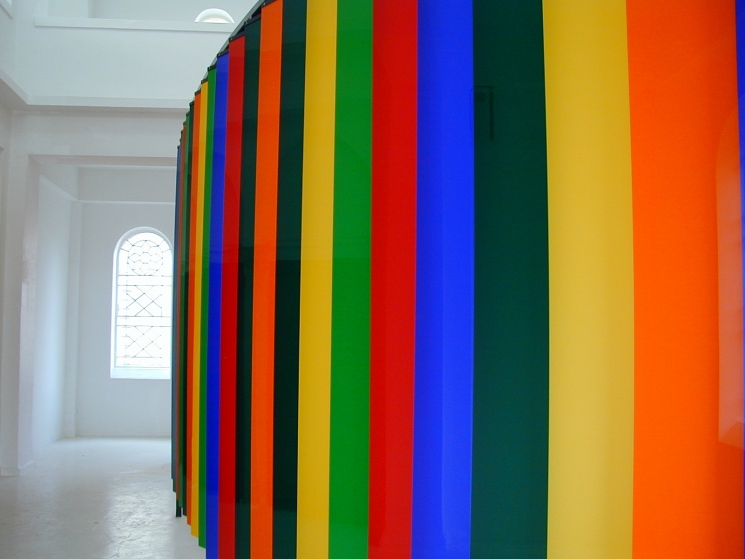 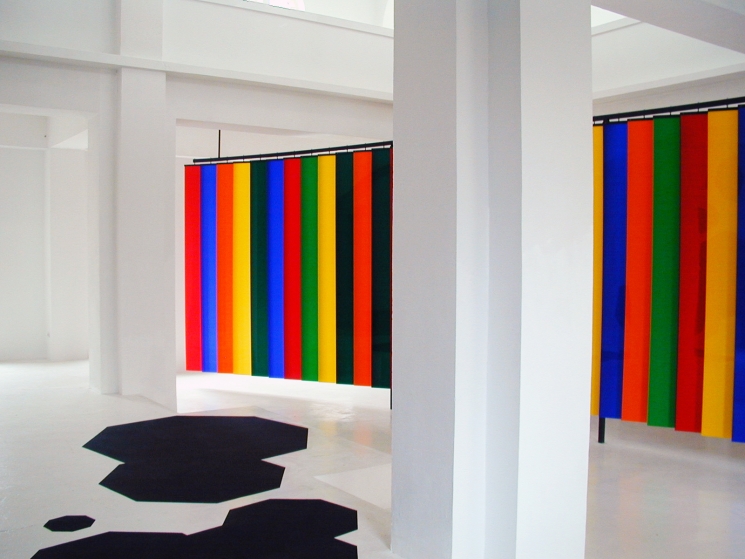 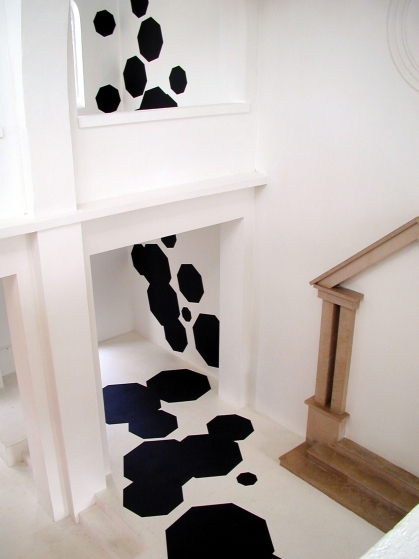 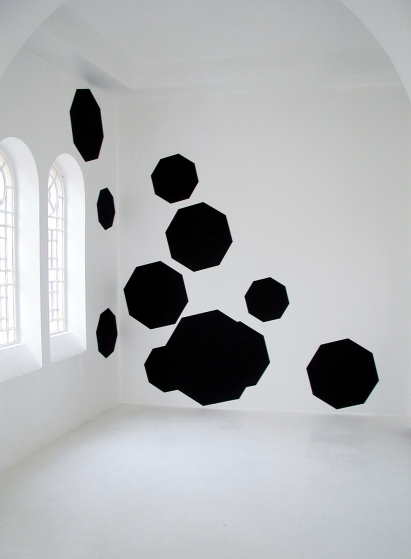 Stéphane Dafflon, who may briefly be described to begin with as an abstract painter, produces paintings, wall paintings and objects. His silent works have generic forms and coded titled - e.g. AST for “acrylique sur toile” (acrylic on canvas), PM for “peintures murales” (wall paintings), all numbered in chronological order). And yet the Dafflon style is infinitely recognizable, somewhere between minimal pop abstraction, optical formalism with a proliferation of circles and ovals, no right angles, and flashy colours in flat tints: is it pure painting?

As Olivier Mosset highlights, “painting is supposed to be pure and of course it isn’t”(1). So the visual effectiveness of Dafflon’s works serves to offer an experience of space, similar to that in the cinema, in audiolabs, Kubrickian spaceships or pressure chambers. While, like Francis Baudevin (who was his teacher at Ecal in Lausanne), he shifts from graphic design to painting, his paintings and generic objects are constantly making reference to the world of information. They are allegories of this technological and computer age that is ours and his (Dafflon learnt to work primarily on a computer, using Illustrator software, moving, for a time at least, the studio to the virtual field). In this way, like Dan Walsh, more than ever Dafflon is seriously taking the metaphor of the grid and the picture-as-screen developed, among others, by Leo Steinberg from the work of Rauschenberg in Other criteria: his works, inspired by techno flyers, computer screens, as well as the playful world of video games, work like signs of our intellectual and perceptual relationship to this world of information, a world in weightlessness, a science-fiction for today.

For Airless, at one of his first shows, Air de Paris in 2000, he reorganized inside the Air de Paris Gallery an independent space, a white cube, but with rounded corners in which the Euclidian plan disappeared while figuring the increasing abstraction of our ever fuzzier mental and perceptual world. With Silent Gliss, at Delme, Stéphane Dafflon has once again transformed the architectural space of his allocated area, literally a cube, with a vault placed on it. The best point from which to view the exhibition was the passage, which gave an overall view of this strict architectural composition in colour. Installing at the entrance to the Synagogue a large curved curtain made up of panels of plexiglas, with this large multicoloured blind Dafflon forcibly prevented the spectator from getting any perspective view on the way in. On the far wall, black octagons in various sizes were spread across the wall, tumbling down from the ceiling and proliferating almost naturally like viruses.

Such naturalization of the signs of information is the artist’s way of adapting the history of painting to that of the world; in response to the increasing abstraction of reality we have abstract painting becoming figurative. But Dafflon’s softedge abstraction is also a wise technique for gently taming our visual world, a domestication made possible by the gradual entry into Silent gliss.

Born in 1972 in Neyruz, Switzerland

Lives and works in Switzerland