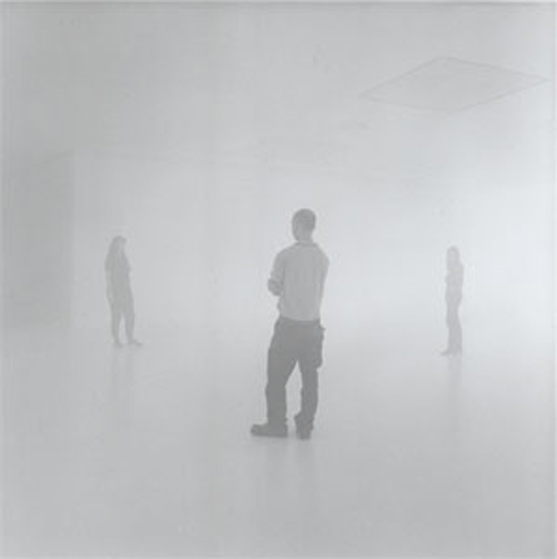 From Saturday 13 October to Sunday 9 December 2001

Ann Veronica Janssens plays on the dematerialization of the artwork by exploiting the plastic, psychological, and even mystical possibilities of light. While she makes videos or sculptures, most often her frail work is made up of environments of luminous smoke which the viewer walks into and around. These are transient sculptures to which the experience of perception, the sensory and sensual dimension are central. Her three-dimensional abstractions recall the retinal experiments of the historic avant-gardes, from Impressionism to Op Art, and her luminous sculptures (Freak Star, Donut), reminiscent of Anthony McCall’s light cones, create spaces for meditation, mental spaces.

We need to be careful. People were quick to see her installations as some form of amusing attraction made of light, a light show, a “kitsch paradise”[1], or perhaps even a reference to the misty disco night scene. But it is a “physical and conceptual fog”[2] with which she lets the viewer experiment with. Her installations do not restrict their effect to a sensory experience, they are not designed to hypnotize, but also to create the conditions for free thinking. Her installations are always distanced. Or rather, they play on a controlled mix of fascination and watchfulnesss. And the dosing varies. For Delme, Ann Veronica Janssens chose a simple, not very hypnotic device, making a smoke sculpture in natural light. The austerity of the project gave a perfect account of the dual dimension of her work, both sensual and reflective: instead of exploiting the site’s mystical potential, Ann Veronica Janssens strictly channelled them, as she did later on with great flashes of crude lighting at La Chapelle de Genêteil (June, 2006).

We do indeed need to be careful. Her refusal of materiality is engrained in the desire to avoid forcing the viewer; Ann Veronica Janssens perceives objects and materiality as constraints on both body and mind. “My approach involves this loss of control, the lack of any authoritarian materiality, and the attempt to get away from the tyranny of objects,”[3] she explains. She works at all times in relation to the context, in the tradition of the critique of institutions, staging the conditions for showing works within the Museum. It is perhaps with the pavilion Blue, Red and Yellow (2001), placed as a provocation alongside the Neue National Galerie in Berlin, that Ann Veronica Janssens set out her project most explicitly as a continuation of, going beyond, artistic modernism. The spectator entering the pavilion experienced a materialization of colour. Surface and depth disappeared, like a zoom into colour. Returning to Paul Klee’s Theory of Modern Art, Ann Veronica Janssens thus made the invisible visible. But the work was primarily site-specific, and challenging the severe, imposing lines of Mies Van Der Rohe, seemed to signify the artist’s desire to offer a coloured, soft, benevolent version of artistic modernity.

Lives and works in Brussels, Belgium