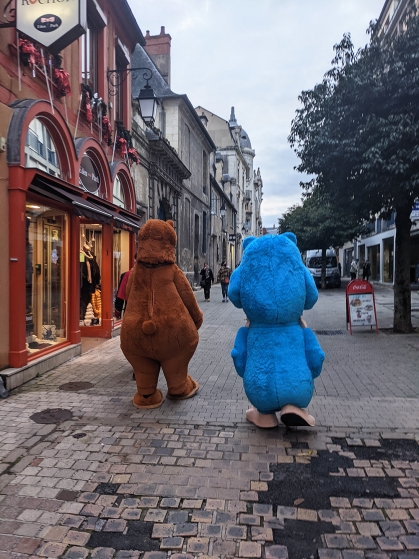 From Wednesday 1 September to Friday 10 December 2021

Perhaps it is possible to say that the idiosyncrasy of Kevin Desbouis’s art is that it has no idiosyncrasy. But that would mean confining the artist’s approach to a category that, without however seeking to extract himself from it, would not correspond to what he aims to show. Because Kevin Desbouis does not represent an artist’s attitude critical of his environment that would attempt to directly oppose any categorisation or labelling.  His approach simply does not really correspond to anything identifiable, which also allows him to escape any form of recuperation of his inconstant actions, with style, delicacy, and light-heartedness.

He loves writing poems, in succinct, sometimes brutal forms, or more episodically in a style similar to Diary, evoking clumsy, pathetic, frustrating, and laughable situations, reflections of a worn out, absurd, and confused world, yet abounding in very inspiring details for the creative spirits that find in it, as he does, the means to compose modern verses. His prose is developed based on tiny details taken from reality, those of everyday, inexpensive comfort, lowly advertising, vintage pornography with a seductive patina, family celebrations in suburbia, the late teen years and its pleasures, and so on… Without, however, falling into condescendence or disgust for a society catering to the lowest common denominator, wallowing in endless mediocrity. Beyond merely seeking inspiration from these kinds of sources, Kevin Desbouis gives them a benevolent place in his heart and confesses a sincere interest in them mixed with tenderness. From this writing work, assemblages are derived or built up in parallel, using popular or mass-produced objects, found here and there online or at antique shops. Chosen for their symbolic charge, they are installed “as is” in the exhibition space, because they suffice in themselves and reveal to audiences the artist’s feelings about his environment, often by presenting themselves as symptoms attesting to the activities or taboos underpinning them. But these objects presented in this way do not indicate any particular result after research, and eventually continue their existence elsewhere, in other contexts, if they are not transformed into something else. Because the artistic practice of Kevin Desbouis does not culminate in the exhibition that, in its seeming finitude, does not sit well with an approach that considers art as an active entity developing over time. Modes such as circulation will therefore be preferred to those of standing still, the fleeting preferred to taking root, as with some of the content he gleans on the Net and via other slipstreams enabling him to glide from one reality to another, to construct hybrid atmospheres in which the most unexpected contrasts play out. This fluidity also allows an adaptation to others, whom Kevin Desbouis does not hide the need for in his work, often operating through collaboration, sharing knowledge, composing books as a group, etc. Kevin Desbouis is an artist who does not seek to consign proof of his passage, but instead the essence of his journey, like the breathiness in his voice, which possesses the strange gift of enveloping you in a cosy sensation as he talks.

Within the framework of his residency at Lindre-Basse, the artist intends to pursue his polymorphic writing of scenarios inspired by sources around him. The village of Lindre-Basse has emerged as a script-worthy area, into which he will inject a dose of imagination, adding an extra layer of reality to a place brimming with life. For this, the artist joins forces with one H.C. Palmer, based in the United States, suggesting that he install within public space at Lindre-Basse an American letterbox that will allow him to disseminate his poetry for the first time in France. Through the unusual appearance of this foreign object in the heart of a French village, the artist seeks to establish an epistolary connection with the local residents, by sending original translations of the poems of H.C. Palmer through it, in envelopes that the locals and passers-by can open and read, if their curiosity encourages them to ponder the letterbox and appropriate the content within it. Between the letterbox representing circulation and the sharing of intimate exchanges, and a work of art within public space, this box will act as a site of liaison between beings and minds, whether they are familiar or foreign to one another.