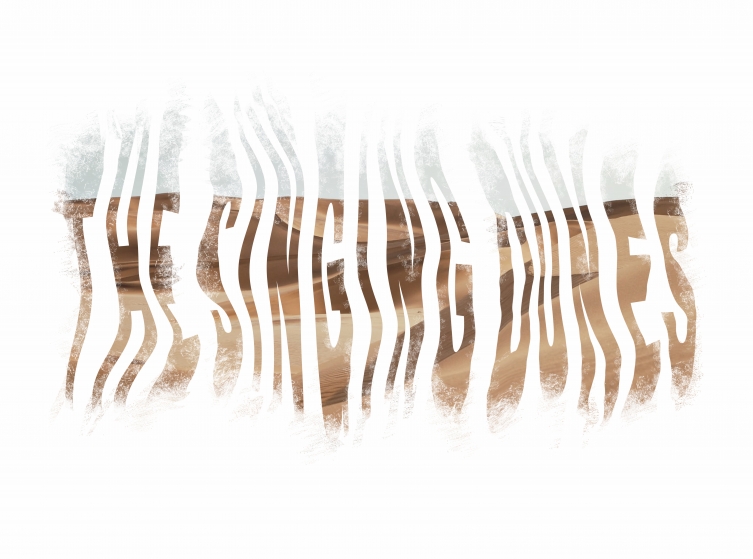 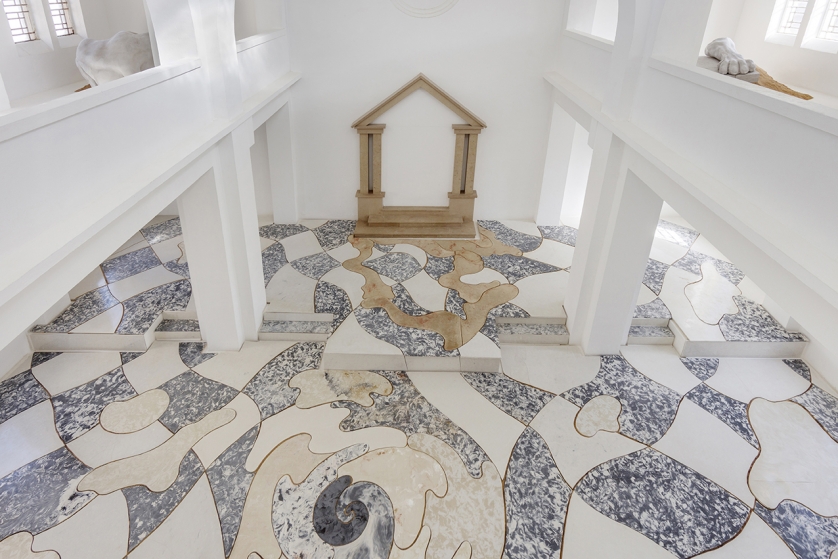 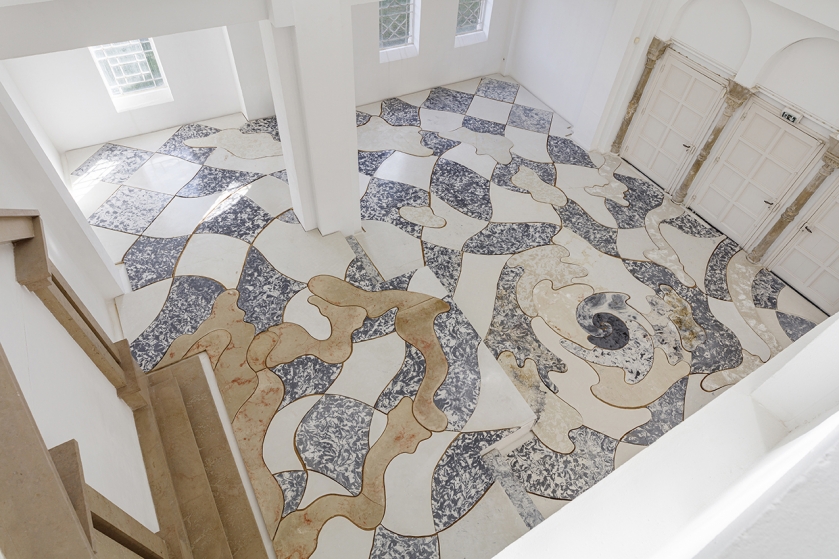 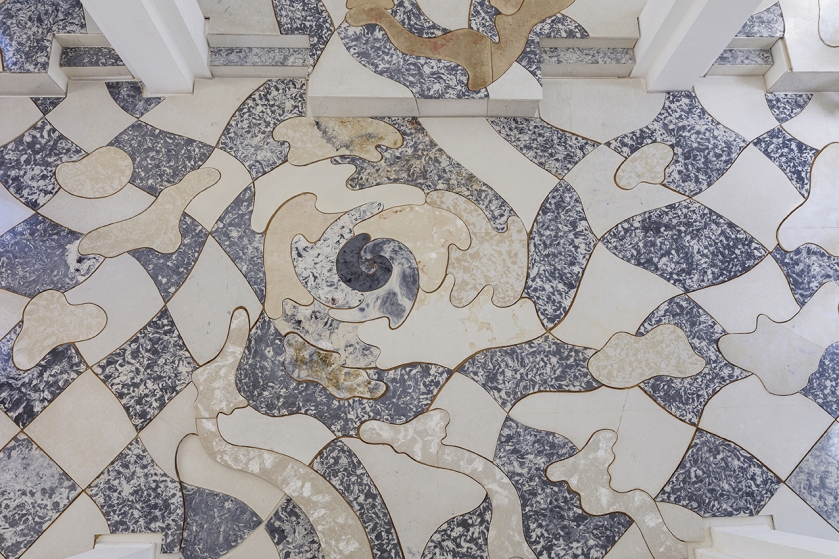 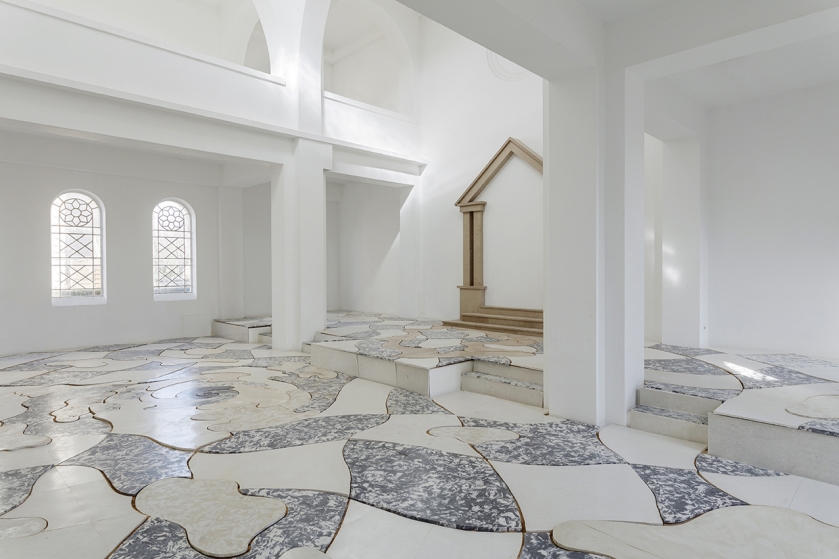 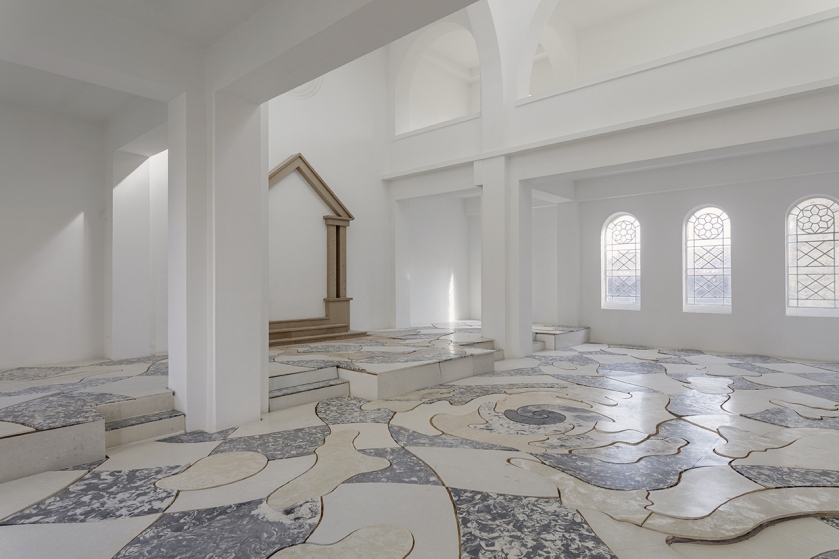 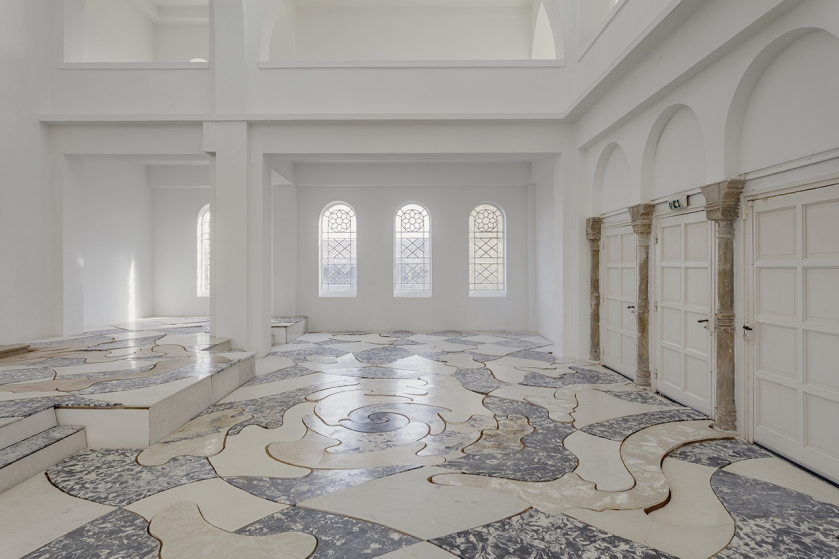 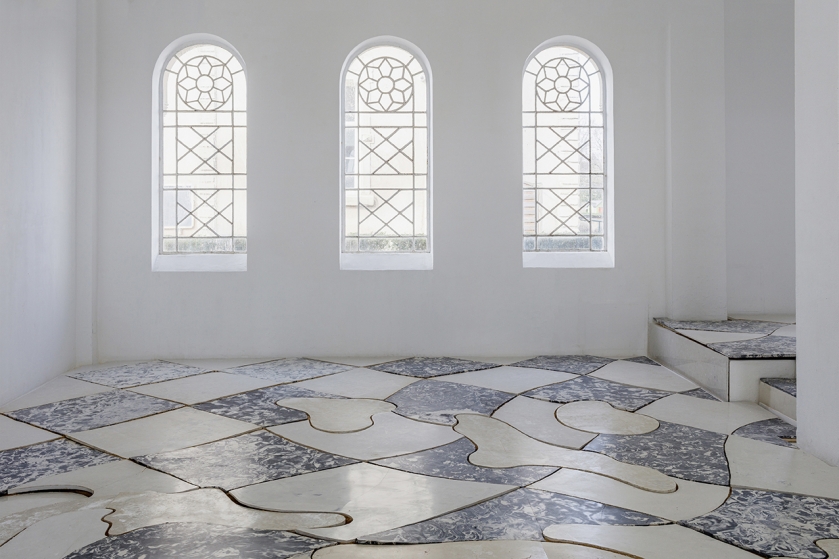 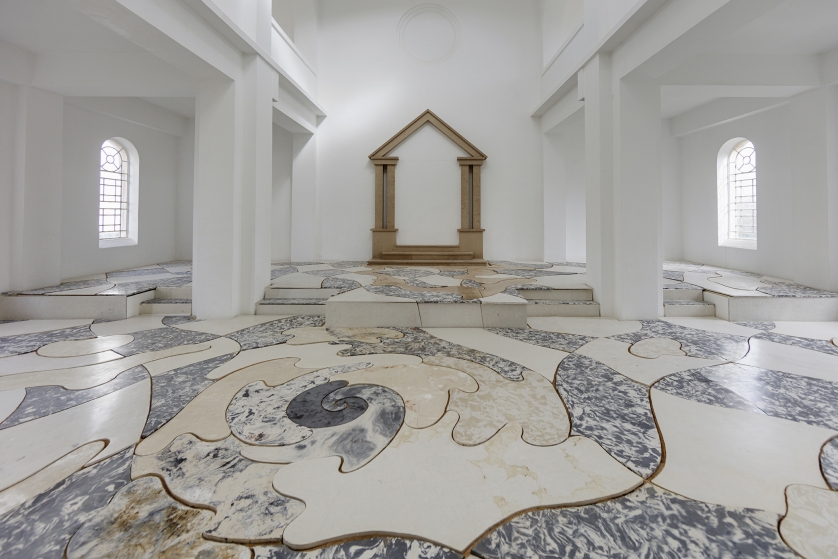 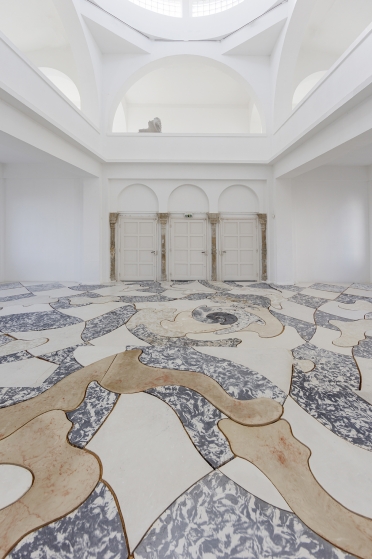 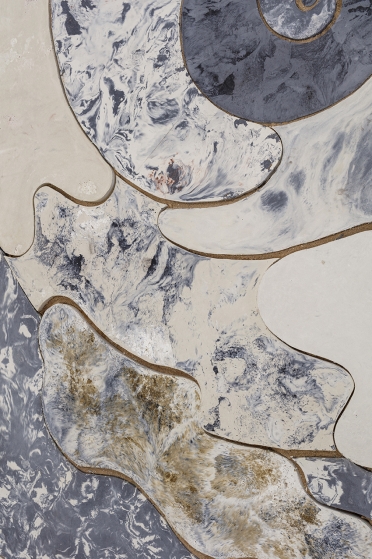 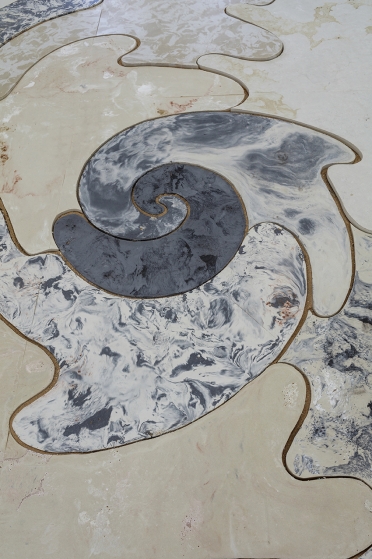 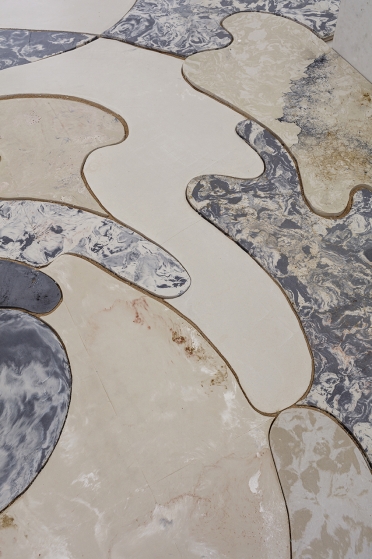 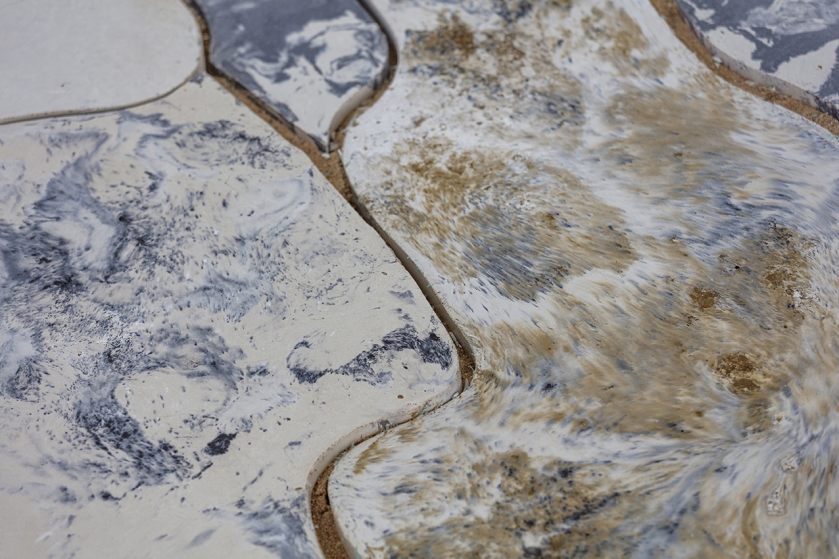 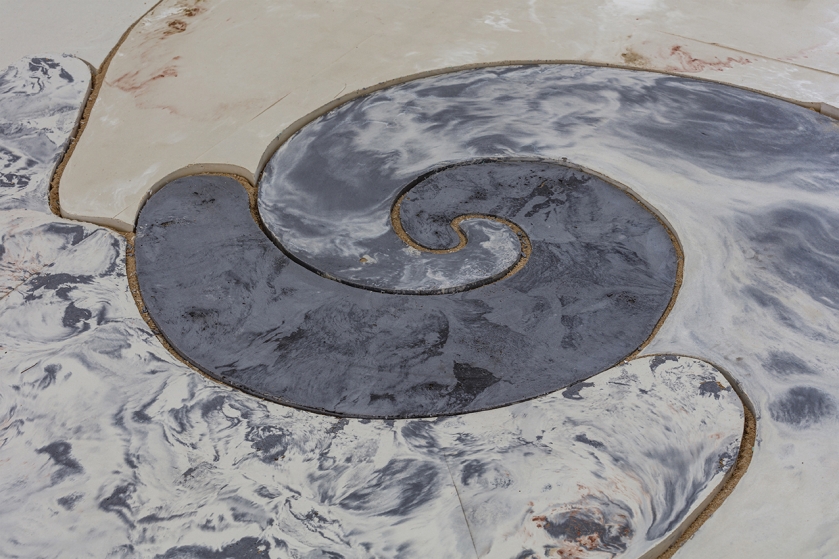 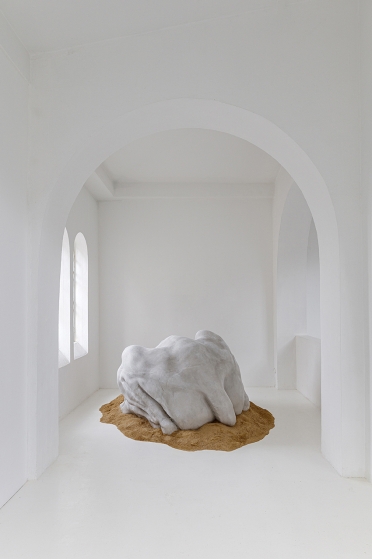 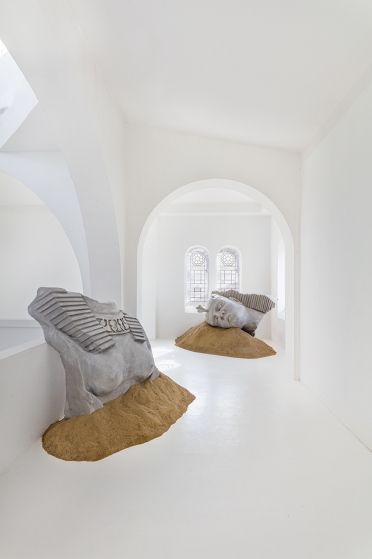 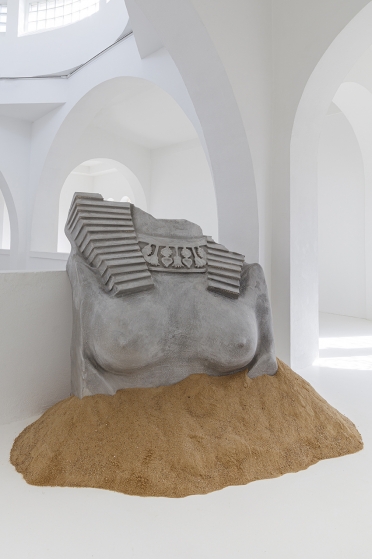 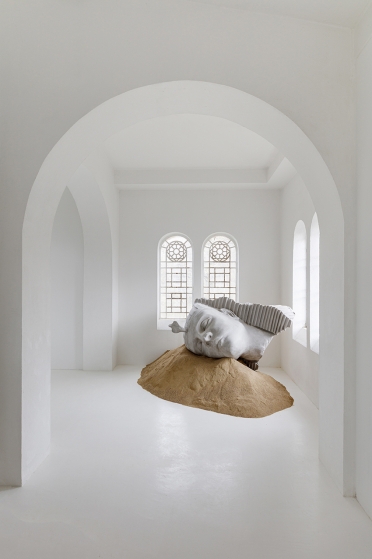 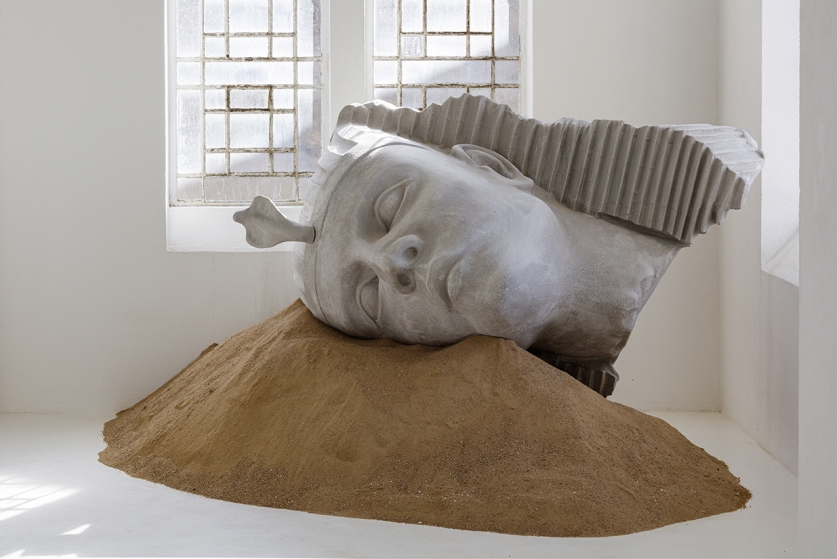 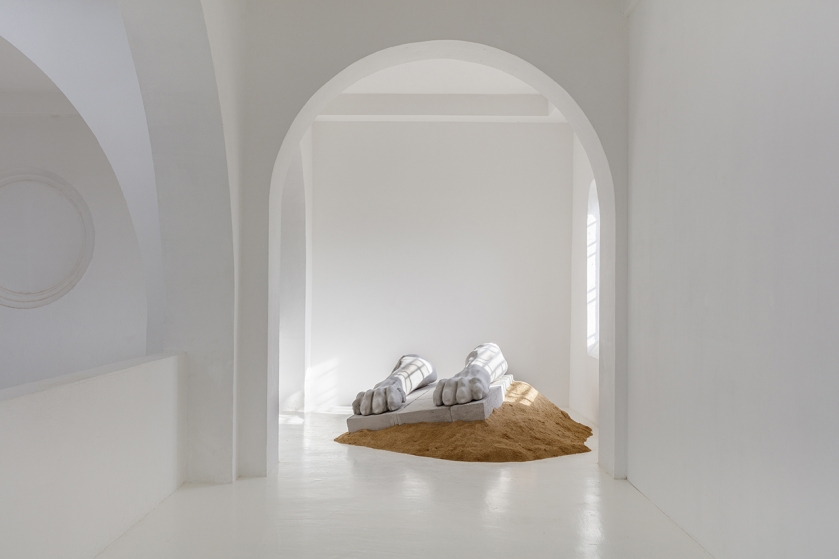 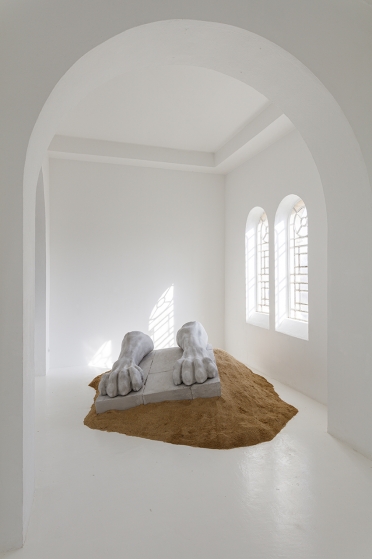 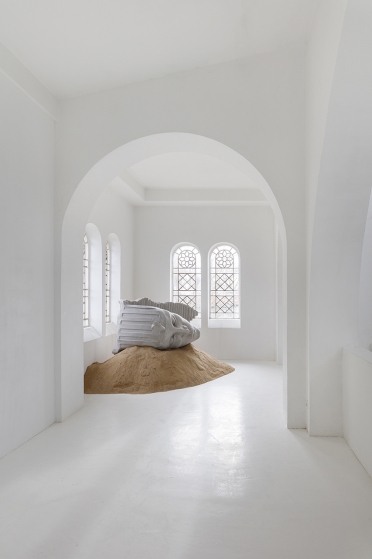 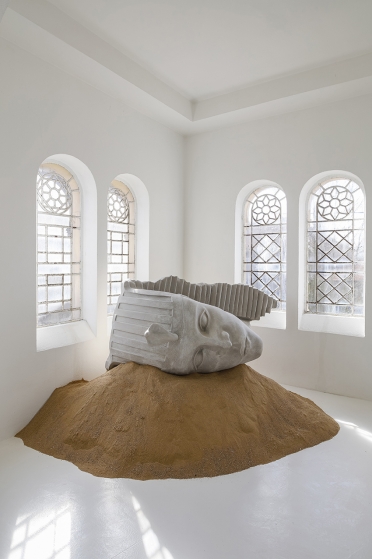 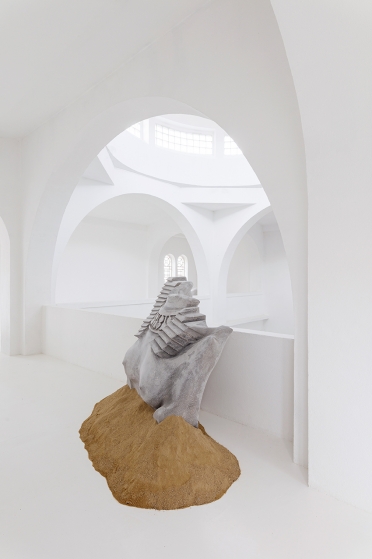 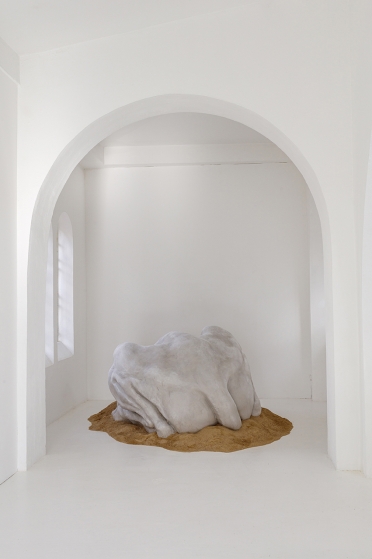 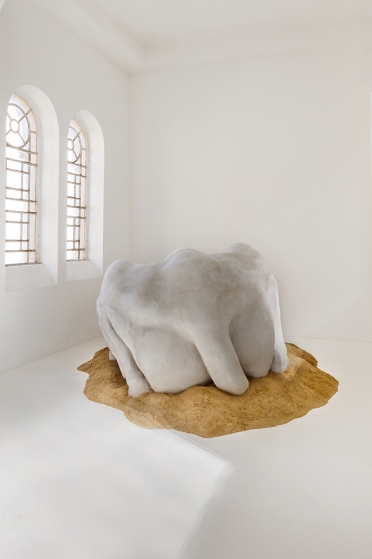 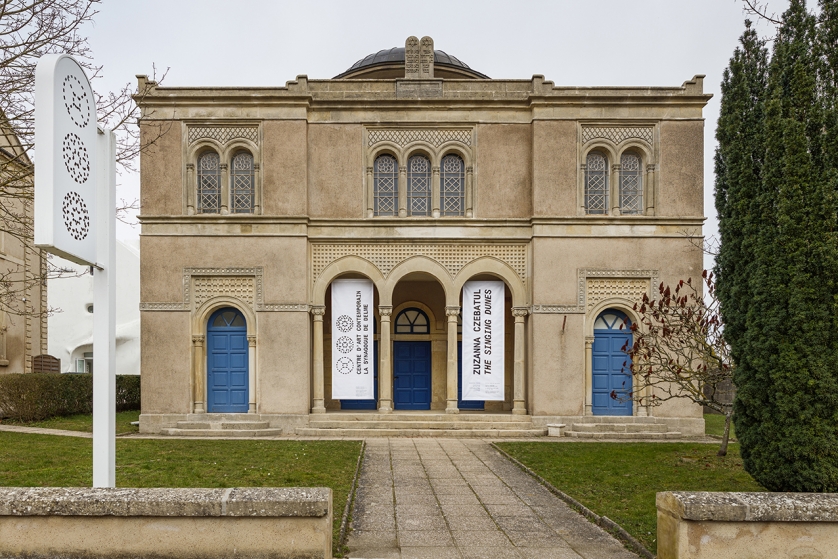 Zuzanna Czebatul operates mainly in the field of sculpture, creating pieces that blur the lines between commercial product, architectural relic, and artistic production. Her work investigates complex relationships between the viewer and the viewed. She produces her own materials and creates works that deal with different themes representing strength or weakness, depicted in their opposed forms and with a certain sense of humor and kitschy eroticism. Her installations appear in turns collapsed, destroyed, deflated, or fragmented, and question concepts such as monument, public edifice and symbolic architecture. Reality and artificiality appear in her work in a constant dialogue in which she exposes the fluidity or flexibility of politics, the art market, or the human body. Thus, her work often addresses power structures, ideologies and politics and asks the question: how do we want to live?

For her exhibition The Singing Dunes at CAC Synagogue de Delme, the artist uses the phenomenon of the singing dunes (1) and the eternal movement of sandy deserts as a metaphor for nomadism, the transformation of knowledge and civilizations, migrations, the alternation of constructed forms, and the evolution of beliefs. A monumental in situ work made of concrete and created in dialogue with the synagogue’s architecture, spreads on the ground floor. Inspired by the opus sectile technique (2), which was popular in public buildings and private homes of the ancient and medieval Roman world, this tiled floor depicts the synagogue’s original architectural elements (the Torah ark, the windows and the columns at the entrance) caught in a maelstrom that ends up spiralling into a hole. Between quicksand and psychedelic vision, this creation constitutes a monumental, luxurious floor, worthy of the building’s decorative features, which have long disappeared (3). At the same time the work recalls the movement and inherent fluctuations that accompany the passing of time, altering and transforming forms, knowledge and culture.

The metaphor takes its course upstairs, where a collection of sculptures represents vestiges of a pseudo Egyptian antiquity, excavated from the desert. Replete with historical inconsistencies and with fantasized visions of ancient Egypt (4), these fragments, once reconstructed, are meant to replicate a female sphinx from the blockbuster movie The Ten Commandments by Cecil B. DeMille (1923), one of the most expensive productions in the history of Hollywood. This epic staged an entire, constructed city as a film set that, because it was difficult to store in studios, was deliberately buried in the California desert, until its remains were rediscovered by archaeologists in the 1960s. Thus presented, these (fake) sculptures reproduce the specificity of an archaeological excavation, as if they have just been dug out of the sand, while mimicking the situation of a museum display, where these vestiges ended up eventually. Staging an archaeology that is just as artificial as the rediscovered film set, Zuzanna Czebatul places several historical strata on the same level: Egyptian antiquity, the Jewish exodus, Hollywood cinema, contemporary archaeology, and current human migrations. Their proximity, embodied by the physical and metaphorical presence of sand in the exhibition, evokes a seemingly endless postmodernity, as well as the way history and ideologies fluctuate alongside power shifts. Zuzanna Czebatul confronts us with our contemporary era’s “desert of the real” (5), where the origins of power are not as natural and neutral as they appear: they usually spring from multiple fictions produced arbitrarily. From time immemorial, culture has been concealing the ideology of the day. It is up to each of us to identify it.

(1) The sound produced by the friction of sand grains during the movements of dunes in the desert.
(2) An ancient artistic technique where marble, mother of pearl or glass were cut and inlaid into walls and floors to make a picture or pattern.
(3) The synagogue was blown up with dynamite by the Germans in 1944, leaving only the outer walls.
(4) In Egyptian Antiquity, female sphinxes did not exist. There were only sphinxes that had strictly male physical traits.
(5) Expression by Jean Baudrillard, extracted from Simulacra and Simulation, Semiotext(e), New York, 1983 [1981].

The exhibition is supported by the Institut Polonais, the Goethe Institut Nancy and Dyckerhoff. 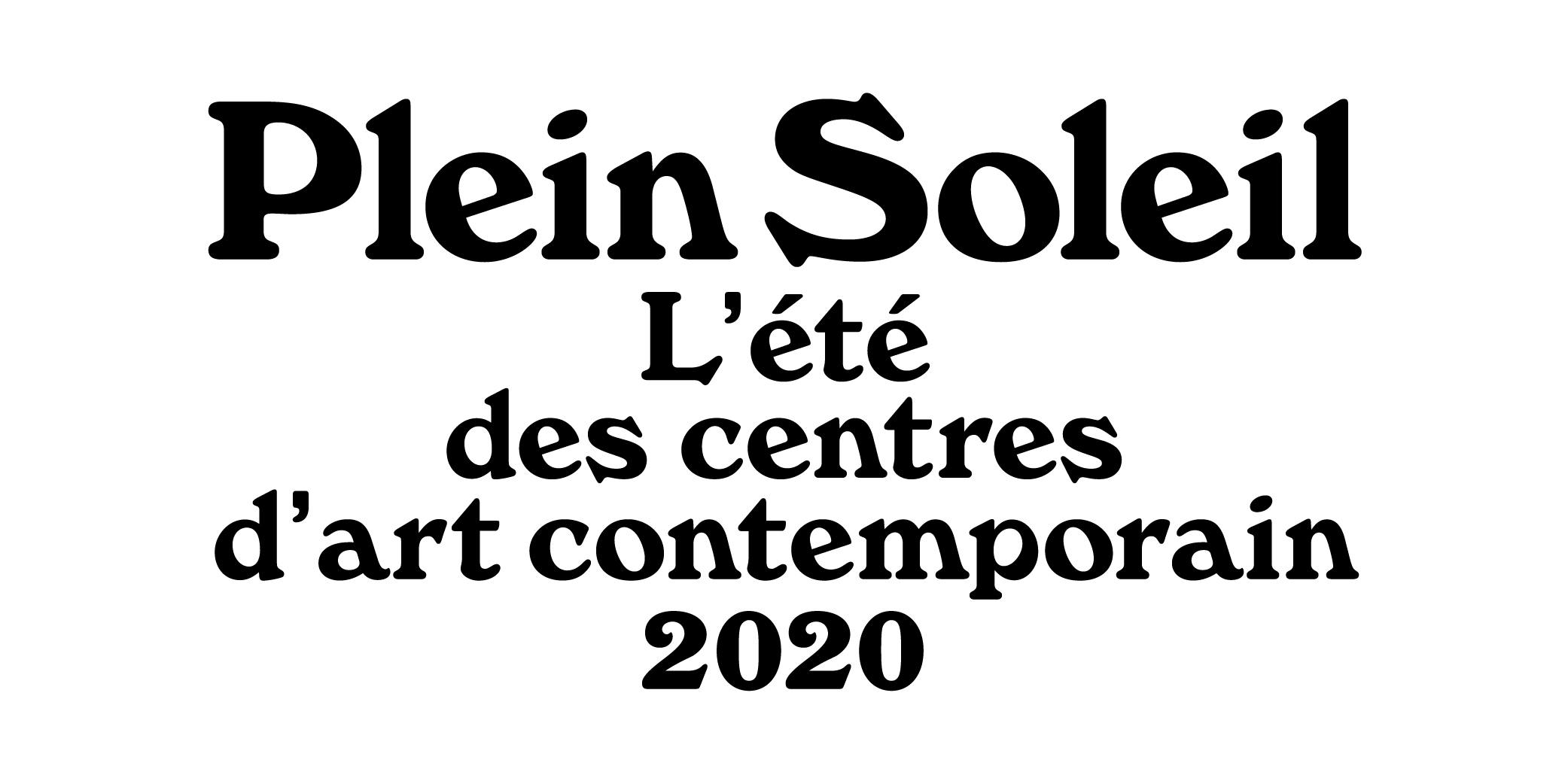 The CAC – la synagogue de Delme and Zuzanna Czebatul would like to thank Esther Mikuszies and Julia Viering as well as the entire team of the Goethe Institut in Nancy; Anna Biłos and Natalia Barbarska at Polish Institute in Paris; students from ESAL-Metz, interns on the installation: Julie Ibrahim and Olivier Petitprez; Valentin Wattier for his precious help; Adam Tailleur, student from the collège Saint Joseph La Salle Auxerre ; the municipal employees of Delme for their patience and for allowing us to use their workshop for a month ; SISTROM ; Dyckerhoff ; Jean-Jacques Dumont; Philippe Brunella and public program services at Musée de La Cour d’Or in Metz ; Tourism’s office of Saulnois.

Zuzanna Czebatul was born in 1986 in Międzyrzecz (Poland). She studied at Städelschule, Frankfort and Universität der Künste, Berlin. She lives and works in Berlin.